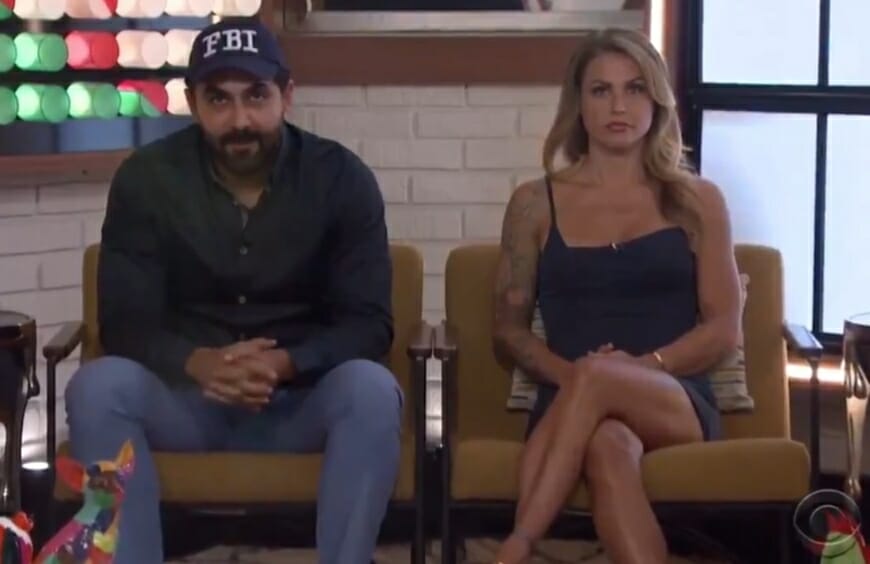 A firework just blasted off in the Big Brother 22 house leaving alliances in tatters. A legend is booted out and this week’s HOH can determine the course of this season.

Just kidding. As much as I would like to put him first, that would be silly.

Actual #1. Memphis – The creator of the most powerful alliance of the summer (Cody, Tyler, Dani, Nicole F, Christmas, and Memphis) has played a near flawless game. Memphis is tight with Christmas and he isn’t even targeted by most of the house. Ian is now more wary of Nicole and Dani while Memphis’s friends on the outside of power are gunning for his counterparts, not him. Memphis played his HOH phenomenally, setting himself up for weeks to come and it’s showing.

2. Cody – Cody is already in the ear of current Head of Household Christmas Abbott. Christmas told Tyler she intends to put up Bay. A likely second nomination is Da’Vonne. This is maddening for a lot of people (including myself) who sees the whole house and the complex relationships within. However, the houseguests don’t see what we see. Cody is in a great position protected by Nicole, Dani, and Xmas. He has a power alliance with Enzo and Tyler. Expect Cody to keep riding the wave of power he has enjoyed since early August.

3. Tyler – The S20 runner-up is showing what made him special in this year. He utilizes every tool he has to mend and enhances relationships each week. Tyler has a great pulse on the house for someone who as he once said himself, “doesn’t want to be here.” He will probably lose one of his soldiers in the war against Cody/Nicole this week with Bay or Day in all likelihood going home. However, I have faith that Tyler will still be able to recoup his loss.

4 Nicole F – Did anyone notice how frazzled Franzel was after Kaysar’s goodbye speech? Her vote was quick and she was disrespectful to Julie in getting up so quickly after saying Kaysar. Even Julie was stunned for a second I think because she was “oka-“ when she was gonna be like “ok, thank you.” Now, I say all this but recognize Nicole’s placement in the power tier. She is protected by many people and Christmas won’t put her up even if she was the only option.

5. Dani – Her game blew up due to Kaysar’s final remarks. Yet, Dani will slide by this week comfortably. She has a strong relationship with the HOH, she has a power player in Cody supporting her, and she has jury votes in Nicole and, probably, Ian (assuming Dani makes it to final 2). Dani lacks something that could really bolster her gameplay: subtlety. That’s the reason she has never been #1 on this list and that’s why she is not better than Nicole F or Tyler.

6. Christmas – All right, now we get to this week’s HOH. 6 places down. Unfortunately for Christmas getting rid of anyone but Dani is a lack of an HOH reign in my opinion. Christmas does not realize that one person cannot take down 2 or 3 groups without winning vetoes every week. Nobody has won comps back-to-back yet this season. If she gets out Bay or Day, it’s a domino effect leading to the other’s eviction. Christmas is a physically gifted player that won a safety suite earlier this summer and now adds the title of week 5 Head of Household to her BB resume.

7. Enzo – Last week’s HOH will be safe this week. He played a smart game by keeping his alliances happy while not becoming a target for anyone. He forced the next HOH to take the first shot if Christmas ultimately decides to.

8. Ian – The S14 winner has started playing. He showed a piece of his extremely intelligent mind in last night’s episode. By selling his information to Kaysar, and then Kaysar burning it immediately, no one (except for Bay) knows where he got the information from. Bay confronted Ian about talking to Kaysar, but I consider that conversation to be a knock on Bay and not Ian.

9. Da’Vonne – Momma Day is in jeopardy this week. She will more than likely sit alongside Bay on the block. Christmas seems to be targeting Bay this week. Da’Vonne might have begun playing aggressive too late. She was more suited to take down Dani/Nicole when Janelle/Kaysar were in the house. Unfortunately, she was too scared to make any moves then. Now, each day seems to indicate her time this season is coming to an end sooner and sooner.

10. Kevin – The penultimate floater this season, Kevin is primed to ride out the middle for a while. The house is clearly fragmented between Bay/Day, Cody/Nicole/Dani, and Tyler. With a recently made deal between Kevin, Tyler, and Christmas, Kevin is positioned well.

11. David – This guy never seems to be anyone’s target. Tyler didn’t want to shoot for him on HOH, Enzo missed his shot, and Christmas is going for Bay by all indications. He might not know what he is doing, but he is doing something right. Imagine if David has been tricking everyone this whole time and watched all the seasons, memorized comps, and just intentionally played dumb… how crazy would that be?

12. Bayleigh – While it wasn’t shown o the feeds, Bay and Dani apparently got into a fight and Bay punched a hole in the bathroom wall. That is the last thing Bay should have done and the best ammunition Dani needs to throw her under the bus. We may be in for another Bay meltdown like in S20 and CBS’s The Challenge.

13 Kaysar – The perpetual pre-jury America’s Favorite Player, Kaysar, showed America why so many BB fans loved him, love him, and will always love him. This too, like Janelle, could be the last time we see Kaysar walk through the doors in Studio City or wear his FBI hat, or have deep conversations about society in the house and in the backyard. After 3 seasons, iconic moments, and winning my heart over, I need to say thank you to Kaysar for being part of the old school group of players who sustained Big Brother on network television. He is a master strategist, but like Dr. Will Kirby once said, Kaysar might not be suited for the game of Big Brother. However, his legacy as a 3 season, 2-time all-star makes him a BB legend. Evicted week 4.