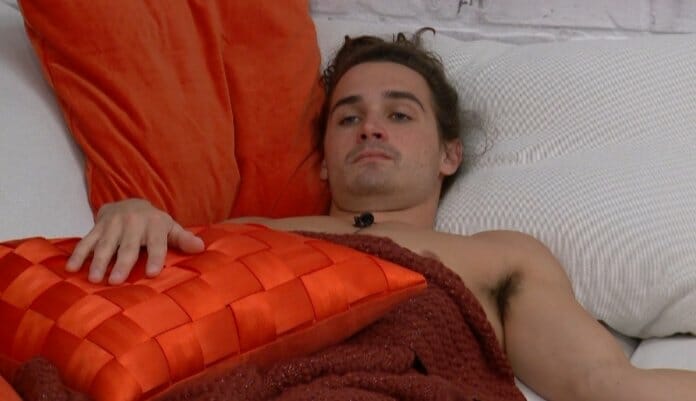 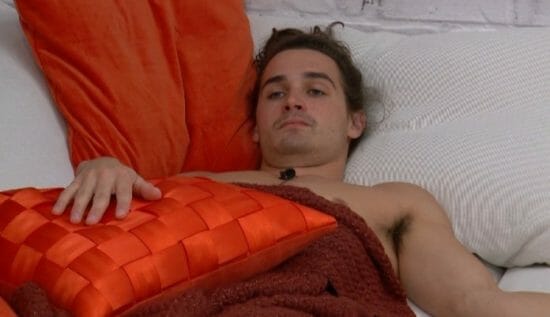 Good afternoon, everyone! Drama is heating up in the Big Brother house, and things are close to coming to a head.  I am not sure they can last until next eviction without a blowup. The tension is high, and I think it will take one wrong look from Justin to Monte for it to blow.

Before I begin a slight recap of last night, I want to say I’ll be sad if Shane goes home this week. While I love Alex’s gameplay this season, and think she’s everything I expected out of what I thought the BB18 females would be, losing Shane would be losing such a mellow presence. Listening to him talk (when he rarely does), it sounds like someone you’d hear at 3am on NPR talking about something boring like the VP debate.

Ok, about the tension. Monte does not like Justin and he’s clearly at the stage where he’s looking for stuff to be mad about.  Last night, Monte was in the bathroom talking to Morgan when Justin came in to take a shower.  Justin made some comment about not losing, and stripped naked before hopping in the shower. While he supposedly covered his junk (none of this happened on the feeds), Monte took it as an insult to him. It was some serious alpha male shit going on with Monte raging because he thinks Justin did that to show he has more alpha in front of Morgan.  He said something along the lines of “Justin knows we’re close and you’re kind of my girl, so he did that to show he’s macho in front of me”.  Monte then went on to call Justin sexist to anyone who would listen while Morgan just kind of brushed it off.

I’m not defending Justin, the dude is certainly creepy, but Monte was clearly exaggerating either purposely or because he really believed that was directed at him. I’ve seen Justin do the same thing when the bathroom was empty, so I’m not so certain he did it intentionally or not. Now, this was about 10 minutes after Justin was going off to Danielle and Shane about Whitney’s lips and how he’d love to shove his … in them. He said that because the pair told Justin that Whitney has been around him more lately, so she may be into him (she’s not).  Regardless of that, Monte is just blowing this all up and trying to manipulate ‘his girls’ to do what he wants.  They’re not going to.

After raging for an hour or two, Monte came back into the HoH room to tell Alex to keep Shane and Danielle safe because he ‘made a deal with them’. He followed it up with “of course, it’s up to you”, but he kept pressing the issue for whatever reason. The big deal he made was that Shane and Danielle will vote whatever way the girls wanted if they are kept safe this week. That’s it. No future safety, no future allies, just the two voting however they want.  The only way this even closely makes sense is because of America’s nominee, otherwise Alex can just nominate two people she doesn’t mind going home.  Whitney pointed out how there won’t be many people left after the four girls, shane/danielle, and Monte, so that increases the odds of one of Shane/Danielle’s friends being the new target, and Whitney doesn’t believe they’ll vote out their friend.  They can make whatever deal they want, but once they’re safe, they can vote however they want.

Using that deal, and using Alex’s promise not to nominate Neeley, that leaves Jason, Justin, Kryssie, and Scott as available nominees. Justin would most certainly become the target in that case, and there is no way Danielle and Shane are voting him out.  It’s a dumb deal, and Alex knows that. It’s just surprising that Monte kept pushing it for so long.

Alright, that was longer than expected, feeds:

Time to close this thread and watch some TV.  I forgot to mention it, but I have guests flying in for the week beginning Sunday. Well, my wife does. This means I should be able to skip out on a few days and watch the feeds, and I’ll definitely be able to post nightly recaps. I’ve been in contact with a few people who offered to write, but I don’t know if they’re watching this season. If anyone watching who is able to post occasional updates with timestamps *cough* Caryn *cough* let me know either via email or contact form.