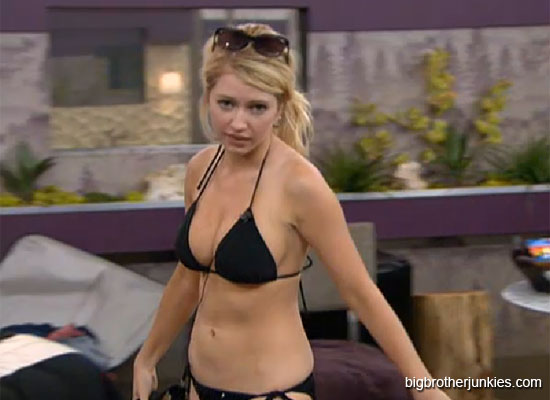 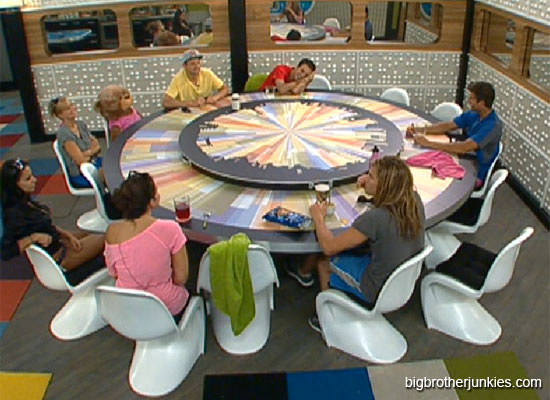 It’s been a relatively quiet day in the house, which usually leads to plenty of scheming and planning later on tonight.  Right now on the live feeds, a lot of the houseguests are chillin around the kitchen table chatting about various things, including Dan’s lame book. You can watch along with me here 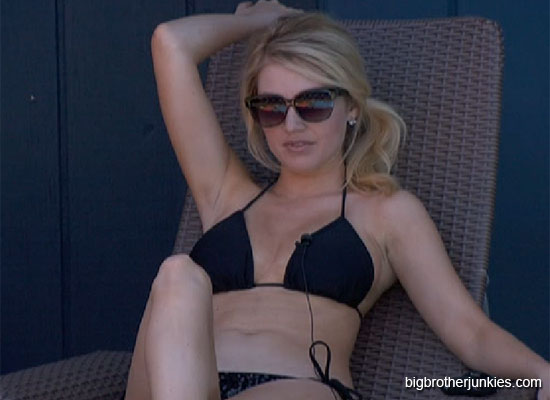 Outside, you have Janelle and Britney hanging out in bikinis with Ian who hasn’t seen that much skin since his human anatomy class in college.  I wonder if he’ll be sitting there with a book over his shorts soon.

3:03pm bbt – Still relaxing time by the pool.  No drama, but if you want to see Janelle, Danielle and Britney in their bikinis, it’s a good time to sign up for free to the feeds.

Slip update – since it’s the bikini thread so far, JoJo had a bum bum slip yesterday.  Flashback to Friday 13, 8:50pm bbt to catch it.

3:10pm bbt – Willie and Danielle are up in the HoH room talking about a few things.  He is trying to keep a little sub-alliance with her as well, kind of playing all sides of the house right now, but I’m not really sure it’ll stick.  She did, however, tell him that Frank is plotting to get Willie out.  I have a feeling a blowup is going to be happening soon.

Willie then asks if Danielle if she was throwing the veto competition, and she denied it.  She tried to make it sound like she was actually trying (she may have been) which has been the huge catalyst between the Britney-Janelle vs Boogie-Dan factions.

3:22pm bbt – Britney comes in the HoH room and tells Willie to calm down on the game talk.  She has a point, he is playing the game hardcore. 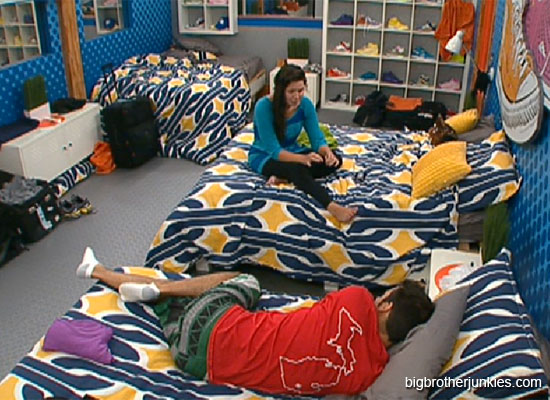 5:14pm bbt – Sorry about the long delay between updates, Danielle and chatting it up with her buddy Danny in the bedroom about strategy.  Reporting to him about the situation between Willie/Frank, etc.  Check out the live feeds to see more

8:00pm bbt – A little delay but not much happening right now on the feeds. Willie is (shockingly) up in the HoH room with (another shocker) Britney, as well as Shane, JoJo and Janelle.  He’s giving them a pep talk about how one of them needs to win HoH this week, and he’s probably right.  That group is quickly becoming the power players in the house as each day passes.  If anyone from Dan or Booger’s teams win, things could shake up a little.

Gallery after the jump

I’ll be updating this thread as things change, new images, etc. So keep refreshing or following me on twitter and I’ll let you know when I update this thread.