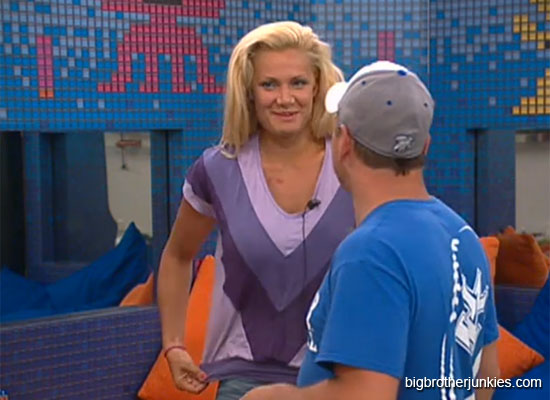 Big Brother 14 – Coach Competition And Have Not Results

It appears the coaches competition came down to Janelle and Boogie again this week as apparently Dan threw it once again and Britney just flat out sucks.  That’s not the most interesting part of the situation, the big news on the live feeds is that Willie is a have-not and is losing his cool badly.

I’m not sure what the competition was yet, but Janelle winning isn’t as big of a deal as Willie being placed a have-not for the week.  He’s already sitting at the table sulking while eating his pork rinds and apparently slamming doors and acting really upset with everyone.  We all know if you’re a Hantz that makes you an automatic sore loser, but a have-not before being evicted?  There is going to be some fireworks on the feeds this week.

Your first 3 days are free!

Things are so bad in the house that Joe feels that Willie is going to try and really fight either Frank or himself in order to try and get kicked out of the show.  If he does, what a poor sport baby and no Hantz should ever be allowed on TV again.  The guy put Frank up for eviction then foolishly tried to save him and it backfired.  Now he’s upset?  Come on.

I’m also reading that the winner of the coaches competition was able to pick all the have-nots this week, unlike last week.  Janelle chose Willie, JoJo and Shane and then Ian also volunteered.  I probably would too, I love pork rinds!