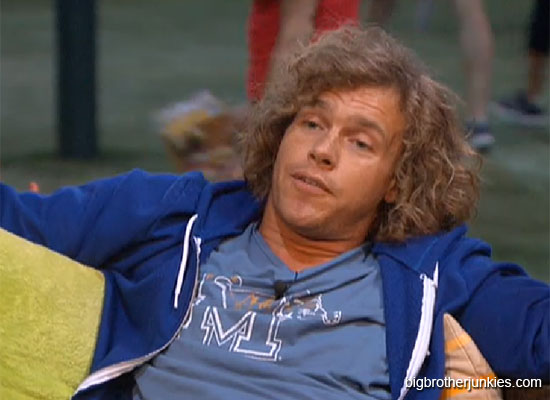 If you have been reading my blog,  you already knew about the fight last night between Frank and Willie, if you haven’t been, well you should be!  Just kidding, tune into the live feeds and use the flashback feature or read about it more in my post.

The big question I had coming into the day was how the aftermath was going to be.  Willie clearly flipped his lid, and I wasn’t sure if it would have turned off some people like Ashley who has been getting close to him over the past few days.  I turned on the feeds today, and it appears my question has been answered..

More info after the jump

As soon as I turned on the feeds today (got a late start), I see Ashley hanging out with JoJo and Shane in Willie’s room. Question answered… Ashley really likes that alliance and appears to be sticking with it, while JoJo and Shane never left his corner.  In my previous post, I said that Ashley would be the swing vote, and on paper it will still remain the same, however my question also lies with Danielle.  She’s a very weak link, and a huge follower.  If Britney and/or Willie do not get to Dan over the next 24 hours, Danielle may very well believe the hype and simply vote for Kara to stay with the house.

I know Danielle wants to keep Kara, but we seen last season that the weak minded people (and there were a lot in BB13) easily follow the herd instead of trying to make waves.   So it will be kind of ironic if all the fighting Willie did to keep Frank ends up working despite him now trying to get Frank out simply because they forgot Danielle.

1:55pm bbt – Frank is in the bedroom awkwardly flirting with Kara, probably trying to get a piece before one of them is out the door tomorrow.  Joe enters, Kara leaves and the two start discussing the swing vote Ashley.  Both of them have noticed her spending time with Willie, and apparently they’re going to keep working her.  Right now they’re both very confident in Ashley’s vote, but I’m not so sure they should be.

If you want to know who is going home tomorrow before the votes are cast, watch the feeds tonight and tomorrow and study Ashley and Danielle very close. I know I’ll be trying to do that despite my nerves about going back to the dentist tomorrow.

But here is how the votes stand:

I’m not sure how much I’ll be able to blog over the next day because of anxiety over dentist (don’t laugh) but I’ll do my best.  Right now, that’s where the house stands.  I’ll still try to make my weekly prediction thread tomorrow that I did last year.

Gallery of some snapshots today…

ABOUT US
FOLLOW US
©
wpDiscuz
1
0
Would love your thoughts, please comment.x
()
x
| Reply