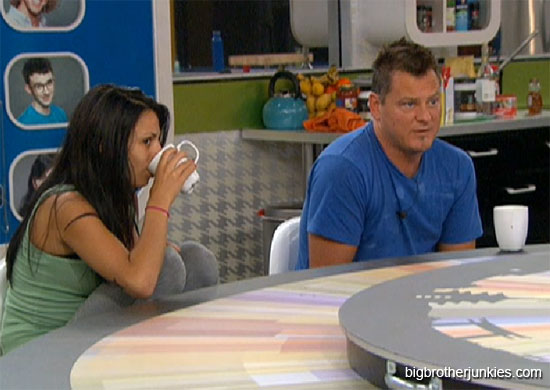 Big Brother 14 – Making Sense Of It All

I’m off to a late start this morning, as I’m still trying to wrap my head around what is going on in the house.  It appears the game is well underway from what we saw last night on CBS.  No more happy campers, alliances are starting to form, and factions are taking place.

I can already say I like this format a lot better than last season.  Instead of veterans instantly teaming up to dominate the newbies, they’re doing exactly what was expected of them by trying to coach their way to victory.  From what I gather, Janelle, Boogie and Britney all had a busy night trying to figure out what’s going to happen with certain situations, who is playing who, etc.  Dan, well it appears he spent all night making googly eyes at Danielle.

We already have our first injury in the house, as Ashley hurt her back or somewhere in that area and needed some help moving around throughout the night.  This is her this morning after sleeping through some muscle relaxers..

Looks like me after staring at the live feeds for 5 straight hours.

As far as the actual competition, I heard some key things.  It appears the coaches will definitely be having more of a role in the outcome, just as I expected.  Apparently they had some type of coaches competition in which Boogie won. This likely happened before nominations and allowed him to choose one person on his team to be immune from eviction for the week.  It sounds like he chose Ian, which resulted in Frank ending up on the block.

So here is what I know for sure:

Frank and Kara were nominated.  Danielle and Ashley are have-nots.  The PoV competition is likely today and I think JoJo is hosting it.

Anyway, they’re up and about, so I’m going to still try and get my finger on the pulse of the house.  If anything interesting happens I’ll likely be reporting it on twitter or facebook first before writing a story about it, so be sure to follow.  Keep checking back throughout the day as I’ll be posting random updates when I find things out!

Previous The Live Feeds Are UP!
Next Big Brother 14 – Afternoon Ramblings