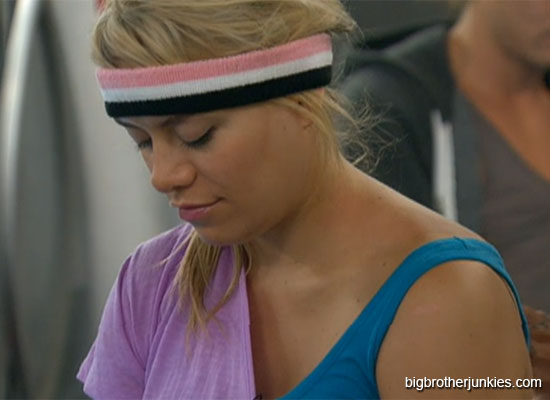 Well, it looks like Shane has decided to fire the bullet directly at Janelle instead of trying to be sneaky and pick one person from each team to try and mask his intentions. I was almost certain that Joe and Frank were going up, but in a surprising move, Shane put up Joe against Ashley.

I’m not really sure about what to think about this move.  It’s very clear the target is going to be Joe, but I don’t think Ashley is taking being a pawn all that well.  She’s looked sad ever since the feeds came back up.  I think the veto will be a huge factor this week, but it was probably the smartest move going forward.  Shane has nobody, and he doesn’t trust Janelle at all.  When the coaches enter the game, I can easily see Shane teaming with Frank and Danielle and running the house.

Check out the live feeds tonight, because Janelle is saying how upset Joe is considering he’s not only a have-not, but he’s also nominated.  A pissed Joe could be an entertaining Joe.

Side note: Janelle and Britney are now talking about potentially coming into the game, and they know they have to get rid of Frank because of that.  It’s interesting to see the thought process now that some of the coaches are really getting convinced they’re going to be playing.  Could be an interesting week!