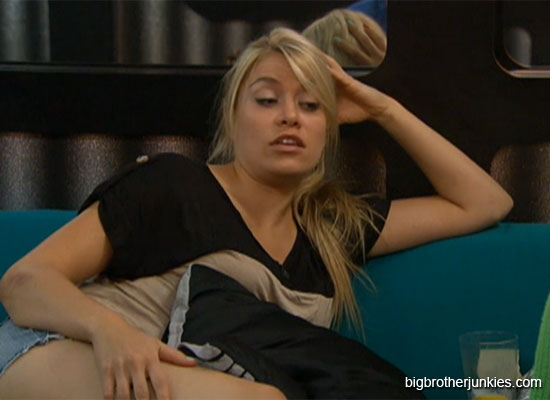 Ashley has been pulled off the block

First let me vent a little…. Right before Big Brother 14 started, I decided to upgrade my website server in order to prevent any issues I had last year during big events.  I am now spending 2x per month I was last year on this site, and so far it’s had three major crashes (btw help with the costs by signing up to the live feeds here).  The worst part, they seem to happen either right before bed or like yesterday, while on vacation.  I was relaxing at the beach, then getting sent through scary dark dirt roads through New Hampshire thanks to my GPS.  Apparently I selected the “Be prepared to be killed” route to get back to my hotel.

During all that, my freakin server goes down and I spend all night waking up every few hours to contact my hosting company to try and get it fixed.   What a crappy ending to a great and much needed vacation.

Nobody really cares though, I know I wouldn’t if I read this post.  Shut up and get to the Big Brother stuff…  I agree…

Yesterday the PoV ceremony was held, and it sounds like things are going to get real this week.  Shane decided to veto his own decision and put Frank up on the block, then gave him the reason “This will help Joe get out”… sure, because Ashley was such a huge threat haha.  I know Frank is a big threat in the game, but Shane secured a pretty strong trust with him by not putting him up. Having those two allied for a few weeks when the vets enter as players would be nice to see so we don’t end up with another season of veterans making newbies look like newbies.

Watching Shane potentially get out what he sees as his strongest rival (but in reality may be his strongest ally) on Thursday is like watching a guy standing on railroad tracks with headphones on as a train marches towards him, all in slow motion.  I feel he’s going to end up making a huge mistake, but I know others may disagree.

Who knows though, Joe still could be walking out that door, but right now it’s not looking that way.

I know other stuff happened in the house in the past few days and I’ll try and blog about that when I finally get home (blogging from a hotel right now), but now that the site is up I had to share this story.