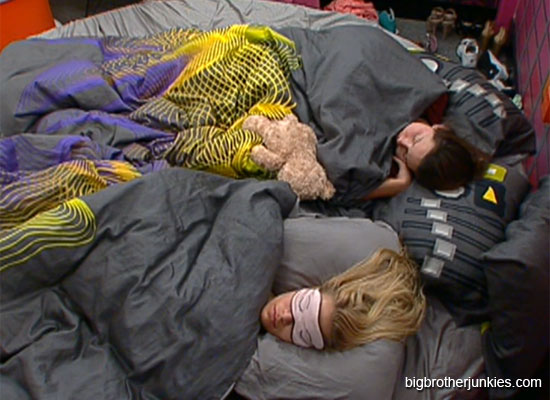 Ashley and Danielle getting their rest in now, while they can

Big Brother 14 – Resting Up Before The Storm

Over the next 48 hours, things in the Big Brother 14 house are going to be quite entertaining.  I don’t mean to be hyperbolic about it, but there is a huge divide in the house right now and the houseguests are on inside lockdown until the live show tomorrow night.  In one corner you have Frank coached by a former BB winner, Mike Boogie and in the other you have the house chef coached by a fierce Janelle.  Votes are easily 2-2 right now with each team voting the other person, with Danielle being the major swing vote.  Over the next 30+ hours on the live feeds, you’re going to see some major action on the live feeds with both teams courting Dani for her vote.

(Don’t have the live feeds yet?  Why not?  August is generally the most entertaining month on the feeds, and at 0.50c a day, the price simply cannot be beaten.  Get 3 days free to try it out first)

In addition to the Danielle courting and flip flopping of her vote, the reason they’re on lockdown is because they’re likely setting up the season’s first endurance competition, and there is a solid chance that the coaches will enter the game to be part of this competition.  It’s going to be one of those challenges that begins on CBS but ends hours later as players give all they can to stand on some ledge or be spun around a pool of butter.  The beautiful part, you can watch the competition all night on the feeds, or check here for updates!

Before we jump ahead of ourselves, let’s talk about the current major issue in the house.. Frank vs Joe.   (after the jump)

Like I mentioned above, Ian and Jenn are easily voting for Joe while Wil and Ashley will be voting Frank (to leave), and the person who will decide their fate is currently infatuated with Shane and would probably vote herself out if he asked her to. This is Shane trying to explain to Danielle that he’s not looking for a relationship and the reason he doesn’t like being touched is because he doesn’t like his body (umm, ok) 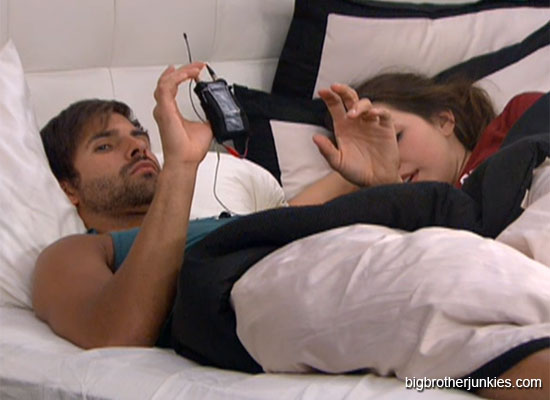 Most people who don’t like their bodies don’t walk around without a shirt on for millions to see.  Heck, I don’t like walking around without a shirt on at a hotel pool, forget in front of cameras for all the live feed watchers.  Danielle doesn’t even see how many times he’s tried to tell her that he doesn’t want to be with her, it’s almost sad.  People have bashed Shane for misleading her in order to get further in the game, but I don’t think that’s the case.  He’s tried to let her down, over and over, but she is just convinced he’s in some shell and will come out of it eventually for her.

To be fair, Danielle is the person who is still carrying on the lie about being a kindergarten teacher opposed to a nurse.  Ian has practically admitted to being the real life version of Spencer Reid and Danielle is worried houseguests will fear her nursing degree?  So the lie she came up with was that she is a teacher instead?  Does she not realize that teachers are pretty smart too, even kindergarten.  Sure, they may not all be geniuses, but neither are nurses.  Danielle is just out there, and I thought Ashley was a spaceshot.

This morning on the feeds (flashback to 9:35am), Boogie was already at work trying to think of angles to work Britney (who controls Shane, who controls Danielle) for the vote tomorrow.  I don’t think it will be that hard at this point, especially with the house almost all convinced the coaches are coming in the game tomorrow night.  Right now Boogie is going to try the intimidation factor where he’s going to trade for Shane at the next coaches competition if Frank goes home (assuming there is one). Another angle they’ll likely work is trying to get Frank and Shane to team up so they can deal with the coaches, and Shane may actually buy that.

The problem with that is Shane completely screwed himself this week by taking Ashley off and putting Frank on.  The reality is that Frank and Boogie were re-building a trust with him, but he threw that out the window and even if they do convince Shane to keep Frank, they’re going to turn on him the second they no longer need him.

In explaining his game to Danielle last night, Shane said he’s not very good at Big Brother, only the competitions… the social part though?  Forget it.  Shane, I agree.  While you’re at least playing the game unlike half the house, you’re making a lot of stupid moves.  If the coaches come into the game, I don’t see Shane lasting 2 votes (assuming he wins HoH one week).