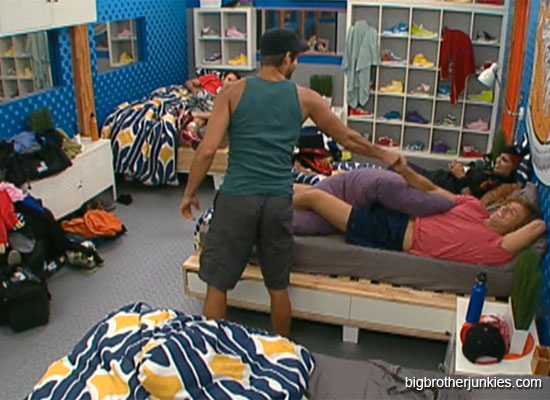 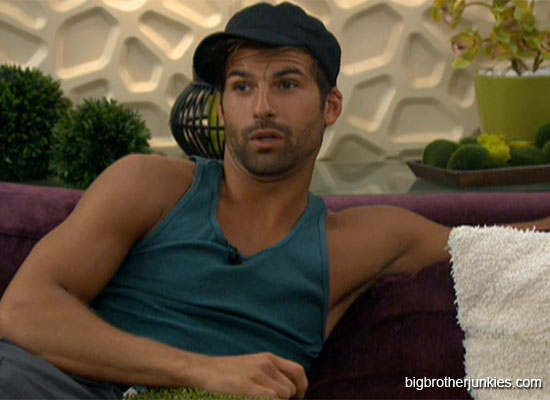 A quick recap of the house so far, Shane won HoH on the live show Thursday night, and then ended up nominating Joe and Ashley.  This was a big shot to Janelle’s team as it’s a clear message that he’s still not too fond of week 1.

Today, the PoV competition was held, and a surprise to nobody, Shane won the veto yet again.  Now he has complete control over who is up on the block this week, and he’s trying to decide if he’s going to remain with Joe, or will he listen to Janelle’s constant pleas to team up against Frank and Boogie.

Right now on the live feeds, Janelle, Wil and Ashley are all hammering Shane to try and get him to use the veto and put Frank up.  I’m not really sure what will happen, but I’m going to keep watching the feeds and updating this thread.

The veto will be held monday, so it will be an interesting few days of the house kissing Shane’s ass, especially after ignoring him last week.

To start?  Janelle offered Shane and Britney her wedding ring as a sign of trust for the next 3 weeks.  Could the tides be turning?  Will those two teams group up again to get Boogies team out?

Still don’t have the live feeds?  You are really missing out.  You get the first 3 days free, and after that it’s just 50 cents a day for the rest of the season which is one of the best entertainment values around today.  About 23 full hours of access to the house each day is an absolutely incredible deal.  To sign up, click on the link below:

More updates after the jump…

5:18pm – Janelle’s team has finally stopped hammering Shane and Britney, and now Shane is running to Frank to let them know he’s still safe. It sounds like there is still some serious resentment from team Britney for Janelle voting out Kara in week 1

5:25pm – It sounds like Janelle’s efforts appear to be wasted.  Shane ran and confirmed it with Frank, and Boogie is now up there with Britney going over it all.

5:45pm – Frank, Boogie, Britney and Shane are up in the HoH room.  It’s amazing how many times the coaches coming in as players come up in conversations.  Either they got wind of it, or they know production has to add a few more players.

It sounds like Ian may have won $3k in the PoV competition.  Not confirmed, but they just mentioned something about it

5:50pm – Janelle is down in the arcade room talking with her team.   She is really starting to get confident that Shane may try to backdoor PoV, so it’s going to be quite interesting when he doesn’t use the veto on Monday.

This conversation is actually kind of sad the longer it goes on.  They’re doing and saying everything they possibly can to convince themselves that Shane wants to work with Janelle’s team.   Both Janelle and Boogie are shady as heck, so Shane is basically picking his poison at this point.

6:20pm – Joe and Wil pulled Britney into the arcade room to basically get on their knees and plead for more weeks in the house.  Joe is admitting he is basically using the show to further his career (I assume to try and hop on a different cooking style reality show), oh and to “play with his kids”(?!?)  So his plan is to beg. plead and promise votes just so he can stay in the house for a few more weeks.  *cough* floater floater *cough*

6:53pm – Danielle and Shane are laying up in the HoH bed talking about stuff, and she asks him what kind of butt he likes in women.  As he explains it to her, she doesn’t really know what to think.. here is her reaction to that: