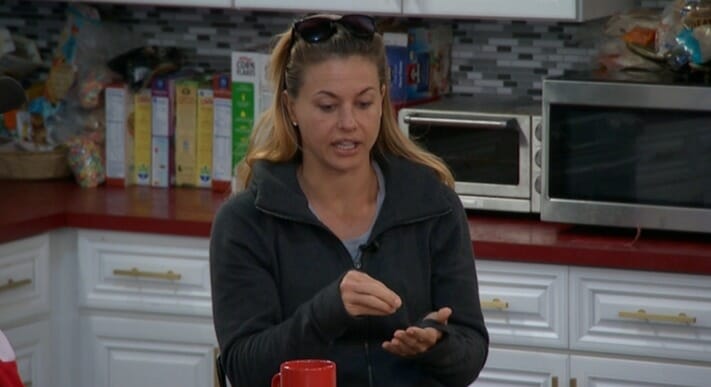 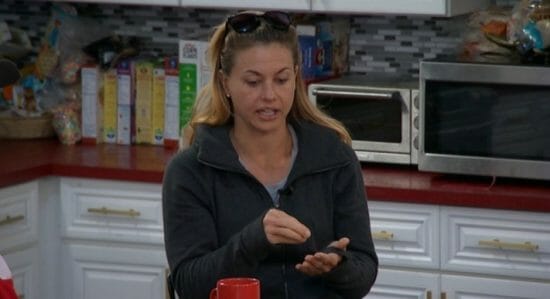 As I was sitting there watching the feeds yesterday, out of nowhere I heard arguing. I couldn’t believe it because it seemed so random, but it was real. Christmas and Mark were going at each other.  Why?  I’ll explain!

Last night, Cody briefly left the HN room to go to the bathroom or whatever it is he does when he leaves.  He stopped by Elena and Mark who were in the apple room and had super small talk about the Temptation Competition that happened earlier. Mark asked if he threw it and why he’d do that, and Cody explained how he didn’t hear some of the sounds because he and Jessica isolated themselves in the HN room for periods of time throughout the week (kind of weird not to play the sounds in the HN room, but different issue).  That was pretty much the extent of their conversation, but Christmas was nearby and overheard this conversation take place.

Cody goes back to his room and Christmas says something to Alex about it and Mark hears her.  He asks her what she was saying about him and she completely lost her shit on him. You can watch the whole thing on the live feeds by flashing back to yesterday around 5:00 pm (note – live feeds are free for a month!).  Back to the argument – Christmas starts lecturing Mark on talking ‘game’ with Cody and Mark sat there with his blank stare completely shocked by what she was saying.  There aren’t very many people who would consider that conversation ‘game talk’ other than the fact they talked about the game they are playing. Most people consider ‘game talk’ as strategizing privately with another person.  Needless to say, this was Mark’s face… 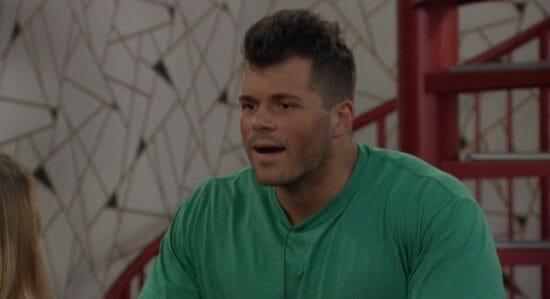 As the argument continued, it got weirder and weirder. At one point Christmas asked Mark about his votes.  She said “let me give you an example… you voting for me the second time” and Mark was stunned and asked, “You think I voted to evict you??” which makes sense based on her tone. Her reply was “No. I know you voted to keep me. I’m asking why you voted to keep me” which was one of the strangest questions I’ve heard on Big Brother since blogging. Mark had no clue how to answer that, and she persisted “think about it for a minute.. think. Give me the right answer because I have a few out there”.  I am re-watching the argument as I write this recap and I still have no clue where she was going with that question.  Maybe she was trying to call him out on flipping on Cody?  That seemed like a strange way to play it, but that’s the best I can come up with. 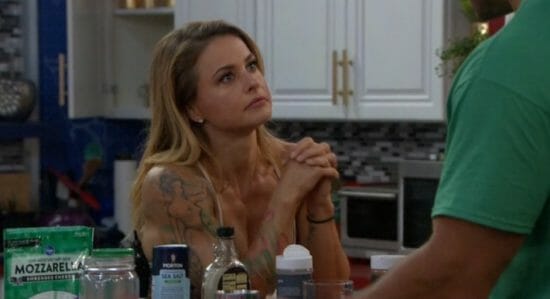 The trademark condescending stare by Christmas

The two go back and forth for a bit and then Josh decides to jump in and start bashing Mark.  He once again goes back to call Mark unreliable or a bad alliance member or whatever the issue he has with him is. Yes, Josh is technically correct that Mark flipped on Cody and has been going back and forth all season, but I don’t understand why it bothers him as much as it did. Matt and Raven did the same thing but he never mentions it. Well, I do know why, it’s to put the next target on Mark which is why this is something you’ll see more of heading into the double eviction or all next week (if Mark survives Thursday night).

After Josh and Mark continue their argument, they decide to try to bring Cody into it for verification. Josh heads into the HN room to pull Cody out who wants nothing to do with any of it. He calmly tells Josh that he just doesn’t give a shit and doesn’t want to talk to him when Josh continues to trash Mark to Cody.  Cody returns and says he has no friends in this house so none of it matters.  Josh then goes on and praises Cody and tells him how much he respects him for being straightforward in the game. Very strange sight to see, but Cody still didn’t care.

Paul enters the room and Josh goes on to praise Cody to Paul before Josh finally realizes nobody in the room really cares what Josh thinks of Cody so he leaves to resume the fight with Christmas and Mark. Paul takes the opportunity to open communication with Cody by asking him a direct question.  He asked if what Cody told him before he was eliminated was true.  Cody didn’t really know what Paul meant so Paul elaborated and said “Did Mark know you were going to backdoor me”. Cody told him that he told Mark but then backed off the statement when Mark wasn’t a fan. Basically he said that Mark didn’t know Cody was going to pull the trigger on it, but Paul seemed to have liked that answer so he stored it in his back pocket for later (stay tuned because this issue will come up again soon on feeds).

The kitchen fight fizzles out and Mark heads for seclusion.  After about 30 minutes, Christmas comes in and asks to speak with him on a calmer level when Mark is calmed down.  At this point I have no idea what the hell I just watched.  It was a crazy fight that was once again everyone shitting on Mark with cringeworthy statements. It’s painfully obvious everyone is just setting him up to be evicted, but I don’t think people can see that. Rather than go all-in with Cody and try to fight back, the entire side of the house is going to get picked off one by one.  That said, watching Matt explain what happened downstairs to Raven later on, it’s clear Christmas did not come out looking very good. She came off just as unhinged as Josh has been this season, so look for her to become a target sooner rather than later.

While I’m on the subject of these people, I do want to point out how Paul went back into the HN room later on in the evening to reach further out to Cody.  This may be because Kevin told Paul that Cody probably wouldn’t vote for him to win, but regardless of the reason, it was good to see someone finally speaking to Cody. It was obviously strategic on Paul’s part to try to earn the jury vote before Cody is gone, but it’s still good to see people offer to talk to Cody rather than let him sulk alone in the HN room for the week. Paul told him this was personal and he can reach out to Paul whenever he wanted to shoot the shit about things. Not game related, just anything so Cody doesn’t go crazy in the room all week.

By Paul doing that appeared to give clearance to his minions to follow suit as this morning I saw Jason and Christmas sitting around the table talking to Cody about Dominique and her eviction (Cody was evicted so he didn’t see any of it unfold).  No matter how you feel, it always sucks when people isolate themselves for the week before they go home.