If you weren’t aware, last year we had two seasons of Big Brother. One was, of course, Big Brother 18, and the other was the online-only version of Big Brother Over the Top. Doing back to back seasons pretty much drained me, but I had a nice long winter to hibernate and it’s time to dust off the blog for another summer of fun with Big Brother 19!

If you’re looking for any insight on the season, I have none. It’s still far too early to know what rules and twists they’re going to have, but I will say I hope they integrate some of the aspects from Big Brother OTT into this season.  Some of the things I hope they carry over:

Again, this is all speculation and suggestions on my part. I have no clue how the format will be this season, but history says it will probably be a lot similar to regular seasons than BBOTT. That doesn’t mean it’s a bad thing as regular seasons are also fantastic, but I’m hoping they just improve on it with what they learned last fall.

Finally, it’s also that time again to start signing up to the live feeds. I really don’t like begging people to do it, but I am certainly going to push heavier during the month of June. Why? CBS is running a contest once again where Big Brother bloggers (such as myself) have the chance to attend a live taping later in the season. Because of you guys, I was able to win during BB17 (Ironically I attended the week Jason from BB17/BBOTT got evicted), so I’m hoping you can pull together to make it happen again!

How can you help?  Click on this link here and sign up to the live feeds. It has to be through the link otherwise I won’t get credit. You know you’re going to sign up for the feeds anyway, so may as well increase the chances that I can once again give you guys a first hand experience at what it’s like to attend a show!  I did a huge write-up of my story during that season, and am ready to do it again this year! 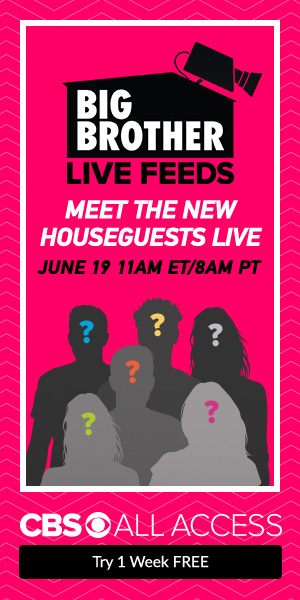 Also, cast reveal is set for June 19th, and will happen on the live feeds first, so it is even more incentive to get them! Either way, stick around because there will be a ton more information on Big Brother 19 as it becomes available.  Let’s hope for a fun summer!