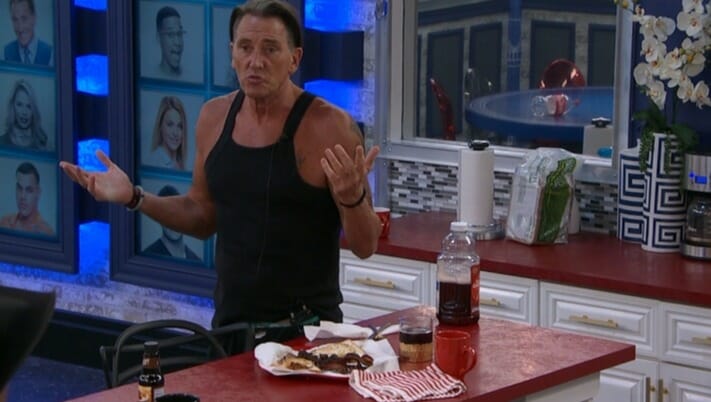 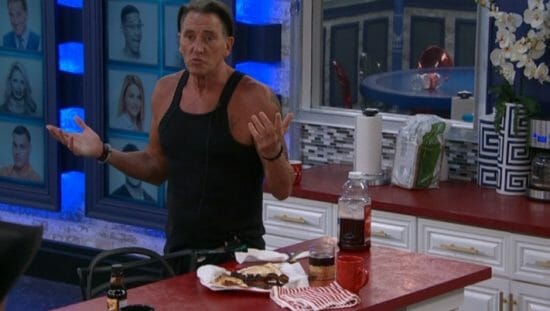 Before I talk about today, I need to rant about last night.  No, not about any game related moves or even the awfulness of the remaining players. I need to talk about production for a second.

I’m going to completely gloss over Alex wanting everyone to go to bed early so Kevin will eat alone when he gets off his have-not punishment at midnight. I’m going to ignore them making fun of Kevin’s tiny eggs and bacon dinner when they’ve gone all out for former houseguests.  I’m also going to skip them eating steak in front of him to intentionally rub it in.  That’s just scumbag behavior I expect from this crowd so it’s just another day in the house.

What I will talk about is production dinging him for taking a bite of his food a minute before midnight! On a week when they let Matt completely humiliate them by only giving him a penalty vote and not even really harassing him every time he broke the rules, they actually gave Kevin shit for eating a minute too soon. A minute. Not an hour, half day, or full day. A minute!  I am in complete shock right now. I get it, they almost certainly hate this cast and nothing would make them happier than to mess with them, but Kevin? And this week?  Kevin stopped eating slop because he found bugs in it. He kept up his punishment without much of a stink despite watching Matt stuff his face all week. He slept on a bed of spikes without complaining.  At this point, if you’re in production, you need to cut the guy some slack. At least a minute’s worth of it.  This is the one guy who isn’t completely embarrassing the show. They should have dropped down a care package that read “Kevin, seeing as you’re the only decent human left in this house, we’re giving you a ‘never-not’ pass for the remainder of the season and we’re going to order you an entire pizza for yourself that cannot be shared in front of the house – who must sit and watch you eat it”.  Is that too much to ask?

Back to day. The veto competition is happening at some point and I’d like to pretend it’s an important one, but with this group of people you never really know. With Jason as the main target of the week, him winning could completely change the outlook moving forward.  The house could continue with their plan to get Alex out which would be absolutely hilarious considering she wanted to go on the block as a pawn next to Kevin, or they can get Kevin out for some reason. Or they could do a third option like a Raven or Paul but that’s extremely doubtful. Alex, Jason, or Kevin will be the one leaving this week no matter what happens in the veto today.