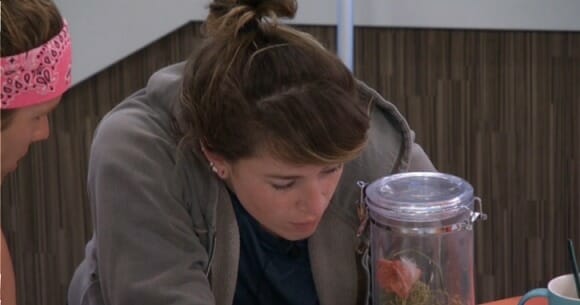 It’s Thursday, so it’s a super slow day in the Big Brother house and there is nothing to write about.  Post over.

Just kidding! This is Big Brother 20 and these people don’t take breaks on Thursday for some reason. While the feeds will be down a lot for production to prepare for the live show, I am still going to watch the feeds and see if anything exciting happens before the feeds go off for good (until the live show).

This afternoon, Tyler decided to randomly tell Sam that he has the other power. I’m not sure his reasoning behind it, but she didn’t seem too thrilled to be the one he told. She really just wants to spend the summer doing crafts and having a summer camp than actually play the game, so information like this may short circuit her brain. He did say that he almost lost his shit when production randomly put the cloud on the TV (last week?) so that was indeed a screwup by production but there wasn’t much thought put into it by the players. Good job, production. Right up there with putting Shelby’s DR session over the speaker during BBOTT.

Meanwhile, Haleigh pulls Tyler into the Jenga room to ‘repair their damage relationship’ but he says it was never damaged (it was).  Haleigh says that Kaitlyn told her several difference alliances he was part of, and how often Tyler talked game with her. She is trying to explain why she nominated Tyler with her hacker app.  Haleigh goes on to question if Tyler had an alliance with Sam (he says no, a friendship), then asks if he has a three-person alliance with Scottie and Sam (he says no and he wouldn’t tell Kaitlyn that if he did). Haleigh mentions ‘the core’ but Tyler says that was never with Sam.  They talk for a bit and Tyler tells Haleigh things like how he said good morning to Bayleigh every morning and he wasn’t trying to be rude. He also wanted to apologize to her if she wasn’t screaming in his face.

Alright, going to update this post later if anything comes up but feeds are currently down!