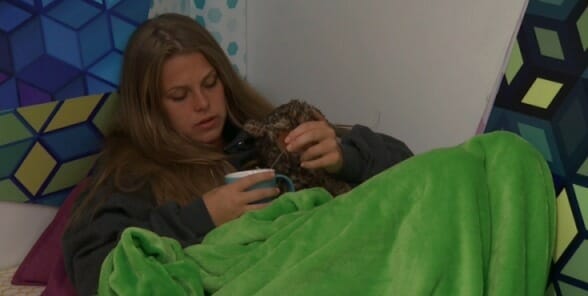 As most of you know, I live outside of Boston, and you probably heard about the shit ton of explosions up here. Well, that happened about a mile from my house and roughly where I grew up, so it’s been a crazy day here but everyone I know seems to be okay and all is good. Things are calming down and I think they found out the problem.

That does mean I didn’t catch any of the feeds this afternoon, but most Thursday afternoons are dead as I’ve said nearly every week this season. People are just preparing for the live show and the only time it even gets remotely crazy is when a last-minute flip happens. They are not flipping and Haleigh will almost certainly be evicted tonight. The big question will be if Brett follows her out the door.

I forgot to say it when I discussed this, but I want to point out that Brett is not making a mistake in strategy, neither is L6 for going after him. Brett’s best plan was exactly what he suggested to Tyler which was let Sam or JC go after Angela and try to get into the f4 with JC, Sam, and Tyler. Kaycee is basically a lock to win against anyone in the house right now so if anyone takes her to the end, they’re dumber than Cody. Gettin Angela and Kaycee out without pissing them off and ruining their jury votes was the right move. The problem was that Brett didn’t have a great read on Tyler and didn’t realize that he was as close to Angela and Kaycee as he is.

Brett probably could have skipped even telling Tyler but he would have had to come up with a good reason for Tyler to throw the HoH to Sam or JC. Let’s be real, the person to win the next HoH will almost certainly be Brett, Tyler, or Angela so getting them to throw it was the key part of the plan. Brett may have offered to win the HoH himself and threw it to Sam had he known Tyler was in love with Angela, but he didn’t. This is a big reason why I suggested Brett work on a plan B a few weeks back. Rockstar was obviously not the right choice for that, but sticking with L6 will earn him 6th place unless he, Sam, or JC win the next HoH.

Now, it’s also not dumb for L6 to eliminate Brett. Now that they know Brett would gun for them, he has to go. That is the obvious move in this situation and there is no other way around it.

45 minutes to go until the show so I’ll stop this now. We’ll see the next HoH, PoV, and eviction play out on TV. I’m unsure if they’ll begin the second HoH live or later on tonight. Either way, I’ll start a new thread to cover the post-eviction feeds.

Going to create a new thread for the HoH