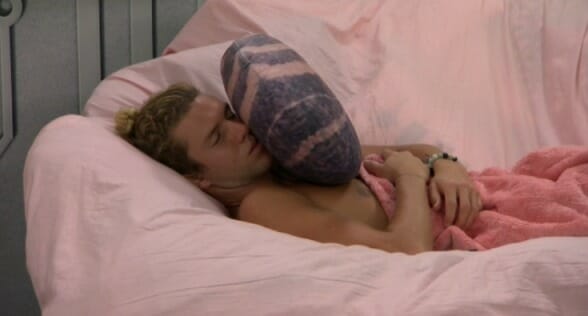 It’s nomination day in the house and we pretty much know who is expected to be on the block. Unlike Fessy, Angela isn’t going to waste her HoH week by nominating her own ally. This means two of Sam, Haleigh, and Fessy should be on the block together come Thursday night. Maybe JC.  It’s hard to say exactly who will begin the week on the block, but early guesses are Fessy and Haleigh. It really is safer that way because if they’re not on the block together, one could win PoV and save the other which causes a situation where people she may not want to be on the block are up there.

They are assuming there is going to be a battle back this week which means they’ll probably play it like that (and they’re right). For me, that would mean getting Fessy or Haleigh out because the entire jury right now is full of their allies so getting someone like Sam out all but guarantees that pair earns a number back (Sam is not winning any battle back comp). That said, it would probably be Scottie who really wants to go after Fessy but I wouldn’t bank on that assumption. If Scottie puts off his retaliation to Fessy even a week or two, that’s three strong players back together again going right after Angela and crew.

Unless of course they pull a Lawon and evict their own ally to compete in the Battle Back comp.  Although that’s something Fessy would suggest and he’s not HoH this week.  Maybe he’ll volunteer?

A random thought – I like how there weren’t many shoutouts last night. I understand the cast wants to get their shoutouts in during prime time and a small one isn’t bad, but it annoys me when they spend half their eviction time giving shoutouts after casting a vote. I think only two people did them last night and they were super quick.  It’s random what bugs me but for some reason, that’s always bothered me.  (that said, it’s always acceptable to shout out a close family member for an event that happens at or around the live show. Birthdays especially).  I know, nobody cares about the eviction unwritten rules, so I’ll shut up.