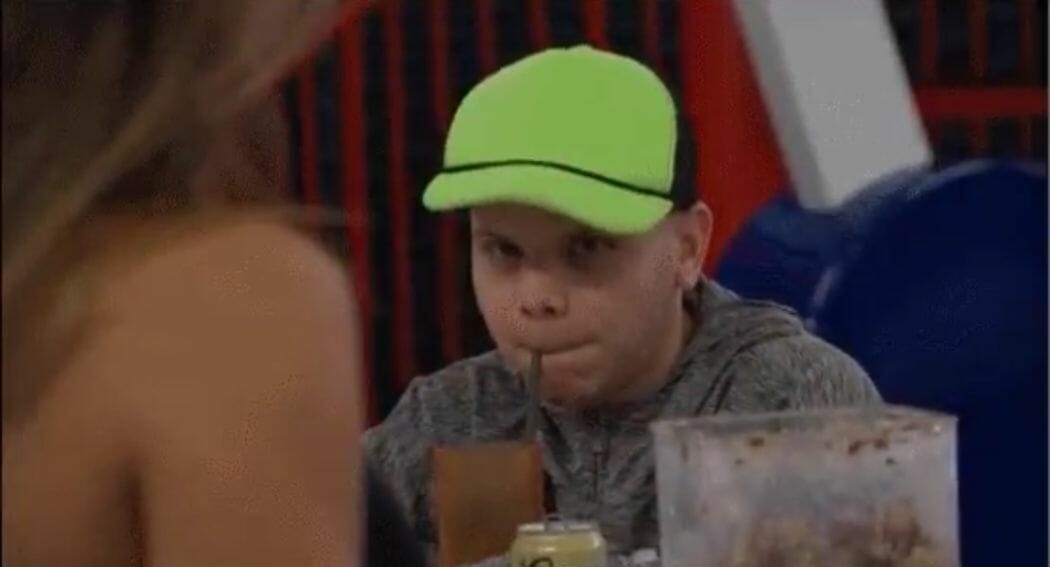 Good morning! I hope everyone enjoyed their Friday. (Doesn’t the image above look like JC is thinking of ways to kill Angela?) We were without feeds for quite a while yesterday. I needed to get things lined out for work so I missed them being blocked, luckily.  It’s rained here for 2 days (a lot) with another day of it to go. We have flood warnings in my area thru the weekend so it motivated me to plan ahead in case I’m stuck at home on Monday. I live on the river so sometimes the road (about 2 miles) from my house gets covered a day or 2 after heavy rain. Unless JC snaps, I don’t see anything urgent I’d need to stay home to watch but at least work can go on without me and I’m prepared if it does.

Yesterday was no surprise with nominations because we knew it would be Sam and Haleigh. KC made the smart move and told them both in advance. I know L6 likes the element of surprise but this is smarter for her game. It sounds like it paid off too because KC remarked on how calm the day was going and how everyone was getting along. Haleigh and Sam even shared a hug afterwards. 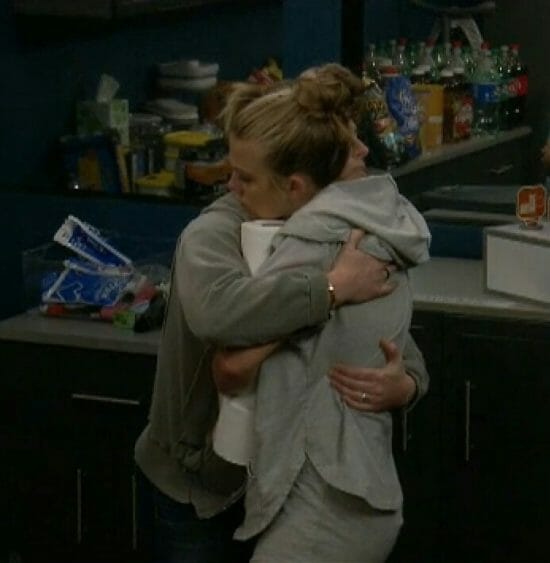 It also sounded like KC messed up her speech or said things that were funny. They talked about people laughing during the ceremony. Later, Sam told Haleigh she was expecting it. She said she’d had it pretty easy and there were only 7 people left. (KC reassured Sam she was the pawn plus she’ll finally get rid of Haleigh so it softens the blow of going otb)

Steve already told you about past hg’s showing up yesterday and that’s why the feeds were down. It sounds like it was Derrick, Paul, Josh, Britney, Dani, Nicole, and Victor.  Victor proposed to Nicole so congrats to them. This came a day after Jeff & Jordan had their 2nd baby. Dani & Dominic recently had a baby too. I don’t want to sound like a killjoy but I cringe a bit everytime something like this happens. It isn’t because I’m not happy for people falling in love and starting families. It’s because production doesn’t need any more help with being shomance driven. Things like this only makes them worse.

If I was really that bad, I’d make a joke about the 3rd time being a charm for Nicole.  I’d mention how the idea for the proposal is lame and unoriginal since Jeff & Jordan already had it covered. I could also be snide and say that even tho it’s where Vic & Nicole met, it’s also where Nicole met and started 2 previous relationships. Ok, maybe I am really that bad. (Don’t worry Steve, if another invite to the show is on the line, tell them I have something on you and it’s the only reason you let me recap for you. Tell them the police are involved now so you’ll have it resolved very soon.)

There wasn’t much activity but here’s what little I do have for you:

They got ANOTHER alcohol delivery and this was after having champagne earlier in the day. What is that? 3, 4, 5 times this week? JC is pissed! He isn’t as bothered by the alcohol as he is by Angela drinking it and increasing the chances (he thinks) she’ll throw herself at Tyler. He’s still mad at production for choosing the have nots based on comp results. He said he was happy to do it when it was his turn but not this way. (If it had been his turn and he’d gotten out of it for the same reason, something tells me he’d think it was a great idea.  He’s also never been “happy to do it” when it was his turn and tried hard to get out of it.) JC may make me laugh but bullshit is bullshit. After telling Brett they needed to keep their mouths shut this week about Angela, he went off to Brett about Angela. He made it around 24 hrs, if that. He wants her out bad! I loved this image of JC staring at the wine bottle while fuming. The top image was during the same time. 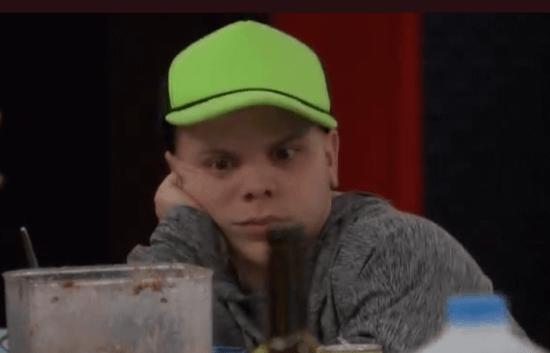 Angela and Tyler haven’t given up snuggling just because they had to give up the hoh room. Angela made a fake body with some hair to fool everyone into thinking she’s in her own bed: 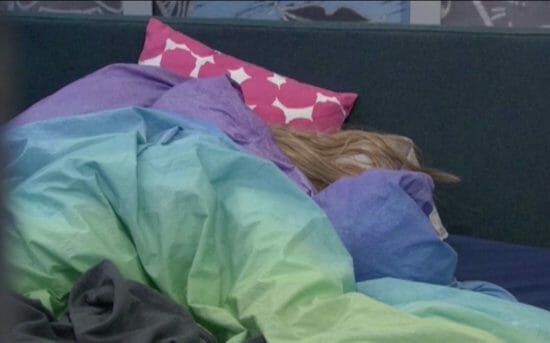 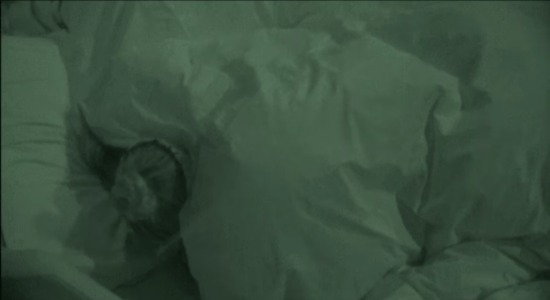 I know there were some Vegas tweets about the Scottie situation. There’s about so been a lot of comparisons to things JC’s done and some people are mad that JC isn’t being punished too. First of all, it’s a twitter leak so we don’t actually know what’s being done to Scottie. It said he’s ended any chance of doing anything in the future with CBS. Let’s be realistic, was Scottie going to do anything in the future anyway? Was he the break out star of the season and now it’s ruined? I’m gonna say no.

Second, the JC and Scottie thing is apples and oranges. Some viewers are missing what the problem actually was with what Scottie did. The problem wasn’t WHAT he said, it was WHEN he said it. They don’t care (mostly) what’s said on the feeds. The FCC won’t fine CBS for things done and said on the feeds. BB has lots of rules but the big ones all refer to behavior during the live show. (Except violence because that’s a big one anytime) He probably got treated coldly after his eviction but they may not even take any stipend away from him. They were able to cut out the things Scottie said in time so I don’t see a risk for a fine. (I don’t blame then for being pissed tho. No one wants close calls like that on a live show)  Even if they were fined, I think the fines can be as much as a quarter of a mil so I doubt his measly stipend would’ve helped much.

If Haleigh doesn’t win the veto, I wonder if she’ll blame Scottie for her eviction. She isn’t big on taking any blame for her own mistakes. (Remember, it’s Rockstars fault that Hay didn’t put Sam otb)  If people in L6 use the “you’ve got 4 guaranteed votes” as the reason to evict her, I think she’ll blame Scottie for blabbing it. I could see her forgetting that she spread the same info thru the house as soon as Scottie told her. She could win the veto and if she does, I won’t know if I’m right or wrong. Either way, I’m very anxious to see how this one ends today but I’m also torn. I think Haleigh’s played terribly so I’m fine with her leaving even if it makes the week predictable. I’m also fine with Sam leaving because she barely acknowledges a game is being played. I think I’m leaning towards wanting Haleigh to win just so JC can finally go otb. (It could be fun and torture for us) It could also give Haleigh a confidence boost and she could start playing better. Stranger things have happened and I don’t mind L6 having a harder road to get to the end. It’s what I’m here for after all. Before any JC haters get excited, I don’t see JC going home even if he has to go up. Things with Tyler could change but unless they drastically change, JC isn’t going anywhere this week. Tyler isn’t going to let that happen.

Have a great Saturday and check back later for Steve’s veto results!