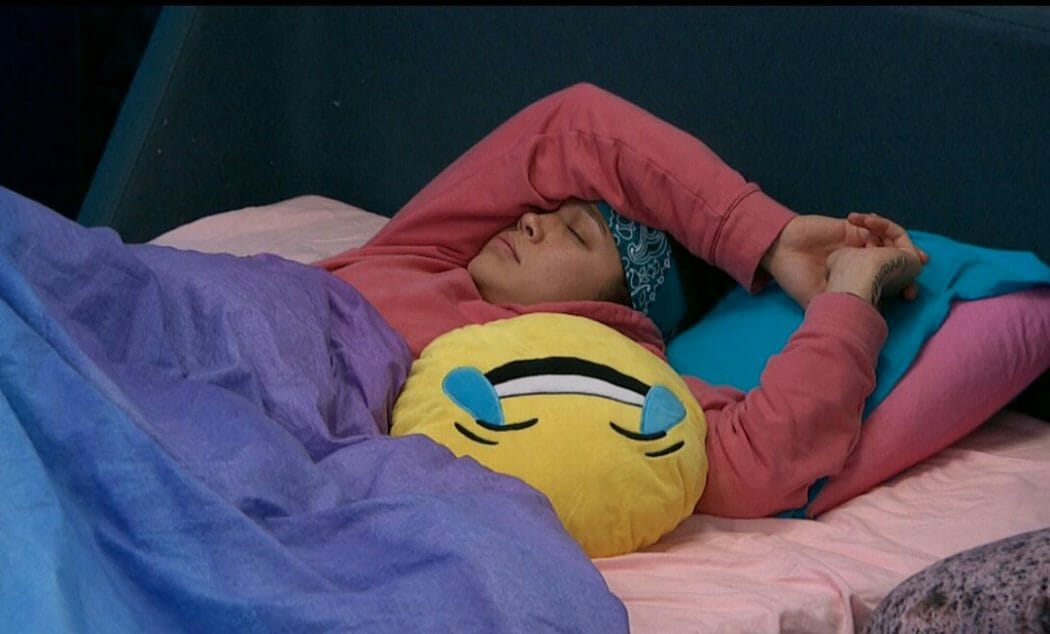 Good morning. There really isn’t anything to recap from yesterday except a few conversations. There probably won’t be with the short amount of time we have left so I think the recap portion of this season is over.  It’s just a waiting game for the final 3 and for us. They will play part 2 of the hoh comp sometime today and we may get a spoiler about who won. I’m sure Steve will post it as soon as we find out.

My pathetic attempt to recap:

KC and Tyler studied whenever JC wasn’t around so he’s trying to get her prepared. KC is still sore from part 1 and she’s hoping there isn’t too much of a physical part to the next one. (It’s usually a combo of physical and game event knowledge) Tyler told KC that JC keeps saying KC will win if she gets to the end. KC told Tyler that JC said he’d take her. They filmed the memory lane episode and continued that conversation once it was over. They were making each other say something nice about all the hg’s. This involved a lot of making fun of each other while it was happening. JC’s favorite thing about Angela was when she didn’t talk. (Lol) They had dinner together, slept and tried to figure out what day the finale is going to be. JC went over AGAIN how he controlled everything and Tyler is having fun with JC at this point. He made sure KC heard it too. He’d already told her JC might win if he got to the end and I think this was Tyler driving the point home. (not that he really has to worry about KC changing her mind) JC also got mad when he found Tyler with the heating pad. You have to remember, that’s an ongoing thing with them. Yep, that’s your recap, sorry! 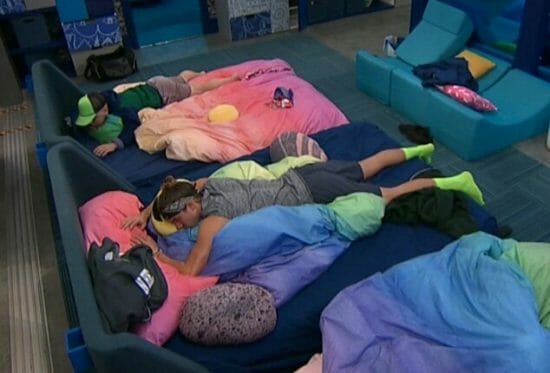 Unless Steve would like or needs me to do something different, I’ll probably take the next few mornings (Sun, Mon, Tues) and go over my thoughts on the individual games of the F3, doing one each morning. I can include any feed recap information that happens from the day before…if there is any. That would leave Wednesday morning for me to cry and whine a bit and tell everyone how much I’m going to miss this season and all of you.

I mentioned the “remember when” episode was filmed yesterday and it sounded like that’s why Jeff was there. (I’m with Steve, it’s a stupid episode) They usually do that alone so I have no idea why they needed Jeff. Production has tried to work in past hg’s more this year since it’s the 20th season, in lieu of another All Star season would be my guess. I’ve said for years, there will never be another all stars imo for three main reasons bit there may be more.

I didn’t mind the past players showing up this year but I do think it was a missed opportunity. (I’m sick of seeing Rachel so again, I agree with Steve)  Several past players hosted comps and several comps included funny things about past players. (movie posters, dating game, etc.) I’ve liked seeing those and they even managed to work in an alumni marriage proposal so they tried at least. I wish they’d done more of it but made it more obvious. Instead of the theme being technology with email, buffering and emojis, why not actually have some version of “remembering the ones who came before you” be the actual theme and do it big? It would’ve felt so much more intentional. I liked the play on words with some of the comps, like using Goober instead of Uber, although I’ve heard the smart and cool people use Lyft. It’s a tradition (accidental or not) for production to start with a theme and lose their way through the season so that too, is just a part of BB. We’ve come to expect it and we get a laugh out of it. Remember the BB Takeover year? We were told that every week someone would “takeover the game” that season. There were a couple guest appearances and then it quietly went away. They never announced it had stopped, just crickets. There are more examples but I can’t think of them at the moment because truthfully, I wasn’t planning on writing about this today. As usual, I started typing and my brain went a different direction from my original thought. (If you read my recaps, you’ve suffered through this before and shouldn’t be surprised) This season has its own examples anyway. We just saw a veto comp of them running through a maze with a medieval theme. Could they get any further away from technology? Even the technology they chose was sooooo BB and cheesy. I mean, emojis and email are on the cutting edge of what’s new, right?

This is the image with the caption about the leak on feeds: 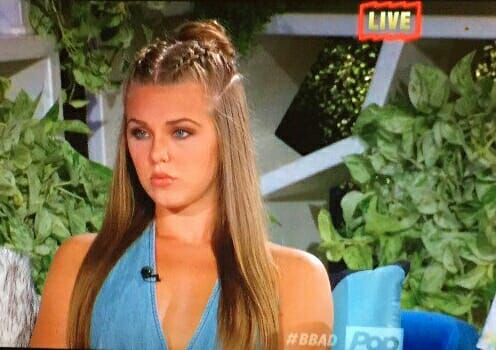 The jury discussion was filmed yesterday and I read about a leak on the feeds. I didn’t see it so don’t know the details. There’s another one Steve can add to his list of production oops moments if it’s true. I saw a picture of Haleigh so maybe the leak wasn’t audio. I hope Dr. Will spent some time learning what was going on before he guided them through the conversation. People want to believe he’s an avid feed watcher because he’s one of the best, if not the best player ever. (Dan vs Will is going to be debated forever) Well, sorry folks, he isn’t a feed watcher acording to things he’s said. He also wears an ear mic during the discussion to guide him through it. He’ll still call them out when they’re being whiny and taking things personally so he does a really good job and I thinks he’s a great choice. Someone who’s glued to the feeds would probably have a favorite and I’d rather have someone neutral. (I don’t think Will gives a shit who wins, his legacy is secure regardless)

Speaking of the jury, I want to bring up the “bitter vs no such thing as bitter” debate. We’ve adopted the word “bitter” to describe several things and maybe that’s why it’s turned into such a debate. I would agree that if you can’t get rid of people while making them feel somewhat good about you, it’s on you and you have to blame yourself. The jury is “bitter” because you made them feel like crap. In that way, it’s justified for a juror to vote against you. Even if it’s an emotional game reason, it’s still a game reason. That isn’t really being bitter, that’s being hurt over how someone in the F2 treated you as a person in the game. It’s poor jury management and instead of “bitter,” that juror is an emotional game player who is guided by the personal part of the game. That’s completely reasonable because people aren’t robots.

However, when I say “bitter,” I’m talking about something else and so are many other people. Everything can’t be personal in the game because no one wants to be evicted. What I think is unacceptable is being petty and selfish.  We’re not stupid as viewers and we aren’t blind either. We can see the difference when someone was unnecessarily wronged in the game vs someone who simply doesn’t like another person. I’ll use Rockstar and Angela as an example. Those two have nothing in common and never connected. An argument can be made that it was Angela’s job (if she’d been in the F2) to find a way to connect with Rockstar, find some way to relate to each other. That’s the social aspect of the game. Even if she wasn’t successful, Angela’s goodbye msg could’ve been something like “I know we didn’t connect or get to know each other very well but I admire you as a mother, being here fighting so hard to bring this home for your kids, blah, blah, blah.”  If it didn’t work and Rockstar voted against her, it was personal and that’s ok. If it didn’t work and Rockstar voted against her because she drove a Range Rover and was “rich white privilege,” that’s just petty. That’s what many of us mean when we say “bitter.” It’s being petty without a justifiable game reason, emotional or strategic. In the end, it’s their vote and not mine so they can vote and justify it however they want, it’s their choice. What I think of how people play and vote are my opinions and those belong to me. I can respect it or not, that’s my choice and I don’t respect petty voting. Bitter yes, petty no.