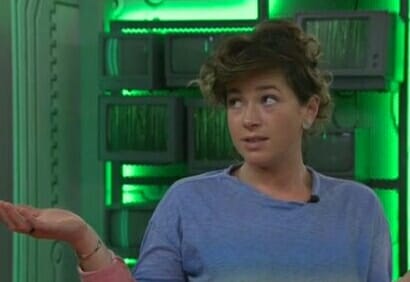 Good morning, I wish I could say “holy crap, you won’t believe what you missed last night” but I can’t. How about “wow, Sam hasn’t destroyed the house with her lead pipe and the house is peaceful?” That’s the best I can offer this morning but hey, it’s something good at least.

We complain about how bored we are near the end but the hg’s have it so much worse. They’re bored out of their minds and can’t even go outside so they’ve entertained themselves the best they can. This is where Angela and Tyler are lucky. When you’re in love, you can be content doing nothing, talking about your childhood, your friends, etc. so they definitely have it better than the other three. These two are happy just laying around looking at each other.

Swaggy’s tweets crack me up because he’s so delusional and he overvalues the role he played in the game. A recent one said he was happy for Angela and Tyler if they were really in love but they couldn’t be if Tyler would cut her in the game. He said he’d never have done that to Bayleigh. (No, he’d just describe their sex in way too much detail to Fessy and people watching feeds. That’s sooooo much better than flowers, right?)  See, this is the kind of thinking that made Swaggy a bad game player. I don’t know if Tyler cuts her or not but if they’re mature, it doesn’t have to matter. Here’s a tweet about Brett. It’s his response to someone saying Brett had the biggest blindside so far: 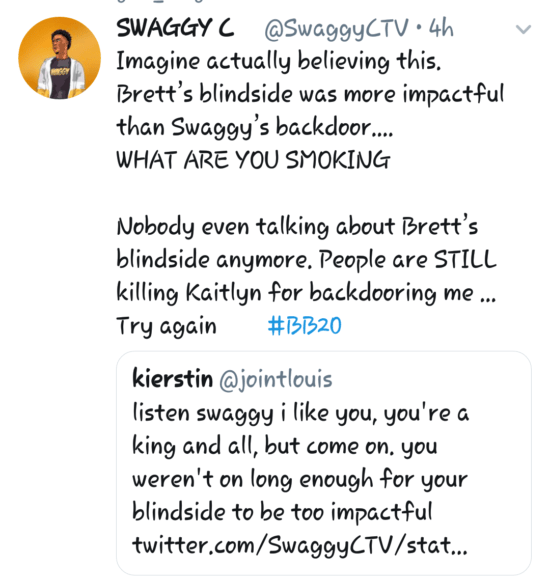 If you listen to Brett, Angela hasn’t done anything all season anyway. The interviews they do after they’re evicted vary as the day goes on. I read the most recent one yesterday. When you read these, you can almost see people slowly snapping out of the fog of the game. Sometimes they’ll give conflicting answers in different interviews but it’s because they’re still confused. Everything they say can change once they get to the jury house anyway so I don’t put too much stock in them but they can give us a little insight. Take someone like Rockstar for example. If she says in interviews how bitter she is, I’m more inclined to think it will stay that way because that seemed like her nature while playing the game. Brett wasn’t very impressed with Angela in any of his interviews so that makes me think, he may continue to think like that. He also seemed to have a bit of a chauvinistic attitude in the house and I wouldn’t be shocked if he’s someone who doesn’t give a woman enough credit in the end. If Angela gets there, he may think her boobs got her there.

Brett said “Angela didn’t play the game.” He said she’s pretty and that’s why she got so far. (She’d won 2 hoh’s and 2 veto’s to his 1 veto before he left so…shove it Brett) He contradicts himself because he also said she controls Tyler 100%.  He said he’d be fine with seeing KC at the end but he thinks Sam and JC are playing the best and are hoping it’s them. (This is the bitter part because Brett NEVER thought Sam was playing before) Even someone in L6 is acknowledging that L6 better take each other to the end. They could all lose to Sam or JC.

Yesterday was slow and almost all of the recap is random conversations the hg’s had with each other:

It was reported from several sources yesterday that Julie will be leaving The Talk, effective immediately. There’s supposed to be a video msg from her played or something. Basically, she’ll be giving a statement explaining that she’s leaving without putting herself in a position to have to discuss it. (Smart)  The reports also said she’ll continue with Big Brother. It didn’t say if she’ll continue beyond this season though.

No one can really be surprised by this announcement.The Talk is a different kind of show from BB. There’s no way she can be on there discussing the things they regularly discuss while her husband has the same type of allegations made against him. It would never work and it was never going to work after this happened. It isn’t about fairness or people thinking she’s innocent and shouldn’t be punished too. The entire structure of the show makes it impossible for her to continue, fair or not. Who says she even wanted to stay? We don’t know how she feels and she may be dying for Big Brother to end so she can get the hell off that stage too.  She is a professional and could only be finishing out this year.

It’s easy for people to say she should leave her husband and save her career but it’s more complicated than that. I believe the allegations for the most part because I don’t know what the people making them gain by making them up. I wasn’t there and don’t know what happened so that’s all I have to go on. It’s true, there’s been a power struggle for control of CBS for a while and it’s possible this was used as a way to get Les Moonves to step down.  However, I don’t know why these women would say these things just to help someone else get rid of him. That’s my opinion and it’s a fairly easy one for me to have. Who can expect Julie to share that opinion just because someone makes an allegation? Maybe she knew he was like this but thinks he changed when they got married. Maybe she doesn’t believe it at all. Who knows? I do know that I’ve been married to my husband for about the same amount of time as they’ve been married. If someone I don’t know or barely know said my husband did something like that, would I automatically start packing his shit and tossing him out of the house? If someone made an allegation against your spouse, would you just take the word of a stranger over your spouse? That’s why I say it’s complicated. If she believes him over other people, well, that’s what married people might do. Now, if a dozen people said that about my husband, I certainly wouldn’t dismiss it and you can bet your ass I’d get to the bottom of it. Forget packing his stuff, I’d probably burn it in the front yard and kick him out. I’m also not in the public eye and would have the ability to sort it out without people watching me do it. I’m only saying I don’t know how she should handle it and I’d imagine she’s handling the best she can. If these allegations are true and if she leaves her employment at CBS,  (no matter which side makes the decision) CBS didn’t cost her the jobs, her husband did.

If and when BB is renewed, she may continue (but I doubt it) if it works for both sides involved. She may want to leave the network that got rid of her husband and they may want her to leave and go a different direction entirely. It could be either, both or neither. I hope she stays if she wants  to but I’d also understand if CBS wants to put someone in there who isn’t married to the person who just left. That’s just business and we don’t know Julie personally. Is she someone who everyone loves and can easily separate the situation from her job? Is she someone who’s known for being so raging b*tch when she’s pissed and would be hard to deal with moving forward? I don’t know.  Selfishly, I’m more concerned about the show being renewed than I am who hosts the show.