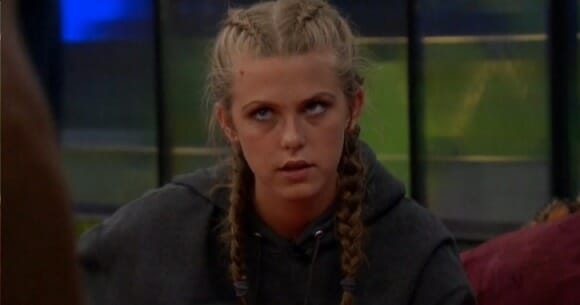 Good morning! Yesterday may have set some records but I can’t be sure because I didn’t have time to do the research. Hg’s have said things will make “BB history” a lot this season but I may have witnessed the worst pitch in BB history last night. We may have seen the longest bath and from the way hg’s are describing the veto comp, it may be the hardest time they’ve ever had getting the OTEV answers correct.

The day started with an argument not shown on the feeds so maybe we’ll see footage on the episode. I’m just going to call Foutte/Hive “Five” from now on. I’m tired of typing both, they think they have a solid 5 people and it was always a stupid name. Five is convinced KC has the hacker power & 2 nights ago, KC told Angela she was going to go off (partly faking) if people kept accusing her. (Knowing this sets the stage for the argument)  We’ll have to see the clip to know what version is the truth but RS and KC had words with each other and it went something like this:

RS approached KC and said there were 6 other people to pick from for the hacker to nom but she was chosen because she’s an easy target. KC said she wasn’t the hacker and was going to go off if people kept saying she was. KC said this was the first time RS had ever spoken to her. Some cuss words were being used because RS said something about not cussing. KC said she was a grown ass woman and would cuss if she wanted.  (The retells are more exaggerated so this is all I have, we’ll have to wait and see) RS tells people later about it and says “I’m a grown ass woman too.” I don’t think she said that to KC, I think that’s the retell version but not sure. Both sides began to get pumped for the veto comp in separate sides of the house. There was a playoffs sort of vibe going on. The wait for the comp was forever, Tyler won it and here’s what followed:

The Pitch: I want to point out a lot of time and planning went into this pitch before it happened which makes it even more hilarious. Hay was cocky and saying that Angela couldn’t offer Tyler what she could offer.  The hohitis was at a high level as Hay drank more wine to relax and prepare herself. Hay stayed in the tub for the talk. She and RS were together at first and later Tyler spoke with Hay alone. Tyler just listened but didn’t commit to anything. Here’s s summary of what they either offered him or gave away to him:

Hay is convinced she has the only alliance in the house and even said “no one talks game like we do.” We’re laughing because we know about L6 and she doesn’t. That doesn’t give her a pass on the info she spilled.  The pitch is so much worse coming from someone with her limited knowledge of what’s going on. Tyler knew most of what they told him but they don’t know that. Hay doesn’t need to know Tyler is in an alliance with Angela to remember that Hay just tried to backdoor him and Angela just used a veto on him. (A veto he could have taken but let Angela keep- why would Tyler have taken such a gamble? Come on people!)  Based on what Hay and RS think, this is what they would have given up if Tyler didn’t already know it: Brett is working with Hay when Tyler thought he was alone, Scottie is loyal to Hay and tells Tyler’s secrets, they want Angela and KC both out, they have Sam on their side now, Fes was never going to do the guys thing he proposed to Tyler because he’s with Hay and RS and JC’s probably with them because of Hay’s weird math.

Here’s what happened after the amazing pitch that only professional speechmakers from Heaven could’ve accomplished:

A hangover could take Haleigh’s hohitis down a notch today but we’ll have to wait and see. Watch for Tyler to push JC a bit more than usual and Fes to follow Hay around even more than usual since he got to make out with her last night. I’d also expect RS to be making crafts with Sam or at least sharing cigarettes. Let’s see if Five will work on Sam and JC (which is what they need to be focused on, not Tyler) or if Hay just keeps flirting with Tyler.