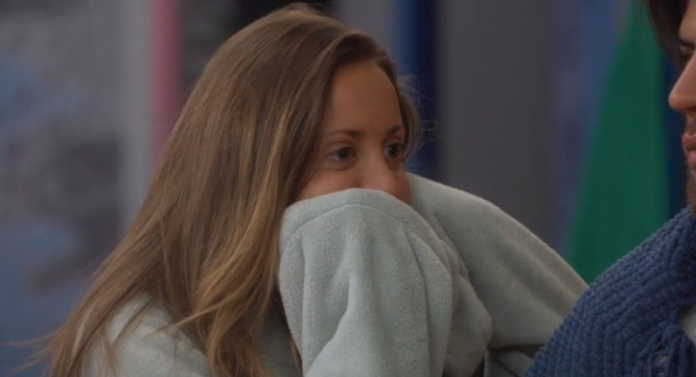 Good afternoon, everyone! It’s Sunday and a day before the big house split!  Let’s get some Big Brother Spoilers going on…

Both sides currently expect Tyler to use the veto (he will) and Kaitlyn replace Scottie with someone from the other side. Unless something gets leaked today, that means tomorrow could be a pretty fun afternoon on the feeds! (get the live feeds here – and a week free!)

Havenots were finally picked today and Kaitlyn had a large pool of people to choose from as many volunteered for her. She ended up going with two guys and two girls which caused some issues in the house because apparently Tyler raised his hand but she told him no. She claims it was because she already had two guys picked, but definitely not a good look considering how close the two have gotten.

The backyard is finally open today, so expect a lot of tanning and relaxing in preparation for tomorrow.  Here are your spoilers…

Hey guys, I’m gonna update for Steve for a bit.

2:15 pm – Bayleigh asks Fessy if Kaitlyn is going to have veto used and put up Angela. Fessy says she is. She asks if he’s sure and he says he thinks so. She wants to know if Fessy thinks Kaitlyn would put one of them up and he says that he really doesn’t think so. Bayleigh said that Kaitlyn hasn’t told her anything about what she’s planning. Fessy asks if Bayleigh has asked her and she says no. He points out that if Bayleigh asks, Kaitlyn will probably tell her. (Yep, this sums up Bayleigh and Swaggy’s game play since Thursday)

BB voice keeps asking JC to move the exercise equipment back to its original position. They’ve asked more than once and say “you may begin now.”

Unless something big happens, that’s probably it for me until the show airs. That gives me 40 minutes to do a couple of other things. I actually need to call my mom. See ya soon…

ABOUT US
FOLLOW US
©
wpDiscuz
53
0
Would love your thoughts, please comment.x
()
x
| Reply