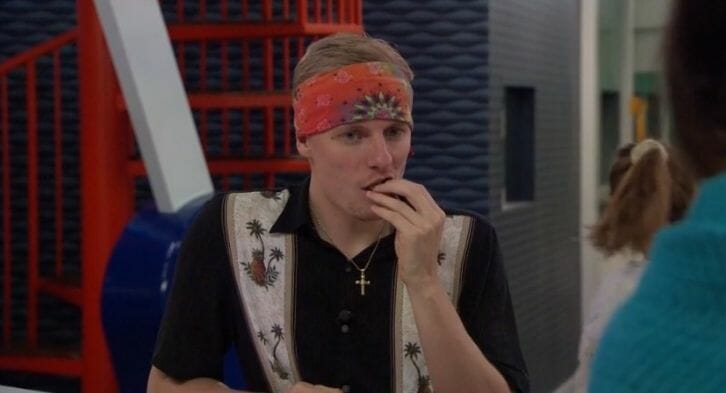 Last night was really enjoyable to watch and it’s been a long time since I’ve enjoyed a season this much! With only 2 evictions, we’ve had 2 blindsides, a split house, game talk, people looking out for themselves and rid ourselves of a shomance. I don’t think I’ve mentioned it before but it’s great they’re showing episodes from previous seasons when the feeds are down. It’s also causing people who’ve only seen “modern BB” to go back and watch the old seasons which is also great.

I’ll pick up where Steve left off last night but first…  (sorry, hadn’t done that yet this year) I wanted to mention some stuff from the episode and other random things.

For all you Kevin Schlehuber fans, I listened to a podcast he was on last night and he was funny! He was giving his opinions about the season and telling a few tidbits from last season. Y’all know how much I like a tidbit. He told a story about his method of having someone hide cookies in the fridge so he could get them later (when he was a have not) and how he kept flushing the toilet so he could eat them in the bathroom. Josh once called him out for not washing his hands but Kevin said it was because he had cookies fisted in them. He said they used to hide them down in the grooves between the spikes on the spiked have not beds. The biggest obstacle was letting them dissolve in your mouth because you couldn’t chew, too much noise. For those who didn’t keep up after the season, Jason, Josh and Ramses attended Thanksgiving at his house. He said Paul was planning on going but relative wasas sick. (Sure Jan) He’s a fan of Kaycee and Sam which doesn’t surprise me because he thinks they’re nice. He’s not a fan of the Bros and he doesn’t understand how someone 24 has lived enough life to coach anyone else’s life. Check in later with Steve for updates from today.