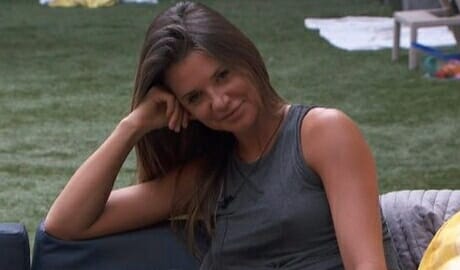 Good morning! We survived an extremely slow week in the house but it’s over and hopefully things pick up with a new hoh. Nominations will be today and plans for them were discussed last night. Before I get into the overnight recap, I wanted to mention a few things from the live episode.

We saw the start of the hoh comp before the show ended and it was the comp many of us thought it would be. The balls didn’t fall from the sky this time but it was the same comp. All I thought of when I saw the set up was the clown shoe and Jeff from his comp years ago.  REALvegas4sure, the twitter leaker, sent out a tweet at the end of the show saying it would be aired on the feeds. People started complaining because the feeds didn’t come on for a long time. I was surprised by how many people were saying they were canceling the feeds because they didn’t get to see it. Sure, it was disappointing but it isn’t as if CBS announced it was going to be shown and then didn’t show it. We were told it would be shown by a Twitter leak. I think because this person has been right many times, people have started seeing it as an official source of information.

According to the leak, they were going to show it to make up for the short length of last week’s HOH comp. They ran into difficulties with the comp setup and because of that, they would have blocked the feeds anyway once the comp started so I say easy come, easy go. Maybe the disappointment is easy for me and anyone else who watches BB Canada. Their feeds go down for 12 hours at a time. Granted, the feeds are free so I guess you get what you pay for. Oftentimes, they block the feeds for hours right after a comp or a ceremony (when there’s the most fighting and drama) because they want to save it for the show. (This isn’t related to anything but Canada also tapes the Thursday “live show” a few hours before it’s aired which I find very odd) Canada’s BB is AMAZING so it’s worth the trouble imo for anyone interested in checking it out.

Last night, we also learned the start of the comp we saw on TV was only done for TV.  They gave more detailed instructions and restarted the comp after the show ended. They had to pause the comp 2 or 3 times because something kept breaking and had to be repaired. We think it was the lollipops that were supposed to move back and forth as an obstacle for the rolling balls. In the end, Angela was the new HOH. We went a long time without a repeat hoh winner. It’s actually tied with BB6 at 8 weeks and that’s a fitting season to be tied with. The team mentality is comparable to that season too and the move Fessy made this week is similar to what Howie did during his hoh in BB6 when he was also tricked into putting up allies.

The really good stuff will happen later today but here’s what happened last night after the feeds came back:

Angela will be going back on a recent deal she made with Fessy and Haleigh but she has to get out one of them. We know there’s a battle back now and the hg’s were talking about it too. A Foutte person will be coming back so if they get one out this week, there will still only be two of them in the house after the battle back. Yes, Sam will probably nom Angela if she wins an hoh but so will Fessy and Haleigh so she needs to strike first. I think Angela already knows this and just needed a pep talk to get her geared up to do it today. It’s what I expect to happen but check back for Steve’s update later to find out for sure. Have a great Friday!