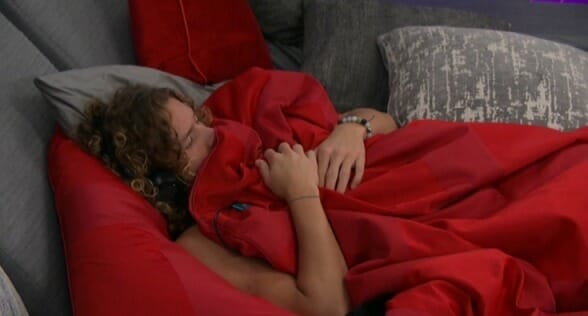 It’s Tuesday in the Big Brother house and last I checked, there were no Twitter controversies today!  Yup, just looked and we’re still clear!

The big story is finally in the game itself and that is the potential flip by Brett. The key word is potential because Brett is a phenomenal liar who is also aware of his surroundings. It’s really hard to get a read on what he is thinking, but the things he is saying to JC could be a concern.  Tyler and Angela have been getting closer and closer while failing to keep it a secret, and Angela/Kaycee have been super close all game. When you’re down to 7 people (as of Thursday) and 3 people are incredibly tight, that is almost half the house working together.

If your dream is to see L6 in the final 4 together, well you still have something to cling on to. Brett may realize that 3 people are close, but he also knows he’s the 4th one in that group which is something JC doesn’t know. Brett is in a fairly good position right now so it’s really up to him to decide which path to take, and he has plenty of time to make that choice. I think he’d be safe regardless who wins HoH next so this will allow him to see which side of the house is going to get more power down the stretch and just go with them. Let’s say Sam wins HoH (don’t laugh), and she knocks out Angela, Brett could skirt the middle even longer.  If L6 win HoH, he is already on their side and just has to accept that his final 3 spot is just going to be a little tougher.

The only thing the JC side of the house has to offer right now is that they are incredibly beatable in competitions compared to L6. Angela, Kaycee, and Tyler have a ton of wins between the three of them, and if Brett is sitting in the final 4 with them, he’s going to need to pull out some miracles because he’s likely the first person to leave out of that group. If he’s sitting in the final 4 with say Sam, JC, and Haleigh, his odds of earning a spot in the final 3 and then final 2 increase drastically.

Brett could be a major player in how this season ends up, so stick a pin in him to watch the rest of the way.