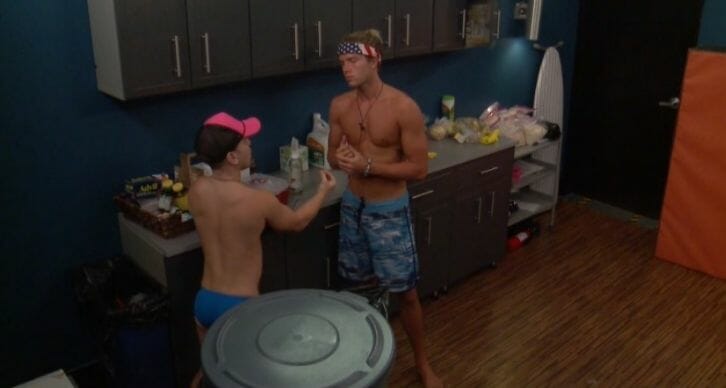 Good morning everyone! Yesterday, I said I hoped we’d get a couple days of Tyler versus JC and that’s exactly what we’ve gotten. It’s looking more likely that Rockstar will be evicted but I still think anything could happen at this point. It’s amazing when the votes aren’t set during a week that may not even matter!  Most of the night was the same conversations over and over. Level 6 still wants Rockstar out and the remains of Foutte wants her to stay. I’ll go over a few things that stood out for me and some random information I forgot to mention already.

Some of us are getting tired of hearing them talk about a battle back and Swaggys potential return but we have to remember, many viewers were making the same speculations before Julie gave us more information. They don’t have that information plus they’re living with all the paranoia we don’t have to deal with. For the record, I never thought Sam’s power meant a battle back for one simple reason. What was special about her app if it was going to be given to all the people who were evicted? A battle back would mean all of them had a chance to return. They’re also having to go on Sam’s explanation and let’s face it, she doesn’t make a lot of sense when she talks about it.  I’m only mentioning this because for some of the hgs, it’s being factored into their decision this week. Bayleigh would love to get rid of Kaitlyn but getting in with Rachel & Angela isn’t the only reason she may evict RS. If one of the first 4 is coming back, she’d rather Swaggy compete against RS than Kaitlyn. (She’s said she didn’t want him to mess up her game if he returned and maybe it was better if he didn’t come back)

Steve mentioned the bedroom action between Kaitlyn from the night before.  There are varying opinions about what happened. It looked to me like he was half asleep and she was attempting to give him a hand so to speak and he didn’t seem to be responding. I know she said to him in the kitchen later in the day that she guessed he didn’t want to sleep with her again because of “last night’s festivities.” She also started her day by talking about her money problems. She was saying how she was broke and sometimes had to choose between gas and food. Luckily this didn’t continue (at least that I heard) but she also had bigger things to address later in the day.

Hayleigh finally told Kaitlyn the rumor going around about her not having a bf. She spoke to Fessy about it and was hurt and offended. She said she’s affectionate, knows her BF and his family are watching and she isn’t doing anything wrong. She’s telling this to the guy she told she’d like to f**k and in those words. He doesn’t believe her and he’s still irritated she lied to Tyler by saying Fessy admitted he loved her when he knows it was the other way around. (half this cast needs to be chosen for the Bold & Beautiful this year, they’re naturals!)

Bayleigh went around telling people Fessy was mean to her. He told her to stop talking about him and he was very curt with her when he said it. Her retell has him cussing at her and being more hateful than he actually was with her. I don’t care when they exaggerate things to help their game but I don’t get what she’s doing. She has a tendency to exaggerate things all the time and she always seems to be the victim (Not Kaitlyn level) but I don’t know what she’s trying to accomplish. It was enough for her to tell Kaycee she doesn’t trust Fessy and leave it at that to help her game. It was also a dumb move to tell Fessy about her app. We’ll have to wait and see if this is a strategy or if she just likes to complain. I’ve been liking her game but she’s spreading out too much imo. Kaycee guessed to Bay that Bay had a power app, Bay denied it but not very convincingly. Kaycee is using Bay for information which she shares with L6 but not all of it.  When Kaycee, Rachel and Angela were going over who might have the apps, Kaycee kept quiet about thinking Bay had one. (Smart to hold something back for your own game)

Bay had some game talk with Tyler. I’ve been wanting them to work together but it’s too soon to tell if they will or if they’re feeding each other a line of crap.

Hayleigh talked to Brett and really swayed him about the vote and I didn’t see that coming. L6 talked him back out of it but he was on board with getting Kaitlyn out for a while last night. Most of the night was people starting to change their minds and someone else talking them back to the other side. For example, Kaycee has done a good job of reeling Bay back when she starts to think about switching.

The best conversations all day were between JC and Tyler. Neither one will give an inch and it’s been fun to watch. Tyler finally got so tired of JC accusing him of being played by Kaitlyn that he told JC he didn’t have feelings for that “dumb ass girl” and he got her to turn on Swaggy. Most of Tyler’s reaction was from JC’s pushing but he may have needed to release a little frustration too. He had to be ready to snap after coddling and cuddling Kaitlyn for 3 weeks. JC truly thinks Tyler’s been brainwashed by Kaitlyn and it’s funny watching him try to bring Tyler back to reality. The only thing it was lacking was a dramatic movie slap they give someone when they’re being hysterical. (They can’t do that so we weren’t going to get that) JC may be a little frustrated too because he didn’t think Tyler was a “brainer” who would make his own decision. JC could be in trouble soon because of how hard he’s pushed this week.

Fessy tossed JC high in the air and flipped him in the pool yesterday. It didn’t go over well with some of the hg’s. JC was on a float and Rachel shoved him into Fessy right before it happened . I heard Brett saying later that Rachel caused the whole thing. Rachel’s still pissed JC fed her grapes that had been on the floor the other day. He also did something to her makeup brushes she wasn’t happy about. Those two have a fake like/hate relationship and have for a while. One of the women grabbed JC’s butt cheeks and squeezed them while he was on the float. I just saw hands and think Rachel did it but I’m not sure. I’m only pointing it out to show JC isn’t the only one who’s done things like that and I didn’t hear anyone losing their shit over it yesterday. (I never hear people go nuts when Bay says offensive things either and she does it fairly often) For me, it just shows we shouldn’t like or dislike a player based off of isolated moments in the house, they all have them. I still like JC, Rachel and Bay.

Rockstar heard Rachel say something about Kaitlyn being a have not next week so I guess she knows where Rachel’s votes going.

Kaitlyn got a severe warning for slapping Fessy on the arm when she was talking to him and trying to get him to listen to her.

JC was told if he kept leaving his mic off, they were going to get the producers involved so his lecture seemed pretty serious too.

I wish CBS would handle these things the way BB Canada does! They punish the entire house for those types of things and the house starts to police themselves because of it.

Swaggy wasn’t offended by Bayleighs comments over her reluctance to his coming back in the game or her reluctance to keep working with Foutte.  He’s tweeting that he hopes she’ll watch her own back and not worry about anyone else. He isn’t even opposed to her teaming up with Brett since Brett lost Winston. I didn’t expect that from him but liked it. He was also recently asked if he knew what the stuff was Bay was whispering to JC the other day about Kaitlyn.(the stuff about how her life would be messed up if people knew what she did the first week) People tried to get him to share the info but he wouldn’t. He said he wanted Kaitlyn destroyed in the game but didn’t want to contribute to her having problems outside of the house. I liked that too.