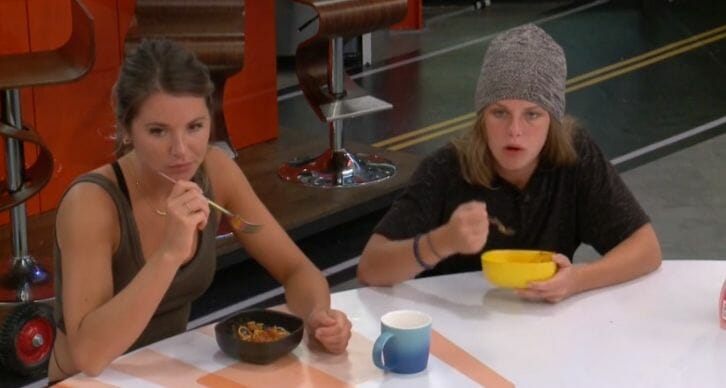 Good morning everyone! It was a slow night with Sam discussing bees, Angela and Kaycee making fruit loop art and Bayleigh thinking she runs the world. We also had the pleasure of listening to a conversation between Haleigh and Fessy that left me wanting to stab my eyeball with a fork! Here we go:

Haleigh made a joke about having sex with more than one person in 24 hours during a game of never have I ever. Fessy was annoyed, made a couple comments about her acting 21 and saying he didn’t want to be with someone who was that “openly freaky.” He followed this by giving her the silent treatment and being a big baby. Eventually, they talked, she told him this is who she is and if he doesn’t like it, too damn bad. She talked to him about moving forward in the game but not being compatible on a personal level. He spent the next day not talking to her and also had Bayleigh in his ear fueling the fire. He talked to Rockstar about it yesterday and said maybe they were just meant to be friends because they are at different stages in their lives. RS said meeting the right person at the wrong time means it’s  the wrong person. (comments like this that got me liking RS in the beginning of the game but then…) During the silent treatment phase, Hayleigh spent hours on the hammock with Brett and Fessy was jealous. Last night, they talked and Fessy apologized to her at least five times for the things he said. He agreed they were doing well in the game together and agreed maybe they should leave it at that. (Problem solved at this point) She wanted to know why he was ignoring her because she doesn’t want to have a game relationship with someone who won’t speak to her. (understandable) He told her what she said about not being compatible clicked with him but he needed a little time to accept it so he’d been staying away from her.  (He was also pouting) At this point, she had what she wanted but it wasn’t good enough. She wanted to have an in depth conversation about why he hurt her feelings and why he said the specific things he’d said. He apologized again and said maybe he was the one acting immature. Fessy came into this house wanting a showmance to get more TV exposure, probably a little girl crazy too and fell for Hayleigh too quickly. This is where he’s at fault. She has every right to flirt with whoever she wants but she knows how he feels about her and she’s had over a month to get to know him.  She knows he isn’t like Tyler, Brett and Scottie and he takes it too seriously. If she’s using flirting as a strategy, why does she keep flirting with someone thats taking it to heart? She wants Fessy to have the same reaction the other guys do but she’s had plenty of time to realize he isn’t like that so if she doesn’t stop flirting with him, she’s also to blame. It comes down to ‘know your audience.’  Not everyone reacts to the same thing in the same way. I was pretty high on Haleigh but I’m starting to think that flirting may be her only strategy and even though she’s telling him she only wants to work with him in a game sense, I’m not sure she knows how to do it any better than he does. This will be the first and last time I get this in depth in the shomance drama. If I wanted to watch soap operas, I’d watch them. I may need a Saltine because I’m feeling a bit nauseous.