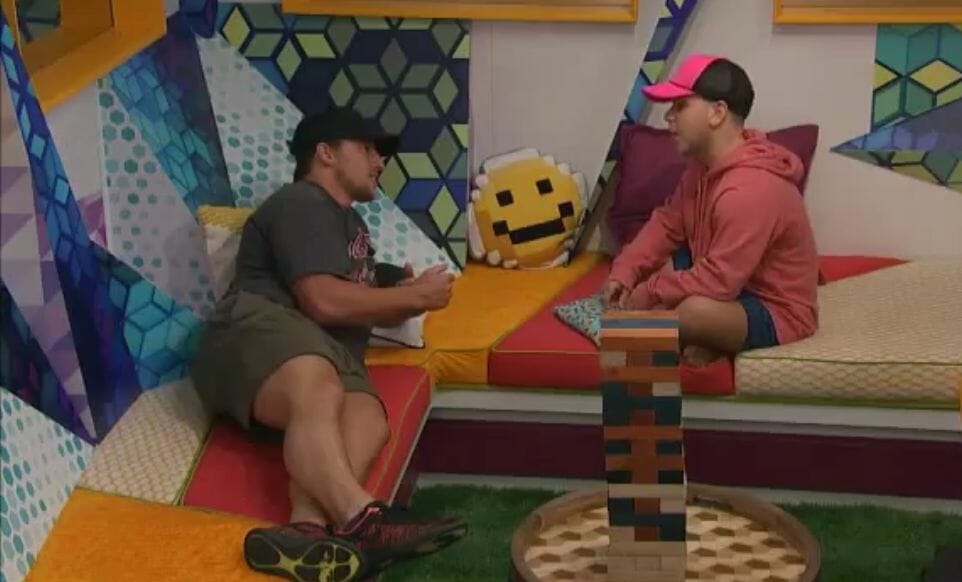 Good morning BBJ family! It’s finally Thursday and we’ll get to end the boring repeat week. Maybe it would’ve been different if Scottie had actually done something but I doubt it. Having returning players simply doesn’t work except for an exciting few minutes of tv.  (You’re welcome tv viewers because we’ve had to pay for that few minutes all week long!)  It’s Scottie vs Haleigh tonight and ehhh, who cares? If you’re L6, they both need to go and they can’t trust either of them. It comes down to rolling the dice and hoping you beat the one who’s left in the hoh comp….regardless, we go back to actual game play after tonight, so yeah!!

Everyone notices JC sleeps a lot and thinks he gets special treatment. He does but others are allowed to nap too. (JC and Hay both napped the other day but her fans were only bitching about JC)  JC does it the most consistently and he ignores production in other ways too. (singing, mic, etc.)  They all have moments but he’s the worst offender by far.  Since he does it the most, people may not have realized he was doing some of it on purpose this week. He was mad because he felt production used the comp results to make him a have not on purpose. He thinks they’re doing it to make sure Angela and Tyler are given space for the shomance to flourish. (I don’t know if they did or didn’t but they do have ways of messing with people who piss them off. They’ve done it in the past and I don’t blame them. They also choose have nots based on comp results occasionally so it could go either way) I DO believe they want that shomance footage!  He’s been sort of protesting this week and not getting up and giving them the footage they want so that’s why it’s been worse this week.  (I’m honestly not sure why some people who say they get tired of hearing JC also complain when he’s sleeping. Isn’t that a good thing?) Viewers yelling for JC to be evicted for breaking rules are dreaming.  He’s great for their show and they love the footage he’s giving them. (Isn’t it obvious? They’ve beat his mastermind storyline into the ground) They can pay him back in different ways for his rebellion, don’t worry.

The recap isn’t much and Steve covered everything from the day so here’s what happened last night:

While looking through the BB hash tags, (I usually know better) I saw people are STILL waiting to see if something will be done about Tyler’s hoh win. I’m going to go out on a limb here and say, I think Tyler will remain hoh. (No, I don’t have the Vegas twitter connections or Kaitlyn’s hits but I’m calling it anyway) Seriously? People are just crazy! Here’s a tweet from the Vegas acct that fueled the drama earlier in the week: 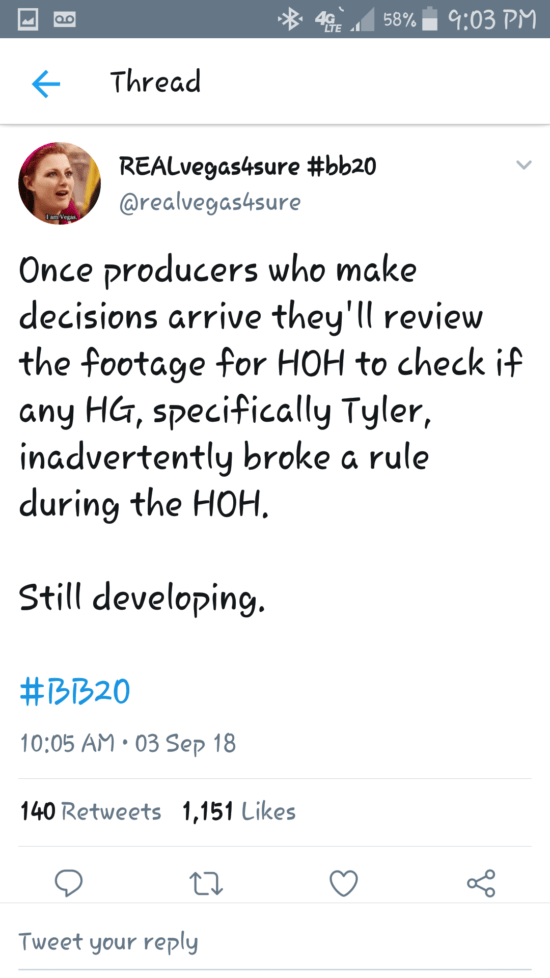 My opinion (and only mine) is that Tyler’s hoh was never in question and was never being reviewed. If you believe the vegas tweet, then that means the following things happened:

Whoever runs this Twitter obviously has some connection to production. They’ve been accurate for 2 seasons when leaking which comps are about to be played. I’m not disputing that and I’ve used them as a source of info too. However, I feel like most of us are reluctant to say that half the time, this person is full of shit! What’s going to happen if I say it? Even if I got blocked on Twitter, I’d see the info on someone’s else’s timeline so big deal.  Some of the pouty tweets remind me of a teenage girl. Maybe it is and their dad works for production. Maybe it’s someone who works on the set building the comps. Maybe production knows who it is and has a hand in the leaks? I’m not claiming to know who they are but I do know that if CBS wanted to know or saw it as a problem, they could get it resolved.

This person would have to have a hand in everything on the show if all the tweets are accurate. How can they know everything hg’s are saying in their diary room sessions, everything about the comps AND everytime the big guns have a meeting to debate kicking someone out? In order to know all that, they’d have to be someone who didn’t want things leaked.

Here’s the pattern (unless it’s a leak about which comp is coming up):        People start complaining on Twitter about something specific and afterwards, Vegas comes out with news saying how it’s being addressed. People start wondering what someone specific is really planning to do in the game and afterwards, Vegas has news of someones DR session talking about the exact thing people are wondering about. Remember when people started wondering if Angela was playing Tyler? Wouldn’t you know, we got leaks that Angela wasn’t into Tyler and was going to go after him. (This was when she won her last hoh….not what we saw happen at all!)