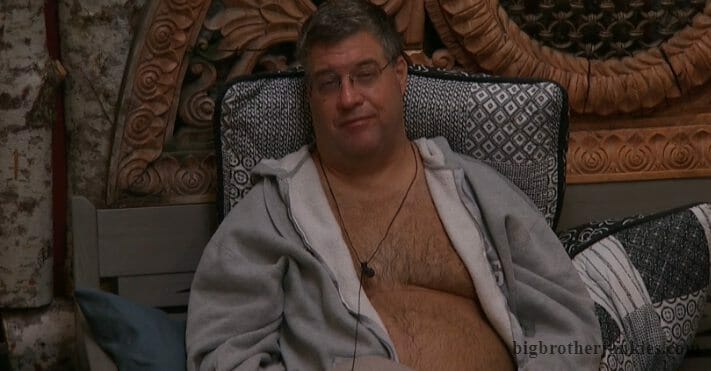 As expected, the veto ceremony will be held Thursday night during the live show followed immediately by Jackson’s pick to evict (Cliff).

Seeing as the feeds are completely dead, I want to take a moment to appreciate Mr. Cliff Hogg. While I have trashed his last week – because let’s be real, on a strategic level it’s been awful – I do want it to be known that he’s still appreciated by me and many other fans. He’s been able to make it through the season while actually playing the game to the best of his abilities, and he came one bad decision away from potentially making the final 2. Let’s remember, he was pegged as the guy most likely to be evicted first by many fans and I even said he’d barely make jury if that.

He made the move virtually everyone (myself included) said was absolutely terrible by sticking to his word rather than betraying Christie when he had a prime opportunity to do so, and it worked. In most reality shows like this, if someone has a power and sleeps on it, you evict them. That’s what should have happened (in theory), but Cliff let Christie keep her power and she ended up not even using it. In fact, it boosted him up in her rankings because she really wanted him out the door but then forgot all about him. He’s been known as the honor and integrity guy throughout the entire season and was going to be able to make a valid argument for that had he made the final 2.

In fact, I think Cliff only loses to Nicole in the current house so that’s quite an accomplishment. Yes, I am becoming more and more certain that this jury is going to be bitter so Jackson is likely screwed. Jackson has absolutely horrific jury management and the only thing he has going for him are his comp wins. Keep in mind, a bitter jury overlooked Paul’s brilliant puppetmaster performance along with being a target from day 1 and winning 8 hoh/pov comps to give Josh the $500k. Josh, the guy who was hated by the house and walked around bashing pots and pans. He did absolutely nothing other than what Paul told him to do and he won half a million dollars because he was smart enough to leave them nice goodbye messages.

While every season has different jury members, I’m just showing how far a bitter jury can go. BB19’s jury was probably more bitter than any jury in the show’s history but Jackson also doesn’t have the resume Paul did and whoever he’s sitting next to (Holly, Nicole, or Cliff) have far better relationships with the jury than Josh did. Well, Nicole and Cliff. I’m not too sure how Holly’s relationship with them is.