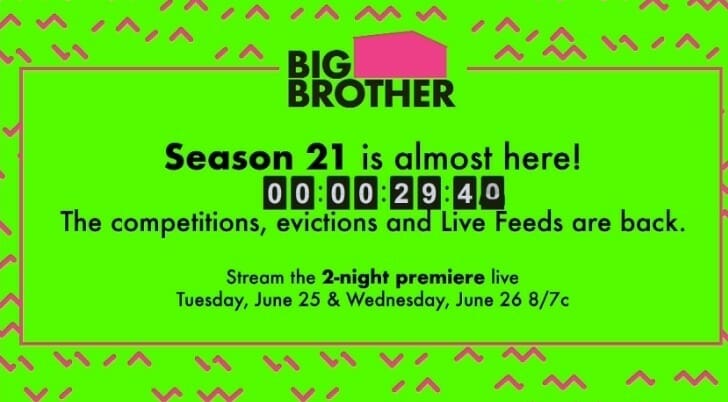 It’s time! The pre-recorded shows are out of the way and it’s time for actual live Big Brother (watch along here!)

I want to talk about the episodes, but there isn’t really much to talk about. It was two days to kick David out only to basically promise that he’ll be back in the game. How will he be back? My guess is it will be a weekly thing where someone gets banished from the game and they sit in a ‘time out’ until the next Camp Director ceremony.  Again, this is strictly a guess but I’m thinking this banishment thing isn’t done yet because they really want to stir up drama and the best way is to have someone get booted every few days (once a week?) only to come back a week later. Of course, there will still be a normal eviction every week so I guess two people would leave?  Just a thought. I’m not sure that would even be a good twist, but it’s just something I can see them doing to try and stir drama.

Enough rambling, feeds are about to go live. Not sure if noms or veto have been played yet as the first two weeks inside the house are the longest (we only see a week of it), but there is a very good chance noms have at least happened.

I’m going to wrap this post up for now. I have an early morning tomorrow but I’ll be back to recap the overnight in the afternoon and then live blog through the day! Have a good first night on the feeds and stay up with the comments