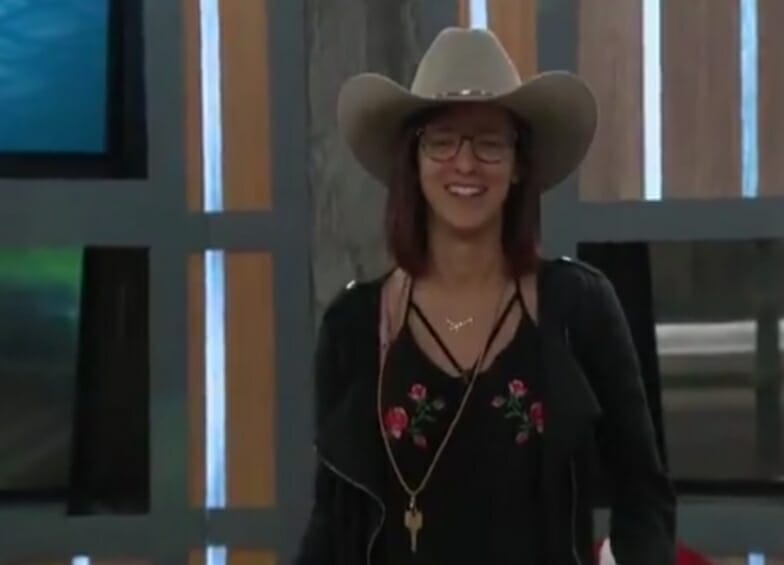 (Steve’s note – have some stuff to do today. I expect it to be another slow day but it’s an important veto comp. Hopefully I am home before the veto comp ends and can update you as soon as I hear who wins!)

Howdy ya’ll. Nicole practiced her southern speak last night so I thought I’d chime in too. I usually start off by summarizing the prior day, giving my opinions and follow that up with a more specific recap of conversations and game talk. I’m going to reverse it today because in all honesty, I don’t know what to say. Hopefully, by the time I’ve reviewed what happened again, I’ll have something to contribute because right now, I don’t have a clue. I’m trying to think back, but I can’t remember ever witnessing what I saw yesterday. Other than casual conversation and 4 bored and tired hg’s, here’s what happened:

One of the things I like about Nicole is how much she talks to the cameras. I didn’t like it when people like Jack, Jackson, Christie, Tommy and others would do it for the specific purpose of creating a narrative to contradict things I’ve already seen. I enjoyed listening to Cliff do it too. (For a while) I like hearing peoples game plans and strategies and I’m glad Cliff didn’t stop after he was caught.  However, I don’t like to listen to Cliff as much anymore. Sure, he tells us his plans but he’s also working for Americas Favorite Player and that’s annoying. A lot of the stuff he says is geared towards us loving him and making him AFP. Tommy and Kat did the same thing.

Beth did some good work here and she was pretty convincing. Of course, she’s dealing with people who want to be convinced and that makes it easier. She should still get the credit for finally acting like she wants to win and fighting to make it happen. From what I’ve heard, it sounds like Jackson did all the work on Thursday to get the vote to go her way so I’m  not giving her props for it just yet. Once we see how things played out on Thursday, I may have to change the way I see it. If she made it happen, good for her but so far, it sounds like this is another move Jackson should get the credit for. As for yesterday, she showed signs of the Beth we saw early in the game. This was way back when I said, I thought she, Jackson and Tommy had the best chances to win in my opinion. (Yes, she’s still Beth to me. It isn’t because I think I’m being funny, it isn’t to disrespect her and it really isn’t that serious. If she wins the game, I’ll probably be on here saying “holy shit, Beth won!”)

I have no idea what Cliff is thinking. I get it, he wants to secure a spot in the F3 but this wasn’t the way to do it. He hasn’t played an amazing game but he’s played an ok game. Considering his starting position, he’s actually played a good game and used what he had to work with but this is so sloppy. One of the reasons I liked Cliffs game was because I thought he made the safer move with Christie (regarding her power) in order to gain trust with people. (Ya, I wanted the other move too) That’s great currency to have in a house where people can’t be trusted. It worked and the rest of the game, he was able to accomplish things simply because people believed him. I also liked it because I thought (based on things he said to the cameras) he was going to cash in all the currency near the end of the game. Instead, he just plans to keep making deals and keeping his word. To me, this is like saving up money to bu a car. After all the time spent saving, you go out and buy a boat instead. Worse, you don’t live anywhere near water. I don’t  know if it’s arrogance, like Jackson said or if it’s just losing perspective as we near the end. Cliff isn’t a stupid person so I can’t understand why he thinks Jackson or Beth would keep a deal like this, especially after they let it be known all week, they almost turned on them and kept Tommy.

Beth made a mistake by not winning the veto. Yeah, yeah, yeah, everyone says the hoh doesn’t matter and I’ve already said, yes it does. It’s gets your ass into the F3 and that has value. It has more for her if the veto comp is mental because she’s the worst at the days. We all know why she kept her word too and it’s why she’s beating herself up over it. It’s one thing to make a move for game reasons and it simply not work out but that’s not what happened. Sure, she made the deal for game reasons but she kept her word because she spent days saying (where we could hear) how honorable she is, how much integrity she has and how she’s playing with morals. She felt like she had to put up or shut up. She had to prove she was a better person than Nicole. Nicole almost betrayed them but she never would and that’s what throwing the hoh was all about. It’s F4, so other than jury votes, what can happen from breaking the deal?

Nicole screwed up lately too. Cliff’s the biggest mouthpiece over what happened yesterday but she certainly played her part. I agree with her about it all coming down to the veto and she’s already in the F3. It doesn’t hurt her as much. She needs to be more worried about the F2. It sounds like she is but she could be in more trouble with the jury than she would’ve been. Originally, Nicole didn’t stand a chance because it looked like she was playing Cliffs game.  She won some comps, saved Cliff and started building her resume. Tommy vs Beth didn’t matter nearly as much as the way the jury may perceive the move. She was better to say nothing than to fight for Tommy and cave in the end. This would’ve  been seen as Nicole’s big move to split up the shomance and Tommy was impressed. (So was Cliff and he began to worry she’d give him competition in a F2) Now, Tommy heads to jury to explain that Nicole attempted a move but Jackson blocked it. Tommy leaving is Jacksons move now, not Nicole and Cliffs, even though they had the only two votes. Nicole also read Jackson very wrong. When he hinted at being ok with Beth leaving, he didn’t mean now. He meant at F4 and was only trying to secure himself a spot in the F3. Combine that with the fact it wasn’t even true, it was very naive on her part to think he meant it.

As far as Jackson goes, he’s doing what he needs to do. He’s never planned on letting Beth go and why should he? Even if they continued to fight, she’s at least a possibility to win a comp. She’s  never voting against him and he knows it. Why would he send her to jury mad at him when he can keep her there as someone who’ll take him to the F2?

I’m still at a loss as to what the hell happened yesterday and those are the only thoughts I have off the top of my head. I’m ready for this veto, that’s the only thing I know for sure! Sorry this was late today and have a great Saturday.