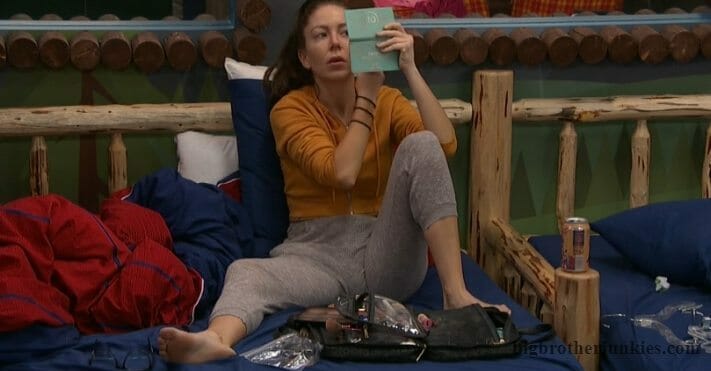 If you’ve been around this site for some time, you’d know I mainly like to talk strategy and game. That’s because strategy and game are neutral topics and I try to stay as neutral as I can while still being a fan of the show. I always feel people reporting the stuff should be a little unbiased because a ton of people read this stuff and should draw their own conclusions from what is done in the house. As a commentator of the show, I throw out my opinion of moves like how I felt Cliff made a bad move in not breaking his word to Christie back when she had the power (however, I also admit when I’m wrong which I was there because he’s in the final 4). I also like to look at the decisions from the perspective of people making the decisions, regardless of who it is. That is why some weeks I’ll talk about why this move would be good for Jackson then another week talk about why another move would be good for Nicole.

I think I’m only telling you this because I feel guilty over my lack of hourly updates this past week but that’s because there hasn’t been anything going on. I still sit here all day with the feeds on, but conversations about Jackson’s frat life or Holly shitting herself while being a tour guide are fun to listen to, but I don’t think I’d do them justice by re-telling because I suck at telling stories and suck worse at transcribing conversations. Now that the Holly thing is in my head, however, she said she was sick while out in the wilderness with a group of high school girls. Ended up shitting herself and had to clean up in a lake. The way she told it was far more entertaining and made more sense than me re-telling it just now and that’s why I often don’t.

Another reason why I explained that is because there are sometimes reasons why I report some things and not others. Like reporting Holly and Jackson had yet another fight last night would typically be boring stuff I really don’t care about, but that could actually impact the game, and here is why (as I finally get to my point). Last night I talked about their decision to evict Holly or Tommy and one of the biggest variables to evicting Holly would be Jackson’s potential bitterness toward Nicole and/or Cliff over it. However, if they keep fighting, there is a very strong chance that Jackson is not going to put up much of a fight when Nicole and Cliff tell him they’re evicting Holly and may actually be on board with the plan.

If Jackson is on board, or at least won’t cry about it, I am beginning to think evicting Holly is just the overall better choice. Jackson will almost certainly win the veto this week and he’ll be the one deciding who goes to the final 3 with him. If Jackson is not bitter, there very well may be a scenario where he evicts Tommy and takes Cliff and Nicole. If that happens, there is about a 99.9% chance that Jackson will be in the final round of the HoH but if he actually does win, he’ll be forced to take either Nicole or Cliff to the final 2. While I’d personally prefer Nicole and Cliff in the final 2, this is probably the next best thing because Jackson is fairly beatable in the final 2. Yes, he has won a lot of competitions, but he’s also screwed over quite a few people in jury.

I could very much picture a scenario happening where Jackson wins the HoH and takes Nicole to the final 2 and loses – just like Paul in BB18 when he also won the final HoH and also lost to a Nicole. Paul won 6 competitions that year but pissed off too many people in the jury and lost.

Meanwhile, more Jackson stories. This time it’s about how he swallowed a quarter during that game quarters.