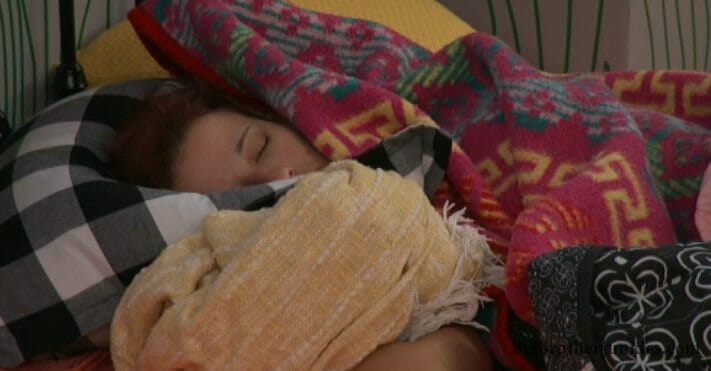 It’s Monday and I don’t think there is a veto meeting today which makes sense based on previous seasons. My memory isn’t amazing, but I do know at this point in the game there are typically 5 people remaining which changes this week up quite a bit. Going from 4 to 3 is typically done over a two-day span and it’s not shown on the feeds. Every season I’ve blogged, they take the feeds down on Tuesday for an eviction that airs on Wednesday and the feeds don’t return until Thursday night.  Also, I’m fairly sure the veto meeting doubles as the eviction ceremony and the remaining person stands up and casts their vote to evict live.

Again, don’t hold me to that because my memory may be off, but I’m fairly sure that’s how it goes and that’s why I don’t really know what’s going on this year.

This means the veto meeting should take place this Thursday night live on the air and Jackson can give his big speech that further sinks his chances in the finale. He plans on explaining his decision to vote out Cliff by saying it’s due to Nicole and Cliff breaking their word to them. The problem is, Nicole and Cliff didn’t break their word (they only considered it), and everyone and their mother knew that Jackson was going to find a way to take Holly to the final 2. He wasn’t going to make up this massive lie and cause a ton of drama (with Tommy) to save Holly only to scrap her at the final 4. With him making up excuses, it just cheapens the move. Just own it. You’ve been banging Holly all summer and there is a very real possibility that you two walk away with a combined $550,000. Nobody is going to fault you for breaking the word of an alliance you formed like two weeks ago.

Also, I was thinking more about Nicole being upset last night and feeling super guilty that it’s her fault Cliff is going home. She thinks she should have given him the final HoH because he is the one who did most of the scheming and deal-making to get them to that point. While that part is true, he’s also the person who talked Nicole into evicting Tommy over Holly which killed their chances at making the final 2 together. I’m aware that there was still a chance that they could have made it to the final 2 with keeping Holly, but that path relied on a few competition wins which neither are good at (compared to Jackson). Had they taken Tommy and Jackson won this veto, there is a good possibility he would have evicted Tommy this week rather than Cliff.  Then there would be a guarantee that either Cliff or Nicole make it to the luck round of the final HoH where it’s essentially a coin flip.

I’ll say it over and over that Cliff had a really solid game and made it much further than anyone expected him to. I don’t want to take away from his ability to get this far by trashing his late game, but the reality is, he let $500k slip away from Nicole and himself when he talked Nicole into keeping Holly. The frustrating part is that Cliff is the person who made the best argument to keep Tommy last week and that was because of what just happened. He said if Tommy stays, there is a path where he can win or finish 2nd. If Holly stays, there is a very real chance he finishes 4th place.

Let me also add that Jackson deserves major credit for his ability to flip Cliff, but that’s a different post at a different time.