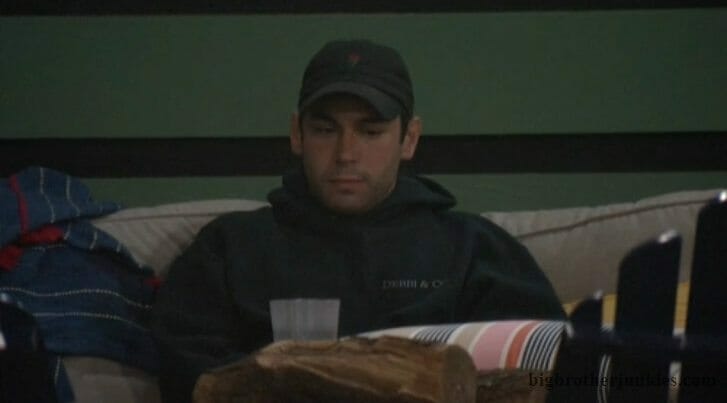 Today has been a fairly slow day but it is setting up for a potentially explosive week as accusations have been flying about Nick’s loyalty shifts all season. Analyse confronted him about possibly throwing the HoH competition because he felt he was safe, but Nick denies it and says he was sure he’d be on the block once Jackson won. Nick then begins crying and telling Sis how much he cares for her and wants to work with her blah blah. Typical Nick behavior, and like typical Sis behavior, she eats it up. That wasn’t really a fight but more of a quick discussion followed by Nick constantly making these horrific snorting noises which became too disgusting to listen to. Just wish he’d blow his nose then continue talking.

A few hours later, Christie got some time alone to have a very similar conversation, however, she wasn’t as nice as Analyse was. Nor was she really buying what he was selling. She told him that she doesn’t really respect his game and she knows he’s going to screw someone over because far too many people trust him in the house. That’s what happens when you play the middle, you inevitably piss people off (ask Tyler).

The ice under Nick’s feet is getting thinner and thinner the longer he stays in the house and the longer he keeps up his incredibly fake act of being everyone’s friend. He’s a great liar but poor diplomat so when the lies catch up with him, people are going to be bitter. Christie already seems done with him as are Jackson and Holly. The only thing going for him is he may end up being the Josh of the house and get carried along because he’s disliked by everyone leaving. That obviously worked out well for Josh, perhaps Nick can have the same fate?

Christie said she’s going to blow up his game tomorrow over dinner but after the talk tonight, I’m not sure she still will. It seems like she got a lot of what she wanted to say out so she’ll probably just feel too weird to repeat it. Maybe. Hopefully not. I’d like to see a few more arguments before the season is over. There haven’t been nearly enough for my liking!

Alright, off to bed, updates in the comments.