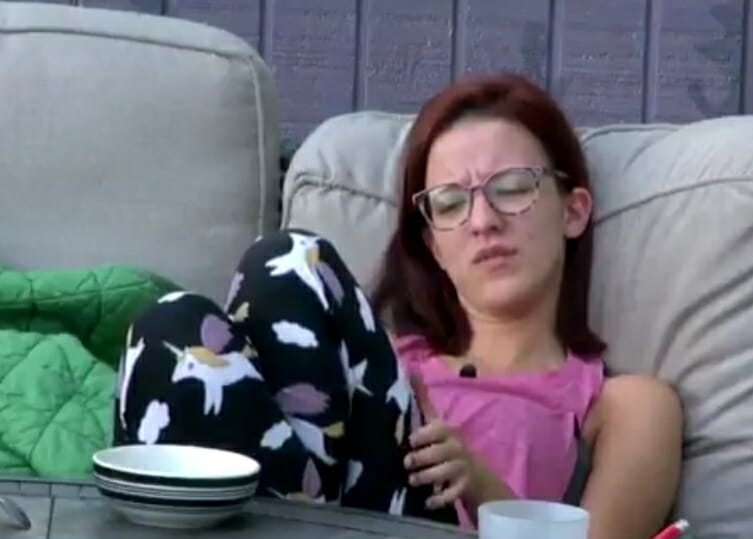 Good morning, It was a slow one yesterday and mostly consisted of Cliffs plan for not giving up, how many places Beth can nap and guessing how many times Jackson would have dinner. Before I recap, thank you again for any donations you’ve sent and I apologize if I haven’t messaged you yet. There were a few sent just as I began a job out of town and the phone service where it’s at is terrible. I’m a little behind on my emails but I do plan on contacting you. Before I head back out to no mans land again today, I’ll quickly go over what happened yesterday:

I’m not going to cover every time or every comment but just to give you the vibe in the house, Beth complains about her 1000 medical issues constantly. She’s also gone from being annoyed and resentful towards Nicole to trashing her every chance she gets. She’s never liked Nicole but she did managed to fake it. It got worse when Jackson started acting like Nicole was his sister and a few snide comments started.  Once she threw the comp to her, it’s  turned into open dislike. Beth can’t stand her and can’t stop talking about Nicole being a terrible person and saying her parents won’t be proud of her.

There’s people who think Nicole is acting spoiled because she isn’t getting her way this week. Sure, she’s bummed out Cliff is leaving and she’ll have to fight against a capable shomance in physical comps. She’s also really annoyed at the way Jackson has handled everything but I think people are lumping two different things together. Nicole hasn’t been mad because Jackson is taking out Cliff. She even told him (repeatedly) she understands why he’s doing it and said it’s a great game move. Her issue with Jackson (which she also told him) was the way he’s choosing to do it. Jackson’s handling this the same way he handles arguments with Beth. He need everything to be someone else’s fault. He should’ve just said “I’m sorry, it was 2 vs 2, I won it and this is the move I have to make because it’s best for my game.” They already know so his continued denial is insulting their intelligence. Maybe that works on Beth but it doesn’t work on the Nicole.

It’s a long shot for Cliff to stay but based on Jacksons personality, it isn’t completely impossible. Don’t get me wrong, Cliffs not staying but if they’d take their plan even further, I could see it as a very slim possibility.  I think they had the right idea when Cliff said he would tell Jackson he would campaign for Beth instead of Jackson. Where they’re failing, is not  taking it to the next step imo. Jackson is there for himself and no one else. Yes, he’s worried about his image and sending out his shomance would make him look bad but he still wants that money. We’ve also seen Jackson have the ability to find a way to blame Beth for everything. In this case, he wouldn’t even have to to that.

Cliff and Nicole need to be doing 3 things:

This plan probably wouldn’t work either but they’re planning on trying to guilt him and use his image against him.  I don’t see that working because he’s already come up with his reasoning for going back on his word. They need to come at him with something he doesn’t already have his “story” mapped out for and they need to make him worry about the votes. It’s just a thought because let’s face it, we don’t  have much to talk about at the moment.