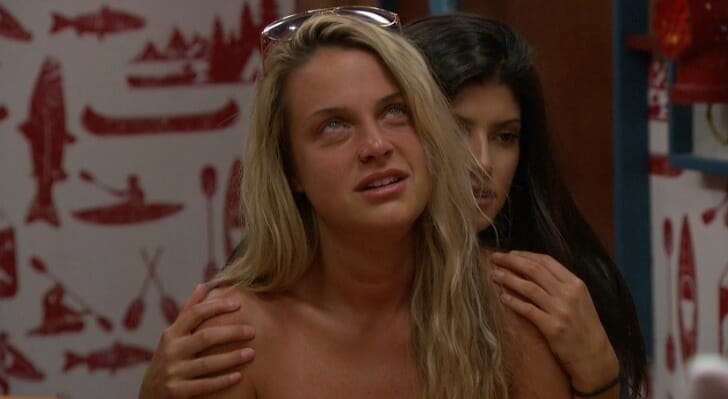 This week has been one of the longest periods between the veto competition and the actual meeting in quite a while, and that extra time will be a huge benefit to Kemi who was suddenly saved last night by the guilt Christie had of kicking her out.

Up until last evening, it was a sure thing that Sam was going to save Cliff and Kemi would be the replacement nom who would then go home. Around 5, Christie began crying under the stress and guilt of basically doing the dirty work for Jack this week. All the girls in the house gathered together to comfort her which likely made the plan of booting a girl that much harder, so she made a decision to speak with Sam privately and try to figure things out.

Christie and Sam went up to the HoH room where she explained to him the situation of how she doesn’t want to get Kemi out for essentially no reason at all. She told him that Kemi did come into the house fairly hot, but after a day or two, Christie had no issues with her. The problem came from Jack who didn’t get along with Kemi and wanted her gone. From the sounds of it, Jack has been treated like a king by the girls since day 1 (gee, I wonder why), but Kemi hasn’t been involved in that. She didn’t kiss Jack’s ass and the two ended up butting heads over it. It became Jack’s goal to get her out of the house likely for both personal and strategic reasons, and he has been pressuring Christie to make that happen. So far, Jack has been able to get by despite making stupid move after stupid move because he’s been treated like a king. For someone not to worship him, that is a threat to his game as Jack knows she’ll expose him.

Sam had no issues with Christie changing her re-nom target, but he was concerned about him not being able to use the veto because he promised Cliff and also told his group of friends he was going to use it. This made sense to Christie, so the pair tried to figure out what to do. Sam tossed in Jack’s name as a re-nom possibility, but they didn’t think they’d have the votes so that idea went nowhere. Sam suggested Ovi who hasn’t really been a big player in the house and Christie jumped all over that. She loved the idea and that quickly became the plan. This is because Ovi is one of Jack’s targets so she can still pretend she’s doing his dirty work, and it gets the least amount of blood on her hands because he’s really been more of a loner all season.

I understand Ovi was a pre-season fan favorite and I actually ranked him fairly high, but he has rubbed a lot of people the wrong way and this really does make the most sense for Christie at this point in the game. I wrote a few days ago how bad it would look if she were to get Kemi out, but Ovi – despite also being a minority player in the house – is a bit different for a few reasons. Christie has made it pretty clear that she’s all about the girls, so getting rid of a guy first would make the most sense to her. Getting rid of a guy while also getting little blood on her hands would be tricky except for two people – Cliff and Ovi.  Nick, Sam, Jack, and Jackson have all meshed with the house and would certainly cause problems for Christie if they were to go. Tommy has also meshed, but he also has his secret personal alliance with Christie so that was never an option which is why I didn’t include him.

Once Cliff is saved by Sam, that leaves just Ovi as the lone sacrifice. If she’s determined to get out a guy, Ovi is logistically the only option she has regardless of skin color. To the casual fan, it will still look fairly weird to see David then Ovi go, but to anyone who has been following closely, this is much more about Ovi having a penis than anything to do with the color of his skin – at least from Christie’s perspective.

Anything can change over the next few days, especially with Kat continuing to have meltdown after meltdown, but it sounds like Ovi’s time in the house is going to be a lot shorter than most fans have planned.

Veto meeting should be today. I am working tonight (I cut my days back for the summer to blog more) but hopefully the live feeds can still be covered if anything exciting happens. Have a good day!