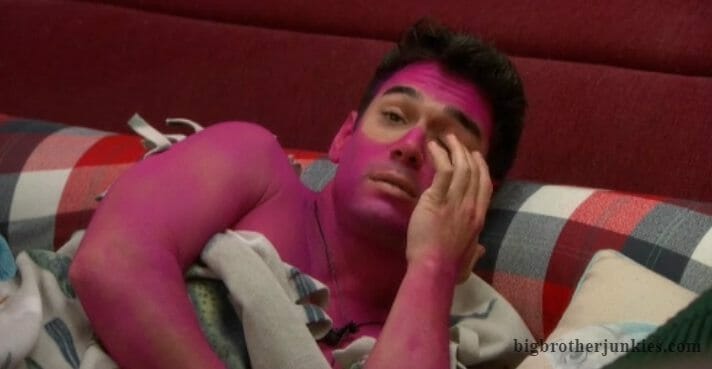 First, thank you everyone for their well wishes on my father. Yes, he’s having health issues again and it’s tough to see. I won’t get into too many details but I just wanted to say thank you for that.

Now, on to the feeds. Let’s see if there is anything to really talk about…

Not entirely true. I guess Big Brother is entertaining itself by now putting fake calamine lotion on Christie and Tommy for their fake poison ivy. Personally, I think a much more fun punishment would have been to strap real poison ivy to their outfits, lock them in a room for a few days and see what happens. But nooo, lawyers and junk probably wouldn’t like that. Lame.

Regarding the veto tomorrow, it sounds as if Kat may be volunteering as a pawn which is probably the best news Sam can hope for I guess. Well, the best news would be Christie volunteering, but that’s not realistic so this is probably as good as it gets. Who knows, maybe Christie will get super paranoid again and bug them so much that Holly ends up nominating her (yea, right).