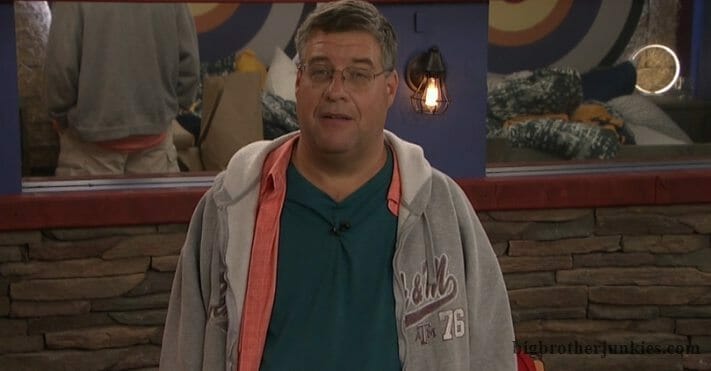 It’s late so I’m not going to write a ton, but I wanted to just ramble on about the current situation in the house.

We have two different sides with two very different takes on how they see themselves with this betrayal/flip/whatever. On one side, you have Jackson who feels justified for taking Holly over Cliff (to the final 3) because Nicole and Cliff tossed around the idea of voting Holly out instead of Tommy. On the other side, you have Nicole and Cliff who feel justified because Cliff was going to stick to his word and take Jackson to the final 3 had he won veto (I know, not a very realistic scenario but he was going to stick with it regardless).

Jackson feels betrayed by the other side while the other side feels betrayed by Jackson. Notice one key element to everything I’ve written so far? I’ll give you a hint: Right now we’re in the final 4 but I’ve only named 3 people feeling betrayed. That’s because Jackson has been doing a lion’s share of the dirty work for that side and Holly is basically seen as an add-on, or a DLC (if you’re a gamer). It’s Jackson who did most of the lying, deal-making, etc. Shit, we even saw that Cliff and Nicole kick Holly out to call Jackson in and confirm the deal. Everyone has basically dismissed Holly and she has noticed it when she said “gee, thanks” earlier when Jackson said she’d be the easier person to beat in the final 2.

And once again, Jackson is right with his take and that is why there is a very real possibility that Nicole takes Holly to the final 2 should she win the final HoH competition. At this point, I simply can’t see her taking Jackson so we’re almost at a 50/50 of this final 2:

Jackson and Holly or Nicole and Holly

I used Dr. Strange’s tools and looked into the future and saw no possible situation where Nicole is sitting next to Jackson at the final 2. I would put money that Holly is guaranteed at least runner-up at this point and I’d even put some money on her winning it all. I’ll count the votes better when I think about it more, but I do know the bitterness toward Jackson runs pretty deep in that jury and Holly very well could pull a Josh and beat someone who won a ton more competitions but wasn’t well-liked. Unfortunately, Dr. Strange wouldn’t let me go far enough to see the actual winner, so you’re going to have to settle on the final 2 instead.

The one thing I do know is that Nicole should sleep very well after the edit Jackson had tonight. She is worried about how she and Cliff will appear to us after the big betrayal but she is coming off really well. Jackson is coming off as terrible, and Cliff is actually coming off pretty bad as well. It’s going to look even worse when his selfish act of keeping Jackson for his own gain ends up putting him in 4th place. I have a feeling that Nicole has America’s Favorite on lock and the only way she doesn’t get it is if she wins it all and they decide to give it to the next person in line (as AFP seems to be a judgment call as to whether or not the winner/runner-up can win it or not).

Alright, enough rambling. Now that Cliff knows he’s going to jury, the week is bound to be slow so I’m sure I will elaborate on vote counts and so much more this week as there won’t be much to talk about regarding actual feeds. I’ll also be interested in seeing how the veto plays out as usually this veto just evicts a person on the spot (if I remember correctly). This veto also usually happens on Tuesday with the pre-recorded eviction that airs on Wednesday, but that isn’t happening this year because there are already only 4 people in the house.

Recap in the morning!