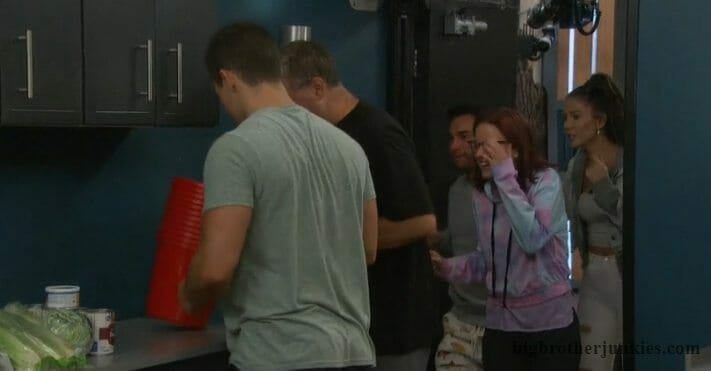 There isn’t really much to talk about inside the house (and really hasn’t been for like two weeks now), so let’s just recap the CBS episode…

It was boring, and I fast-forwarded through half of it including the Scammy C segment. I never really had much of an opinion of him on the show but he should have been canceled after that charity scandal. Bringing back old house guests is always just awkward and uncomfortable and makes it worse when you know that person sucks and CBS keeps trying to force them on us.

Alright, back to the game. As mentioned, not a lot going on. Nicole is having second thoughts about going to the final 4 with a showmance and will likely be flipping back and forth on who to keep between Tommy and Holly until Thursday night. It’s good of her to do that because it’s an extremely hard decision and one that should be debated back and forth. Many are saying that getting rid of Holly is a no-brainer but I pointed out why it may actually be better to keep her. To summarize, I personally don’t think Nicole beats Tommy in a final 2 situation while I think she can beat Holly.

I do want to add to it that another counter to my own point is that Jackson winning veto guarantees 2 slots in the final 3 if they get rid of Tommy. Getting rid of Holly doesn’t guarantee it if Jackson wins veto. Yes, he will likely be bitter that Nicole turned on him and got out Holly but he also knows the Christie/Tommy connection so he may be forced to evict Tommy at the final 4 regardless. Tommy is not just a threat to Nicole, but he’s a threat to anyone in the house. He’s had a fantastic social game this season and very well could beat any remaining player if he’s in the f2 with them.

So, let’s pretend Jackson is going to win the next veto competition because he probably is. Do you think he’d take Cliff and Nicole to the final 3 if they go back on their word and evict Holly? I honestly don’t know at this point. Let’s poll….

Remember, this poll above is only in the situation that Jackson wins veto (which he probably will) and that Cliff and Nicole vote out Holly. What are your thoughts?