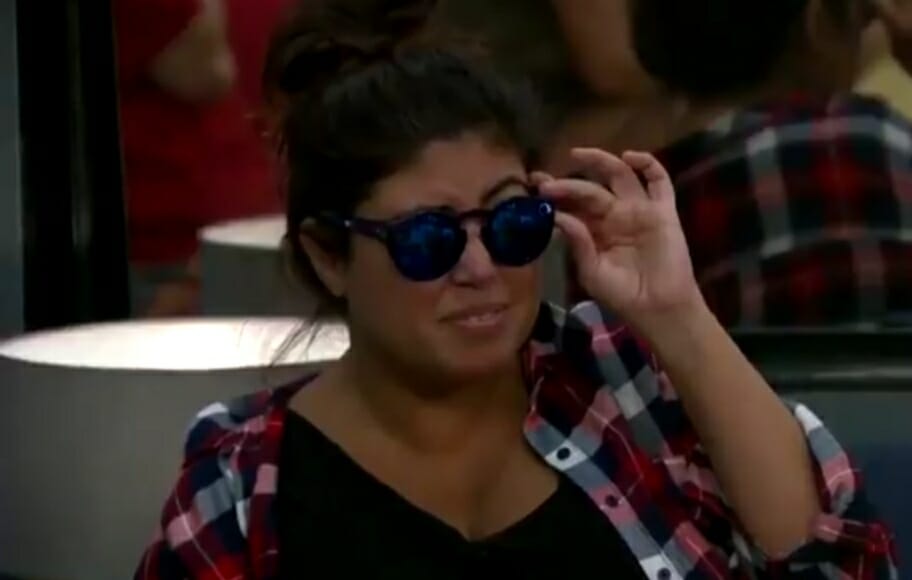 Good Monday morning! I hope ya’ll had a nice weekend. It was a slow one on the feeds and I was able to get a lot done around the house.  I’m glued to the feeds when drama is happening but during normal conversations, I just pop in earbuds and go on with whatever I’m doing.  I usually set it to Quad cam and have one conversation in one ear and a different one in the other. It can get a bit confusing when my husband’s home and tries to talk to me because good luck to whoever is trying for a 3rd conversation.  He was busy anyway by either pissing off the new neighbors or becoming everyones new best friend. (the verdict isn’t in yet)  We mostly moved to downsize and have less yard, less house, etc. We left over 30 acres to temporarily live in a subdivision with a small yard. He obviously hasn’t adjusted yet because he spent the weekend mowing everyones yards in the area, even the ones for people who didn’t ask and a few for people who weren’t home. This will either go really well or really bad.

Last nights episode wasn’t very exciting but I’m fine if they want to show clips with more strategy and game talking instead of comps unless it’s like Steve suggested. They could do a comp for a punishment, have nots or whatever doesn’t actually impact the game. The Sunday show had always been an issue for production unless the hoh comp is endurance and carries over from Thursday to Sunday.  It’s why we ended up with some of the dumber twists like Roadkill, Battle  of the Block and the Tree of Temptation. They need the filler and using Sunday to show clips of the actual game play would just be too outside the box for them, right? Last night was mostly fluff but what they were mostly doing last night was giving viewers an explanation for the zings that are to come this week. Otherwise, tv viewers won’t get most of the jokes.

Yesterday started with Nick telling Beth he was the prankster. Did he really think she didn’t know already since he’d told Jackson? He made mostly the same pitch to Beth as he did Jackson the day before. He said they could use his power to renom whoever they wanted and he was loyal. (This might have been smart as a trade off to stay off the block before Beth made her nom. Now, it just reeks of desperation and doesn’t seem sincere)

Tommy talked to Nicole and Christie about the way Nick is constantly interrogating him about his sex life. I know there was some discussion yesterday about a late night talk Nick and Tommy had the night before. I chose to leave it out of my recap for several reasons. First, it’s already been established how Nick behaves and throwing more examples at people isn’t necessary.  Second, I try to recap things that are related to game play but mixed with irrelevant stuff that happens to interest me. (That didn’t) Third, and probably more selfish, I complain when I have to include stuff that makes me feel like I’m covering a soap opera with the shomances. I’m damn sure not going to feel like I’m recapping porn. Besides, these were two adults who had the choice to talk about these things or not. Tommy is close enough to Nick to tell him he didn’t want do talk about it and not answer Nick’s questions.

Beth told Jackson they need Jess gone sooner instead of later because she’s sure Jess will go after Jackson. Jackson was also trying to figure out why Nick was attempting to save Christie when he thought they were against each other.  (So are we Jackson, so are we)

Tommy told Beth and Jackson he explained to me Nick that his vote was already promised to Christie.

Beth and Christie began getting in trouble for talking about their DR’s. Beth, who was obviously frustrated started yelling back at BB when they told her to stop.  She said if they had let her talk about what she wanted to instead of telling her what to say, maybe she wouldn’t be trying to talk about it now. Look, I’m not a fan of Grandma Beth but I happen to agree with her on this one. (Yeah, it’s been a while since we’ve brought out “grandma” so it was time. BB17 had Grandma Meg and in BB18, we had Aunt Grandma so we were due. For the record to all of you sensitive folks: No, I don’t think Beth looks like a grandma but I’m kind of an a**hole and I don’t have a problem making fun of whatever happens to trigger them.)

Other than pie wars, the biggest thing happening yesterday was Beths anger. She talked about wanting to self evict because of how she thought she might be portrayed on the show. This all stems from her zing. If I’m not mistaken, Nick brought this up first after he asked about it in a DR. They gave him an explanation or definition of a buzzard. (As usual, feel free to correct me in the comments if this is wrong)  She first thought it referred to her being older that Jackson or looking old on the show.  They started thinking it was something else yesterday. Tommy broke it to her that they may have been referring to her getting Kats sloppy seconds since buzzards are similar to vultures and eat or take whatever is left. 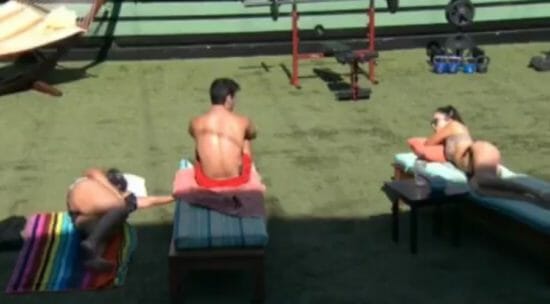 Beth was pissed. She said she didn’t want to be portrayed in a way that is an inaccurate or have her reputation damaged. She said they were trying to misconstrue (one of her favorite words) the truth. (Cody would have definitely called these victim noises) Once she had a little more time to think on it, she said the show was using an “alternate time line” if they were trying to make it appear something different than it was. (She wouldn’t come out and say it, but she’s trying to create a narrative that if it appears on the show Kat was with Jackson first, it’s a lie and the show is playing clips out of sequence)

Although she was getting a bit of sympathy, it wasn’t nearly enough.  She stood in the kitchen spewing all this while others continued their own conversations. I can understand that because they’re playing a game and no one wants to look at her and say “yo grandma, you’re full of sh*t.” Jess started talking about how the camera catches everything and everything they say or do can be used against them. She said it’s why she’s careful about what she says. Jess may be bad at this game but when this is over, she’ll have a job and be able to go out to eat with her family without them all having to wear mardi gras masks. That’s worth something, just not 500 K.

I’ve been saying forever that Beth does this strange thing with the camera. She doesn’t want to stop doing whatever it is she wants to do simply because it’s being filmed so she constantly denies certain things are going to be filmed, despite being told otherwise.  She talks to the camera and tells us things happened in a different way then we saw them happen.  For example, she can bang Jackson in a room with Christie and Sis laying 4 feet away and the next day, she’ll create a conversation with Jackson where she seems to be talking to him but she’s really talking to us.  That’s when she’ll say something like “I’m conservative girl and I would never do something like that” and “I don’t want something to be portrayed that isn’t true because that isn’t who I am.” It’s the same way she speaks to Jackson about name calling and bad behavior. She’ll say “I’m a good person who wouldn’t talk about people” and “I only want to play this game with people I respect.”  That’s supposed to erase the footage of the nasty things she said about other people in the house. She explains away Jacksons behavior the same way sometimes. It’s a ‘believe what I say and not what you see’ strategy.

Nick told Nicole hes very disappointed that Tommy isn’t voting for him because he had promised. He said something close to “when the one person you’ve been loyal to this whole game won’t vote for you” and I hope Nicole didn’t miss it. It will make it easier to vote him out. I still don’t  think he’d stab her in the back but it’s good for her to be aware she isn’t his only play.  She told him Cliff may not be keeping him and he seemed upset by the news. He also didn’t understand it because he said Christie is Cliffs  target and that’s why he put her otb. (Not true)

Jackson told Jess Nick was the prankster trying to score some points with her. He said it’s  why he won’t use the veto. He said he doesn’t want her going otb. (Haha) Jess said she didn’t  understand why he didn’t  put her up since she was his target.

Pie wars continued but it’s getting old for some of them. Beth, Nick and Tommy were preparing for a performance and didn’t want hit with them anymore. Tommy didn’t want his hair messed up. (He really takes this sh*t seriously) I get it, it makes a mess and they’re tired of cleaning it up. So what? This is the same place that has people wear a costume for a week and it stinks by the time they get to take it off. It’s the same place Sis had to go lay eggs in the back yard. It’s the same place Tommy cut Nicks toenails on Nicole’s bed. I’m with BB17 Steve and he said they’re living in a house, in the middle of a parking lot. My point is, get over it. We’ve listened to you people whine, cry and brag on yourselves for 2 months. I want pies in the face!!

The house had dinner together and gave their grateful speeches. I don’t know what they said and I dont care. I CAN NOT handle the table banging anymore! My eardrums are more important to me than the things they “claim” they’re grateful for. Sorry, not sorry.

Kool, I mean, Beth & the Gang performed a dance and singing routine. She got the praise of how amazing it turned out. (It didn’t) 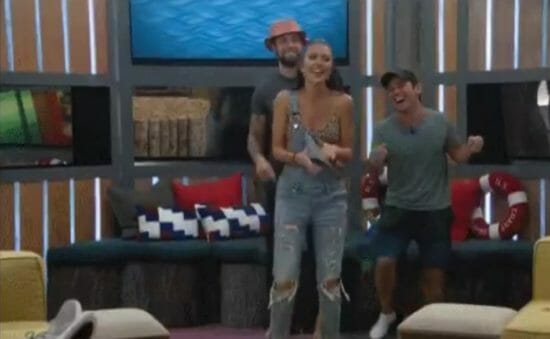 Nicole heard Tommy was mad about the pies. Christie said he wasn’t mad and was only joking.  She reversed it and said she was upset because he was upset but she was joking too. (I think?? I’m not sure anymore) They still got the house together to make some ground rules for the pie throwing. Cliff suggested they just do it over the trash can. Jackson said he was fine with it and thought it was fun. (He means it, he told Nicole that the pie war with her was one of his favorite days in the house. He told Beth the same thing when they were alone) When Nicole got him yesterday, she yelled “this is chess and not checkers” at him. 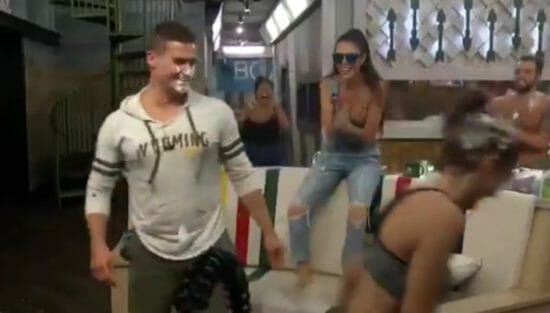 Christie checked with Jackson to see if she was still good. He said yes.

Nicole camera talked and said Nick leaving isn’t good for her game but she’ll have to go with the group on this one. (True and true)  That’s the game for yesterday. I said it wasn’t very much.

I’m expecting an uneventful Veto ceremony today but with this bunch, you never know.