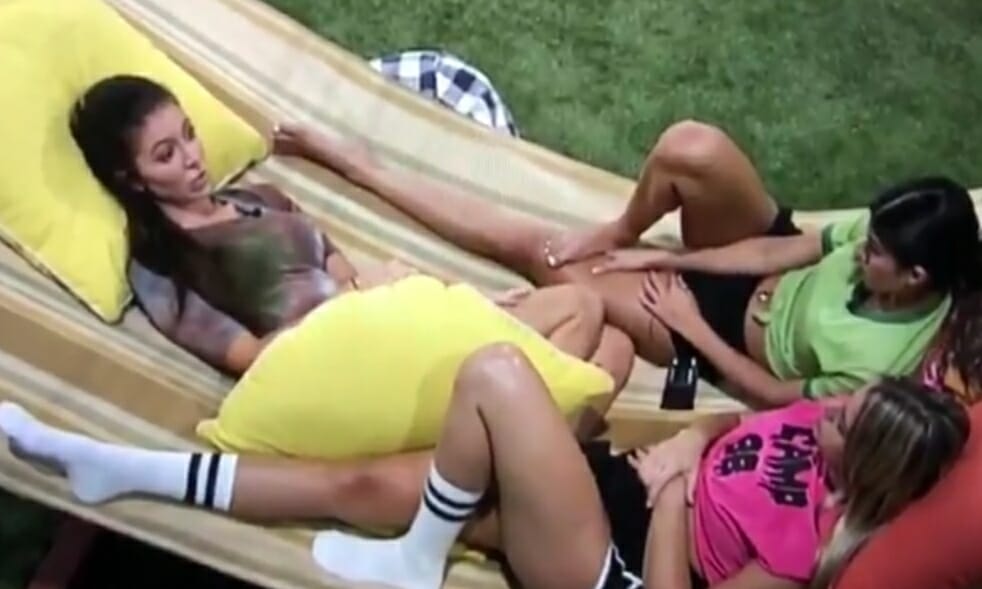 Good Monday morning. Yesterday was a bit of a strange day. If it had a theme, it would be about personal relationships and feed cuts. Even with the feeds cutting in and out, we heard some things we weren’t supposed to hear. Mondays are a little crazy for me at work so this is a good morning to recap with a list of things that happened without so much commentary from me. No muss, no fuss. “Just the facts, ma’am.”  I’ll try to channel Joe Friday this morning. I said “try.”

Nick and Kemi talked things out. They aren’t really in a better place but she got him to admit she kept what she said on the live show about the game and he and Bella made it personal afterwards. He said he was hurt over what she said and he did let it get personal.

We found out while Sam was voting on Thursday, Nick and Kemi did have words. I said I didn’t think they sat there quietly. Sam and Kemi were talking when this came up. I don’t know what Nick said but Kemi responded by saying “you can’t win shit anyway.” Jackson said “that’s karma” at some point and I don’t know if he said this after Nick won the hoh or not. In another convo, I thought Jackson had said that when Kemi fell down during her camp comeback uniform reveal. Either way, he’s an ass. Sam (talking about the other night) said he thought Kemi touched Bella first because Bella had said she was standing there with her hands behind her back. Kemi said it wasn’t true and Bella put her hands on Kemi first. (Kemi walked back to Bella and it looked to me Kemi had her hand up close to Bella but not touching her and Bella grabbed Kemis arm. When Sam got up to break it up, Bella put her hands behind her back and the look on Bellas face said she knew exactly what she’d just done. That’s my opinion anyway.)

Later, when Nick and Bella talked, Bella said she didn’t think she could accept it and forgive Kemi. Nick pointed out he and Bella did screw over Kemi. She said she couldn’t forgive Nicole either. (What Bella can’t really accept is that she doesn’t have anything to forgive them for. She made a big deal out of nothing and looks like a jerk. She’d rather stay mad so she doesn’t have to accept that either)

Christie found a lizard in the back yard. She talked baby talk to it until they caught it because she thought it needed saving and now she thinks she’s the lizard whisperer. She put it in a box and put it in the storage room for production to deal with.  To me, it only looked as if it needed saving from Christie. Eventually, it would have probably climbed back over the wall.

Cliff thinks Nicole put his game in danger so he’s trying to avoid her. (It wasn’t Nicole spilling their alliance to the cameras so I don’t know why he thinks Nicole hurt his game. If anything, it’s the reverse) Sam confided to Cliff that Jack, Jackson, Sis and Holly wanted him out so Cliff knows he can’t trust Jack to have his back like he’d kind of thought. Cliff also told Tommy what a good job he was doing in the game laying low and letting other people fight. Cliff just became a target for Tommy. Tommy was still planning on trying to get rid of Nicole this week even tho his alliance had decided on Cliff. I think that’s over. Tommy was going along with what Christie and Jack were saying but was making little comments to plant doubt about the plan. 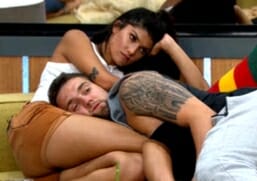 Later, Nick told sis he wouldn’t flirt with her anymore and they couldn’t cuddle. He said he didn’t want to upset Bella. He told her she was still his girl and Steve nailed the vibe of the conversation. Sis isn’t into Nick but she IS into being aggressive so her attitude did change a little afterward.

Sis wanted to go have an argument with Bella and call her out about the Nick situation. Jackson and Beth had to tell her it wasn’t smart since Bella is practically in power and has Nicks ear. Sis said she wants Nick to stay but get rid of Bella. Jackson is trying to convince her she can’t trust either one of them. Sis doesn’t want Nick but she DOES want Nick to continue to want her.

Jackson yelled at Kat last night and the feeds cut. Earlier, Kat told Holly and maybe other people about “dragging” Jackson in the DR. He lost his shit from what it sounds like. Jack and others commented on it and described it as “yelling” or “screaming.” She tried to tell him she was making jokes and it wasn’t that bad. There was also some talk about Jackson getting a warning for a penalty. (penalty nom, maybe?) Jackson talked about it the rest of the night the way he repeats EVERYTHING a bunch of times. He said he doesn’t like it when people won’t take responsibility for the things they’ve said and done. (We’ll wait and see if he continues that way of thinking when he leaves the house)

Jack was mad because he said “I made 1 rule people arn’t following it.” This was over catching people taking to the comeback hg’s and thinking they were talking game. (He really does think he’s the BB Boss)

Ovi told the camera if he comes back, he’ll try to go after Tommy, Christie and Jack.

David said he felt bad because he gets along with everyone in the house except Kemi. (They just don’t gel I guess. I really hadn’t noticed)

Kat’s been upset with Nicole because when Nicole was warning her about the big group picking off the smaller group, Nicole lumped Kat in with the smaller group. Kat feels she isn’t in the small group and it offended her. Kat NEVER takes off the veto necklace. I think she showered with it or she put it on the second she stepped out of the shower: 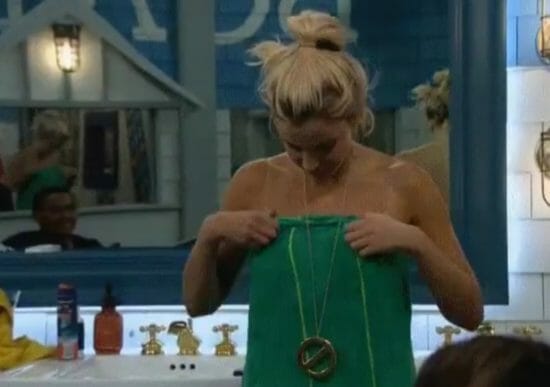 Holly told Jackson she loves Sis but she doesn’t do anything around the house. She said people get mad when Kemi doesn’t do dishes bit Sis has never done them and no one seems to care. They talked about her immaturity and making a big deal out of everything.

Sis and Beth discussed the guys being sexist. Sis said Jack only talks game with Tommy, Jackson and Christie. (Hey, as DaVonne would say “This is who you lay with?) Sis also said Nick is probably better than Jack for her game. (The Six Shooters want Nick and Bella gone. Is Sis gonna throw a wrench in the plan because she wants what Bella doesn’t want her to have?)

Kat and Beth talked after the Jackson blow up and confirmed they are still each others #1. They wish they could do dr’s together but are keeping their distance so people don’t realize they’re close.  Beth said “should we say hi to our real friends?”  Kat said she had her back inside the house and out. (I’m telling ya, I still think there’s something to the rumor about these two knowing each other) They both agree Kemi is an entitled b*tch and she doesn’t do dishes.

Not even 5 minutes after I typed the part about Beth and Kat knowing each other, Beth was talking to Christie about Kat. Christie was nervous over trusting Kat and Beth was trying to vouch for her. Beth told her that Kat could be trusted because they had a lot of mutual friends and if they turned on each other, it would look really bad. I think the comment went over Christie’s head but I’m not sure. My guess is,  they know each other a little but mostly know OF each other due to having mutual friends. They’ve both been energy drink models so I don’t know if there’s a connection with that or not. 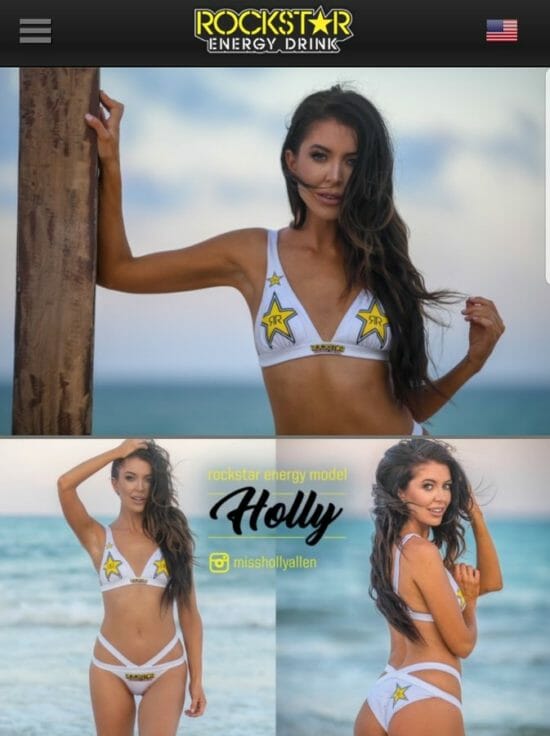 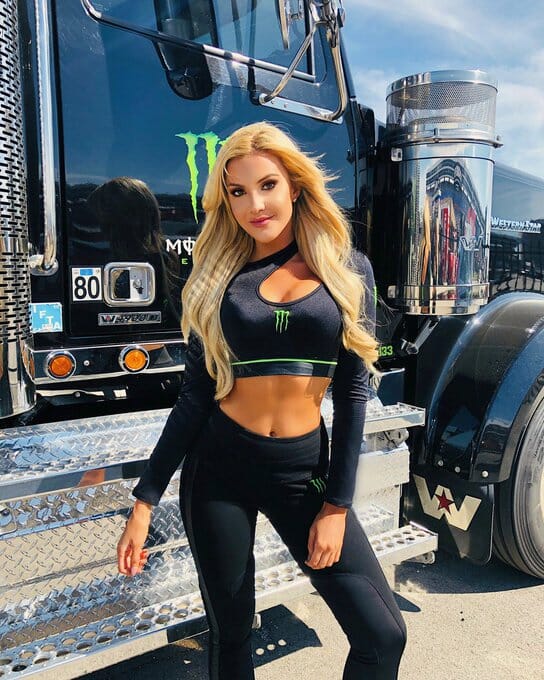 Jackson and Sis talked more about Kat. Jackson said she didn’t wear underwear or a bra and only wanted TV time and followers. He said she was disgusting and he didn’t want her doing or saying anything to hurt his reputation. That’s just a taste of the insults he throws out towards Kat.

Sorry, time to rant: Look, it’s on Kat if she slept with a guy the week she met him and got dumped on national TV. It’s on Jackson too AND so is moving on to another woman in the house. Kat has handled the situation as well as anyone could. She still hangs out with them, tells Beth to do whatever she wants with Jackson and how there’s no hard feelings. He gets mad at the jokes because he wants to erase the fact that it even happened. It isn’t Kats jokes he opposes, it’s that her jokes may make the show and he doesn’t want people to know he slept with her and dumped her for someone else immediately after. He bragged last week about being smart enough to end it before the live feeds came on so he wants to be in the clear. He’s too much of an idiot to realize he talked about it after the feeds were on and more than once. You wait and see, when fans don’t like him after the show, he’ll think it’s all Kats fault.

Tommy talked to Kat and has her flipped back to wanting Nick and Bella both gone. She still would like to have Cliff out over Nicole but she’ll go with the group. The plan,for now is to keep Nicole but not say anything until it happens or right before. Christie is still talking a little trash about Nicole to throw off Nick and Bella.

There’s more I wanted to include but I’m out of time this morning. It isn’t anything about game moves, just random bits of info tha can turn relevant later. I like to mention those things when I can so if you don’t have the feeds, you ar’t lost when something pops up, it seems out of nowhere, but really isn’t.  I’ll try to include them in the recap for tomorrow in a separate section or something. Sorry, like I said my Monday is apparently like Steve’s Sunday. Sorry in advance for what is probably a ton of typos but I gots to go…