Big Brother 21 – The Battle Of Sam 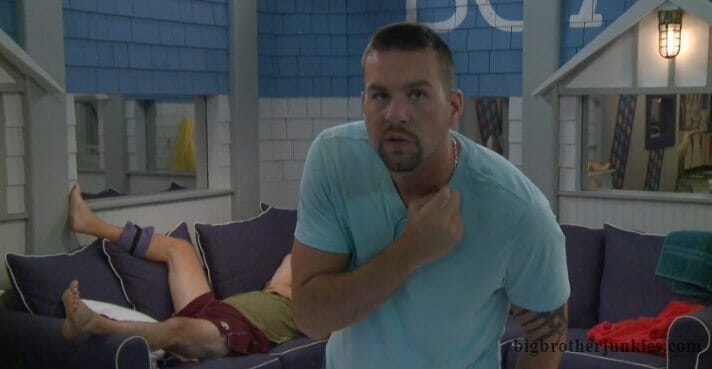 As I noted yesterday, I’ll be traveling today, but I’m going to wait until after the veto meeting so I can update the header and also know what’s going on in the house. I won’t be able to do a live feed update, but I’ll get a daily recap done tonight.

Things are beginning to become interesting in the Big Brother house because because what was once a sure bet of Sam or Nick going home suddenly took a 180 and now we may end up seeing Nicole go home simply because the 6 shooters are too scared to take shots at their own alliance and want to use Nick and Sam to do it. Kind of stupid move, but I’d expect nothing less from this batch of people.

This season would be like if BB20 replaced Level 6 with a bunch of really dumb people and FOUTTE ended up being the power in the house and in charge of everything. That’s how bad this “6 shooter” alliance is, and really the house in general. Let’s look at the weeks so far:

So, out of those 4 weeks, only one person from the original nominees has actually gone home. In week 3, Cliff was the original target and he was indeed saved by a twist, but for some reason, the house decided to stir up Nicole and make her feel threatened in the process.

Now we have a situation in week 5 where Nick and Sam were nominated. Nick saved himself with the veto and the house is actually trying to pull a week 3 again where Nicole may go up as a legitimate possibility to go home which will make her more pissed if she stays or still have an angry Sam if he stays.

A typical strategy in this game is to try to convince both people that they’re pawns and also convince the replacement nom that they’re a pawn if need be. This is because the people who don’t get evicted still believe they were a pawn and aren’t as bitter as if they were mentally prepared to go home. Sure, there is always going to be some resentment for being nominated, even as a pawn, but most people get over it once the game goes on and they understand that two people have to be nominated every week as part of the game.   Take week 4 for example: Jackson volunteered to be a pawn to get Bella out. Had Cliff found another pawn, nobody would be upset. However, Cliff took a shot by nominating Jack and Jackson together which pissed off that entire alliance. If not for the fact that Christie is currently controlling the house and wants him to stay, Cliff would have sealed his exit with that ridiculous move.

Personally, I’m rooting for Nicole to be the replacement nom today and have a repeat of week 3 just because this band of morons deserves nothing less. They’ll bounce back and forth all week on Sam vs Nicole and the person who stays will hold a grudge and hopefully win the next HoH.

I’m going to update this post when the veto ceremony is complete so we can see what these guys actually end up doing.

I don’t have time to stick around until after the meeting. There is like a 99% chance that Kat is going up as a pawn and Sam will go home. Boring. I updated the header and will fix it if I’m wrong