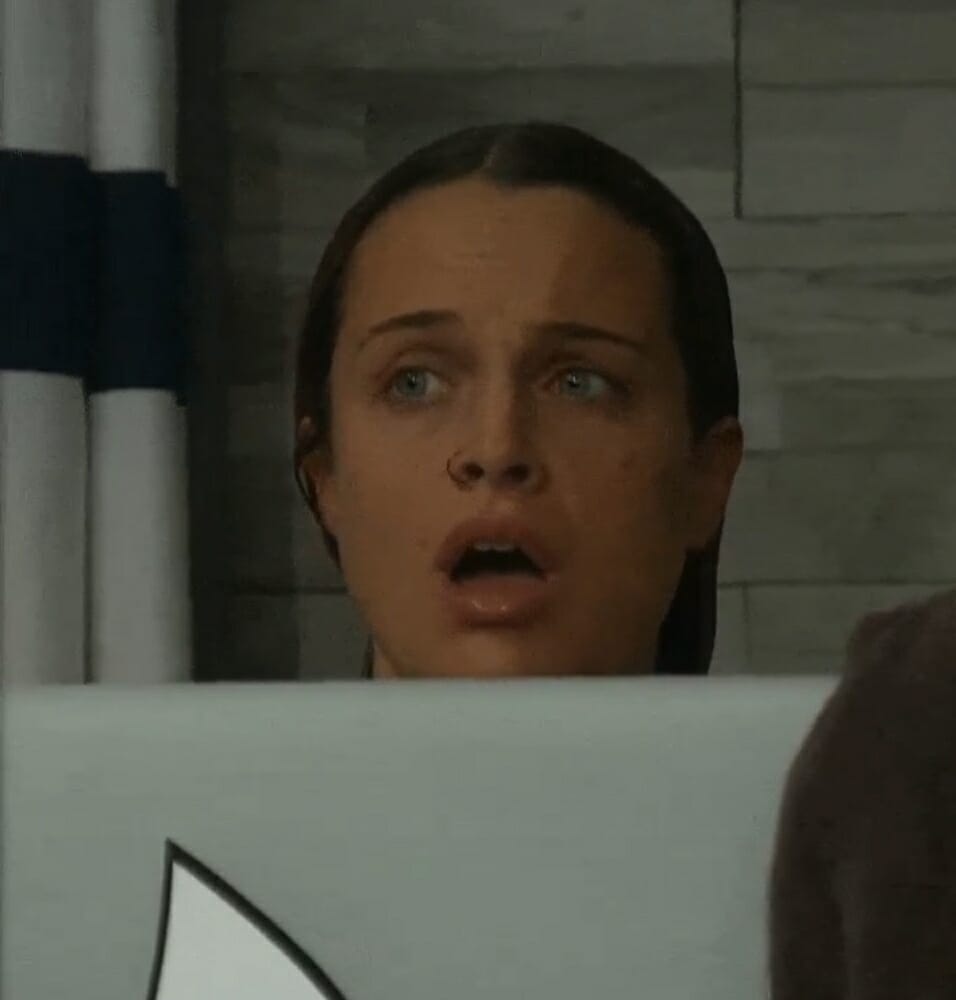 Good Friday morning BBJunkies. We’ve put another BB week in the books with only a few weeks left to go. I don’t  know if it’s  playing out the way you want but at this point, I’m just here for the ride. No one has a good enough game for me to care very much who wins. I was soooo relieved that last night wasn’t a reset. Why on earth would I want to do last week all over again? It may have been the most boring week so far this season.

Jackson, in spite of the odds, is the new hoh. I’m so sick of the shomance having the hoh room. If Nicole didn’t win, I was a little torn over what I’d hoped would happen, to be honest. I sort of wanted Christie to win so she could put up Jackson and Beth. Jolly feels like they’re in the middle of 2 pairs and has everyone fooled. They’ve talked about what amazing games they’re playing and can’t believe no one is coming after them. I guess they’ve forgotten who has been in power for weeks and that’s why no one has came after them. The shock of going otb together would’ve been great. I sort of wanted Tommy to win so he’d have to put them up and not be able to hide behind Christie anymore.

I ran across something yesterday and it seemed relevant because for whatever reason, my use of “Beth” has became an issue, even though most fans give most of the hg’s nicknames every year. (Hey, at least I don’t call her “Holly Allen, 24, Wyoming”) That’s her name for a lot of BB updaters. Beth made it into an article for the online O magazine: 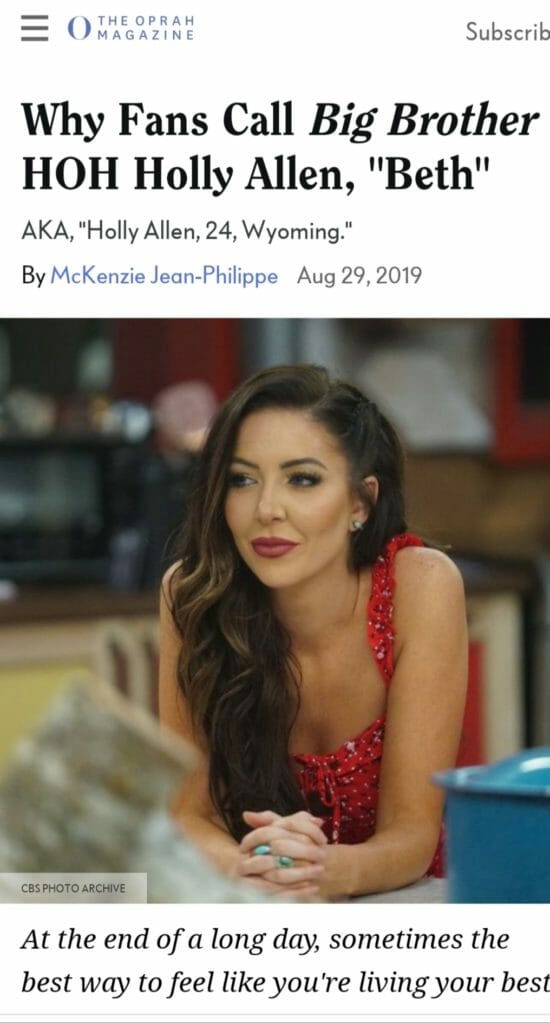 Here’s my theory: It isn’t a secret Beth is on BB because she’s living in LA and trying to “make it.” She wants publicity to help move her career goals along. (It’s the same reason half the cast is there) She’s as good of a player as the rest of them and actually playing better than most of them, but she hasn’t done anything to warrant an online magazine article. The fact that BB fans call her Beth and Holly Allen, 24 Wyoming is the entire reason she had the story written. I think she’d be happy with the cover image too because she looks absolutely beautiful. So…..I guess what I’m saying is ‘you’re welcome, Beth. Glad we could be of assistance.’ (You may not agree and it’s also possible that another theory works better: It could be, my recaps are being read by more of a Facebook crowd and unfortunately, my humor works better for more of a Twitter crowd)

Now, time for the random:

Steve will be very pleased about this:

No, not the fact that Julie looked lovely in her LBD. (although she did) He wasn’t very happy about skipping a double eviction.

I know Jackson said he likes this look on Beth but if she continues to walk around in nude clothing, especially with it in her butt crack, she’s asking for me to keep talking about her. It gets me every time for a second because she looks naked. Not so much in this one but I didn’t think to get the image until this moment and didn’t feel like going back for a different one. 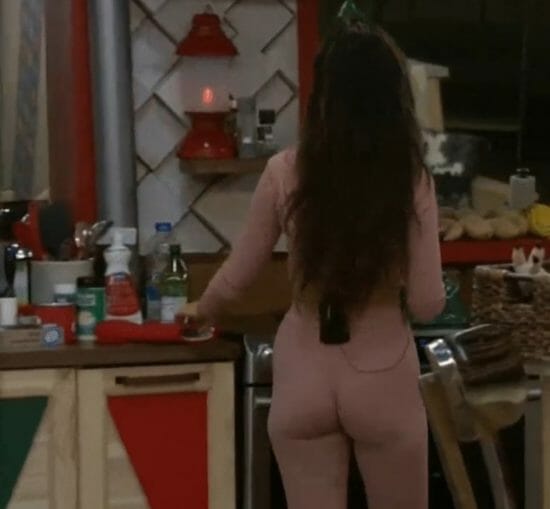 This is Jacksons dad who is some kind of musician. I don’t know if it’s his job or a hobby but Jackson said he played 7 instruments or something close to it and he has videos on YouTube. 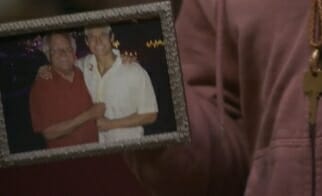 I’m sure the hg’s were wet and tired last night but you can’t help but think of the players who’ve stood in the rain for 7 or 8 hours. Like Dick or not, (for some, its not) he gave those comps everything he had: 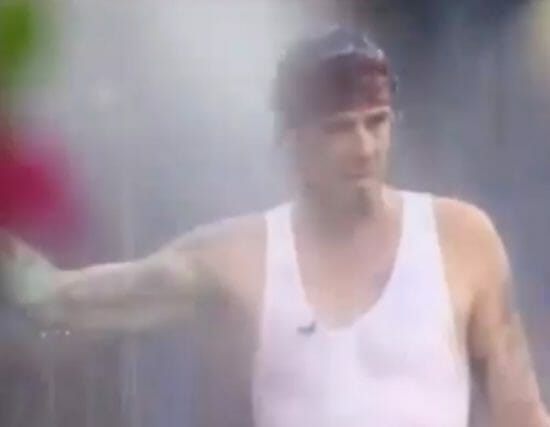 Nicole talked to Cliff about being worried that Jolly also have a F4 with Christie and Tommy. Cliff said he thinks they’d want to go with Cliff and Nicole because they should appear easier to beat. Cliff did eventually tell Jackson he isn’t as sold on the idea of Christie vs Jess and we’ll have to wait and see if it goes anywhere. I don’t think it will because Beth will probably continued to push for Tommy to be safe.

Tommy really wants Cliff or Nicole out this week. Christie said it won’t happen unless Tommy is the one who wins veto. She’s going to try to throw it to him if it’s possible. Tommy also thinks it will come out this week if Jolly is trying to play both duos. (I really like how 3 duos all think they’re playing the same game)

We’ll know for sure where Jacksons head is at later today when he makes the noms. It could change over the week and Cliff could tell him what Christie said to him the other day about targeting Jackson and Beth. Cliff shouldn’t say anything until after the veto anyway imo. Here’s another thing, even if it’s not what some of the fans want, it actually isn’t crazy for Jackson to target Jess. If Jess stays and Christie goes, Cliff, Nicole and Jess could be a 3. Jackson would still be a target but without Cliff  and Nicole on his side. Jess has proven she’s good in mental comps, that’s what’s coming up and she’s said she’d only put up guys. If Jess leaves, Cliff and Nicole have almost no choice whether or not to stick with Jolly. They don’t have anywhere to go.

I’m not giving Jackson credit for all of this because unless I hear otherwise, I don’t think he’s thinking this and don’t think it’s his reason for targeting Jess. I’d like to see Tommy otb but I also don’t think it’s crazy to keep him off either. If Christie and Tommy were otb, Christie is the one they should take out anyway (for their games) so why piss off Tommy before they have to do it?  Sure, we think Tommy will go after them anyway but he’s the main person in there who is getting paranoid about breaking his word to people. Even if it would be stupid, I could actually see a scenario where Tommy went after Cliff instead of Jackson because Tommy knows the end game comps are more mental and that’s Jacksons weakness. I still think he’d go after Jackson but if Tommy isn’t the target, why put him up if you have the votes to do what you want already?

There will be plenty of scenarios to go over soon enough as to what’s better for everyone left in the house. For now, check back later for noms and have a great Friday.