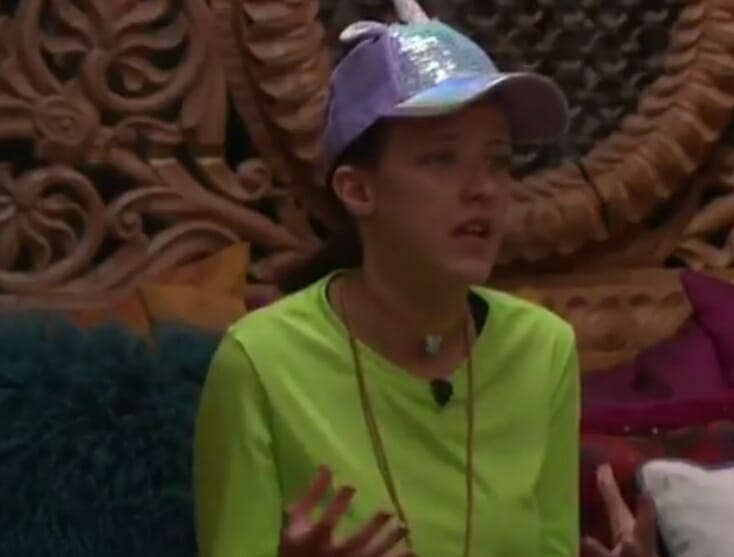 Good morning, I don’t know how you feel about last night but you have to admit, it was better than BB17 & BB18 James Hueling ruining everything right before the live shows. I was so torn watcthing the show.  I’ve leaned towards Tommy being the best one for Nicole and Cliff to take out (maybe not for Cliff but for the best odds in comps as a duo) but I really wanted Beth to be evicted.

Cliff and Nicole had a big decision and were too open with Beth and Jackson over not knowing who they’d evict. They needed to decide before they started running their mouths since you can’t unring that bell.  It isn’t as crucial as it would be with more people left in the game because if Cliff and Nicole are the F2, Jackson and Beth have to vote for one of them, even if they’re bitter. If one of them gets to F2 with Jackson or Beth, they arn’t getting the other ones vote anyway.  Christie’s Q & A from the jury house was concerning because from what she said, not splitting up the shomance could easily be seen as everyone playing Jacksons game. Nicole may have needed this move because it’s flashier for a jury. Even that didn’t matter as much because if Nicole made the move to take out Beth, it would mean Tommy would still be there.  If Tommy’s in F2, Christie votes for him, in spite of Nicole breaking up the shomance. If it’s Cliff and Nicole in the F2, she also has to vote for one of them. Seeing the comp for the hoh did cause me to think “uh oh, maybe they should’ve gotten rid of her.”  It’s the one type of comp that actually gave Beth good odds to win. (We didn’t know about any deal yet)  In the end, Tommy still needed to go. Sure, he would’ve been some help to fight for the upcoming veto but then what? If he gets to the F2, he wins this game. It’s not just Christie and her influence, (and she has a lot of it) the jury LOVES Tommy. Cliff and Nicole made mistakes but it wasn’t because they kept Beth, it’s because they let this week turn into a runaway train for a while. The downside, if Beth doesn’t keep her word to throw the veto, Jackson has more of a chance to stay this week. If Tommy stayed, they’d have harder competition next week. It’s the same thing, just a different week.

None of the reasoning I was using even mattered in the end because in order for Beth to stay, she offered to throw the hoh AND the veto. I’ll backtrack and go through this crazy day.

Before the live show:

We didn’t get to see very much of the feeds yesterday. I’m assuming once the blow up happened, production realized they had some good footage and decided to save it. It’s ridiculous because live feeders don’t need suspense and pay NOT to have it. (I won’t go off about that right now though) When the day began:

People were super pissed over what Jackson did and I said yesterday, if Nicole did what Jackson did, I’d think it was amazing game play. Cutthroat? Yes. Do I care? No. I don’t have to like Jackson to appreciate a good game move when I see it. I haven’t seen the house meeting yet to see how dirty it got but honestly, I doubt I’ll care. Sorry, but I’ve never pretended to cheer for bad players. I’ve said, since almost everyone this season is so dislikable, I found myself only rooting for people I like and that’s still true. Luckily, the people I like are playing the game too and everyone has made some big mistakes along the way. (See, if I don’t want to be a hypocrite, I WILL find myself a damn loophole!)

I went ahead and spent the afternoon thinking Tommy was out so I wasn’t super surprised. It wasn’t because I have the 3rd eye like BB20 Kaitlyn. It’s because I saw Tommy trying to defend himself before the feeds cut. He was stammering, pausing and looking for the words to fight for his game. It made sense to me but to Nicole and Cliff, it looked like someone who was lying.  You didn’t have to see the house meeting to figure out whether Tommy or Jackson was going to come out looking more believable. Jackson’s proven all summer he’s a great liar.  I’m not saying that as some kind of insult simply because I don’t like him. From the 1st week in the house, he’s had this ability to trash talk other hgs and a couple of minutes later, be in a room alone with them telling them how much he loves them. (Chritie has it too) He can turn it off and on very quickly and he’s convincing both ways. Of all the BB Comics, his Dr. Jeckyl and Michie Hyde fit the most.  Once he decided to go with the lie, he completely owned it.

Thoughts from the live show:

We knew the comps were being reversed since they did ‘What the Bleep’ as a veto last week when it’s usually an hoh. It wasn’t a surprise the hoh was going to be endurance though and this comp crossed my mind for a minute yesterday. I said to myself “nah, not enough people” so you don’t want me picking your lotto numbers for you. They’ve already done a similar comp with the Poison Ivy ropes, which Beth won and this comp seemed weird to me for only 3 people. During a commercial break, I tweeted out wondering whether Beth would win it before or after the episode ended. This seemed like her comp to win so in the moment….I’m bummed over the comp, the show ends, I switch over to feeds, ready with my snacks, annnnd….Cliffs out, Beth drops, Nicole wins!  WTH? It took longer to get the snacks!

Here’s the one thing I never understood about Jacksons lie. Why in the hell would Tommy go to Jackson and tell him his strategy to stay in the house? According to Jackson, Tommy was saying he wanted to stay and work with Jackson to take out Cliff. In order for this to happen, Beth would have to leave. What am I missing?

That’s all I’ve got for now but I’m sure Steve will be able to fill in more of the blanks as the day goes along. Have a great Friday.