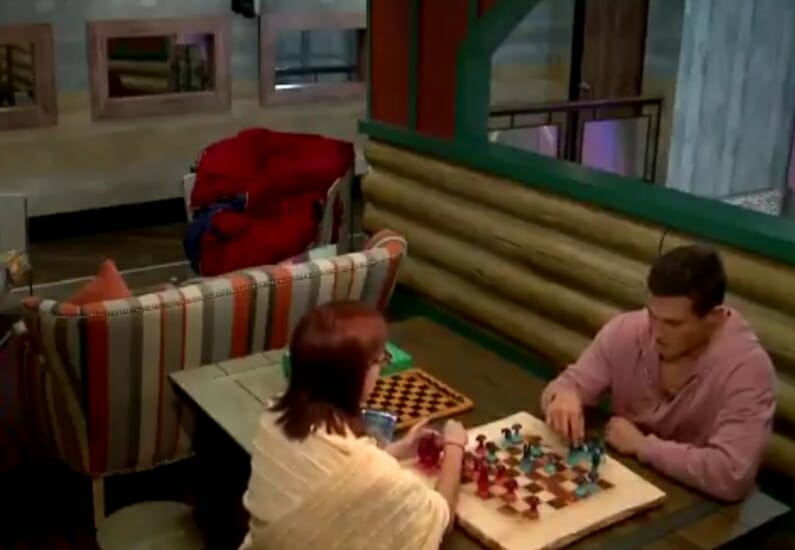 Good morning. We’re finally at the final 3 since Cliff was evicted last night. The end game feels like it’s taking forever this year! It probably always seems that way and I guess I forget from year to year. We’ll have a winner in 6 days so were almost there. I’ll warn you now, this recap will mostly include just a bunch of random stuff since there isn’t much to cover. I lost focus once I saw there wasn’t much on the feeds to cover and ended up all over the place.

My thoughts from the episode:

Voting for Americas Favorite Houseguest started last night. You have to vote on the website this time: www.CBS.com/bbvote. The site had a few issues last night but that’s nothing new. I’ll have to stay off Twitter from now until the finale because all the crazies come out and want to fight with you if you arn’t voting for whoever they’re campaigning for. (It’s nuts the way some people get riled up over giving 25k to someone they’ll probably never meet)  Truthfully, I’ve only voted a couple of seasons because I think they give it to whoever they want anyway. In case I’m wrong, this is one of the seasons I’m voting. Most of the cast was a huge dumpster fire in my opinion so it makes me want to vote. Originally, I wanted to vote for David, Ovi or Kemi because of how they were treated but they’ll never get enough votes to win so I’m going all in on Nicole. Along with everything else about her, I loved seeing her dance all season. She gives new meaning to the phrase ‘dance like no one’s watching.’ That alone, was enough to make her my favorite. As for everyone else, they’re your votes, use them however the hell you want. 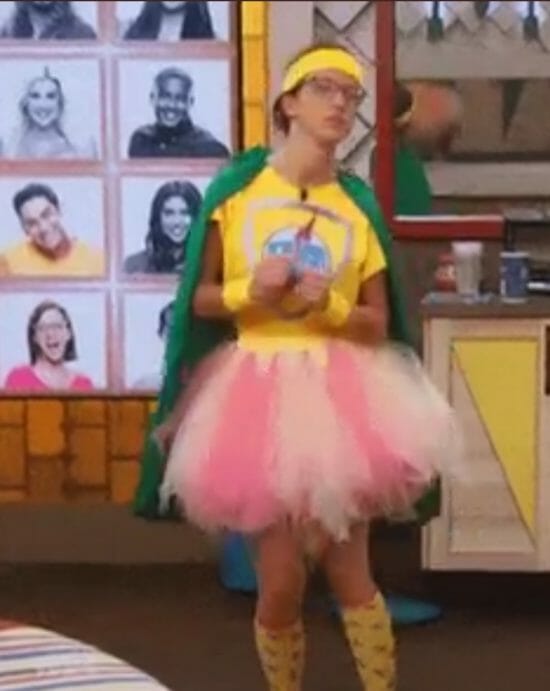 Sam is out in full force campaigning for himself. He was selling t-shirts with his picture on them and the words “Send It!” Maybe he hasn’t sold enough to get that pool he talked about because he’s working for AFH or AFP, whatever they’re calling it ths year. 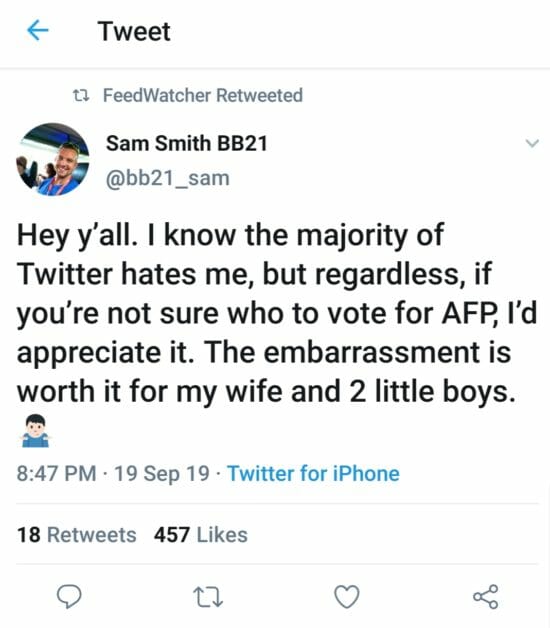 Sam has spoken about being a FB user but is new to Twitter. He’s learned the hard way that although they’re both social media, they’re  basically two different planets. Sam is funny and he seems like a great guy. He just doesn’t have a clue what happened during his season, while he was in the house or after he left.

I don’t known if Dr. Will is doing the jury discussion this year because there’s been some talk about people who’d like to do it. Jessica from BB19 posted something about wanting to do it. (I didn’t see it but it had some people in an uproar) I don’t blame them because what can she contribute? She had a power she told Paul she had and when she was able to make a big move, she took out Ramses. I hope she stays busy spending that Amazing Race money and stays away from the jury. I saw another Tweet that I CAN get on board with though. It’s a travesty if production sees this and ignores it. Will may have been a great player but he doesn’t even watch the show. Danielle does follow the show and she’s pretty much amazing too. 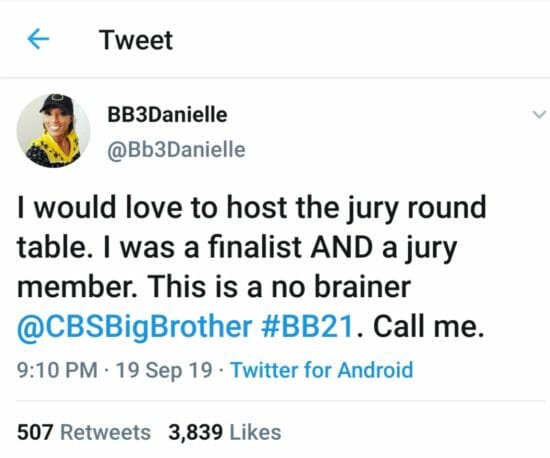 I mentioned the way the final 3 comps are traditionally set up. They’ve already veered away from that this season so we don’t know how the rest will play out. The comp they did last night (part 1)  is usually endurance but this one sounds closer to what part 2 is usually like. If so, will part 2 be the endurance? Will they skip endurance since that’s what they did for the final 4 hoh comp? This could make a huge difference in what kind of chance Nicole may have in part 2. Maybe Jackson didn’t screw up by fighting for part 1 last night. We probably won’t know until sometime tomorrow because that’s usually when they do part 2.

I don’t mind production changing up the comps. It’s harder to plan when the hgs really have to “expect the unexpected.” It’s become predictable and sometimes, it’s hard to get players to play the game from week to week. How many times have we seen players doing nothing because they were waiting for the double to make a move and…..they could guess exactly when it would happen?

What I don’t like is seeing how physical the comps are becoming. It used to be an even mix but if last season and this season are any indication, we’re entering into a different kind of BB. Cliff wasn’t wrong last night when he told Julie, he figured there would be more mental comps towards the end and be able to take out Jackson, if someone hadn’t already done it. I’ve lost count of how many physical comps they’ve had in the second half of this season. Even the last veto comp was ridiculously physical which followed and endurance for hoh. Yes, they had to answer questions but there were only 3 of them and they were super easy ones. The hardest part of that comp was running all over the yard to retrieve your balls and having the strength to easily pull back the slingshot. This was a comp made for an athletic person. The fact that Nicole was only a few minutes behind him proves it was mostly physical. He had trouble with the questions and she didn’t, so if she did so much better, why did he win? She couldn’t compete against him with the athletic part of the comp.

BB keeps evolving and the players will have to adapt. There was a time “jury management” wasn’t a discussion because the game didn’t revolve around avoiding hurting someones feelings. Now, it’s a huge factor in winning the game. If they continue down this path for the style of comps, strategies will need to change with it. They days of keeping some big targets in the house to use as a shield and help you win comps may need to end. You’ll see people start to target the most athletic people first because they’ll be too afraid they can’t get them out later. It’s nice to see the hgs who practice and study get rewarded too and we’ll lose that if they continue to do less mental comps.

Hopefully, we’ll have a better idea on Saturday what the F2 could be looking like but I’m only guessing. Is it too biased to hope part 2 is a unicorn drawing comp or naming all the charms in the Lucky Charms cereal? How about seeing how many streets you can name in Long Island?  Have a great Friday and a lovely weekend.