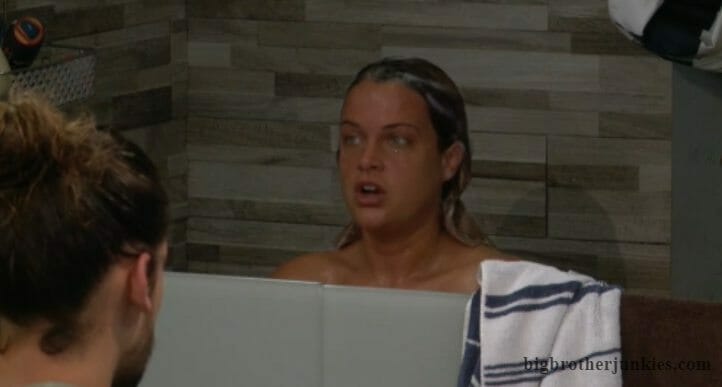 It’s Wednesday in the Big Brother house which means the last full day of campaigning for both Jack and Jackson. Well, mostly for Jack. He knows he’s in rough shape right now and is desperately trying to flip votes. He still hasn’t enacted ‘plan blackmail’ where he’s going to threat Kat that he’ll expose her game unless she votes for him. I am anxiously awaiting this to see just how much she laughs at him. He has two things on her. First, she played as a mole for their alliance early in the season. Second, she knew about the flip vote that got Cliff out.

The big thing with that is – nobody will really care. Kat has been friends with Jess so she may be a little hurt, but that’s about it. All these ‘evil’ things Kat did were early in the game when she was on her own so the chances of Nicole, Jess, or Cliff even blinking an eye at learning about that stuff is slim to none. I actually really hope Kat calls Jack on that bluff and we get to see what happens when he reveals it to the house and nobody cares.

Tonight on CBS is the veto episode, so I know a lot of people are tuning in after that to find out what they think will happen tomorrow night. Here is what to expect:

Jack is going to jury

Not much else to it. Nick may or may not create a tie, but in the event of a tie, Jess is voting out Jack. When you watch tomorrow night, here is how the votes should go:

If Christie, Sis, or Tommy vote Jack, they’re voting with the house and he’s gone. If Nick votes Jack out, he’s gone. However, if Holly, Kat, Nicole, or Cliff vote out Jackson, Jack will stay. So you’ll know the result based on the first few votes tomorrow night.

Before I begin the updates tonight, I want to say thank you to everyone who has donated this season. It really helps keep the site running as this beast is quite expensive per month. I squirrel away donations for the winter to pay those big fees. If you’d like to donate, here is the link.

They then go into the bedroom to talk some more. Updates on this shortly.

Meanwhile, get a room: 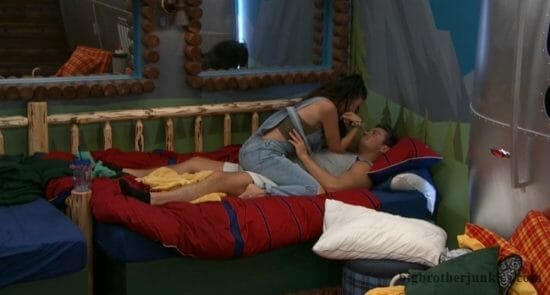 2:20 pm – Jess is talking to Nicole. They aren’t sure who they want to go home but they know that Jack will come after them where Jackson is still up in the air so they’re going to keep Jackson but they’re not confident about it .

Nicole knows that after this week, that 6 is going to try to reform and become an alliance once again likely with Nick. She is very aware of her surroundings. Her awareness of the house has dramatically improved since that rogue vote opened her eyes to the alliance.

Apparently, Jack is going to try his blackmail attempt after dinner. Fun times.

We’re still on Blackmail Watch and Jack has yet to come to Kat about his ridiculous proposal. Do it, Jack!

They continue talking about the future. They hope that Holly and Jackson are on their side but don’t expect it and don’t tell them anything important. Basically use them to keep getting out Tommy, Christie, etc.

Meanwhile, downstairs, frick and frack are sitting here happy because Cliff convinced Jack that he’d work with them.  (pretty sure Cliff was humoring Jack) 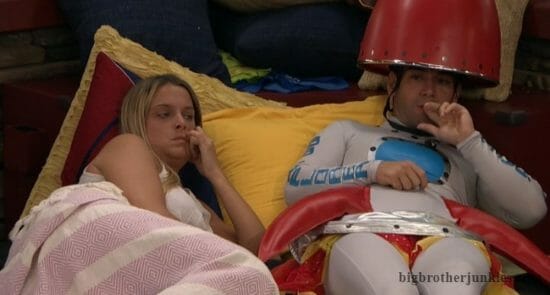 In the other room, Nick is still convincing Jackson and Holly he’s voting with them.

5:30 pm – Frick and Frack are still talking when Jack comes in to join the conversation.

Tommy leaves and of course he ‘loves you guys’. Stop saying you love everyone. Hate that. (minor rant)

Jack tells Christie he’d die for her. She says ‘ditto’. Not exactly the reply I’d want from something so serious.  “I love you”, “ditto”

Sounds like he’s going to use the Kat blackmail as last-minute if Cliff doesn’t fall through.

8:00 pm – Cliff is re-telling the old conversation with Jack. He wants to tell Kat about it to prepare for it. Nick says ‘they’re going to know it’s you and they’ll target you’

Cliff says he doesn’t care that Kat was working with them. That was when they were all kind of floating and working alone. Jack enters.

They talk a little about it and then Cliff leaves. Jack tells Nick it may have been a mistake to tell Cliff about it. Nick says he doesn’t think Cliff will say anything but he (Jack) may want to tell Kat before it gets back to her. Nick tells him that Jack will be back anyway from battle back they think is happening.

Jack says he’s going to give a general campaign to Kat and trust Cliff not to say anything.

Closing this. Overnight thread is here