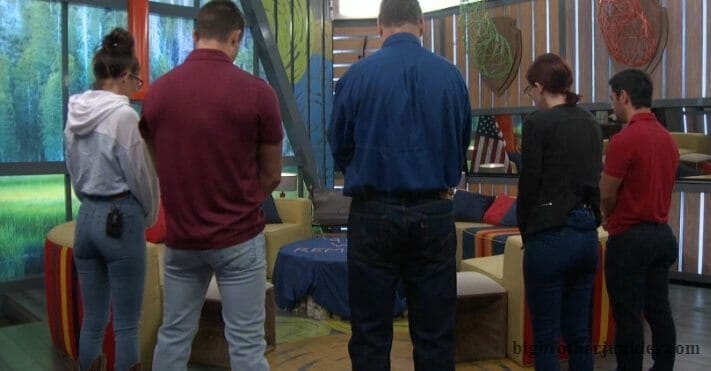 First, I want to take a moment to recognize the lives lost 18 years ago today. I don’t know if I can add to any of the beautiful words that have been said about this tragedy, so I’ll just say the one thing that always touched me was the night before. Every Sept 10th, you often see people talk about how x years ago people were saying goodnight to their loved ones not realizing what would happen the next day. That is always a powerful message because it really rings true on any day. You never know when the last time you said ‘bye’ will really be the last time so just never take it for granted.  I won’t be preachy, I just wanted to say that.

Alright, on to Big Brother…

This morning I woke up earlier than normal and was sitting at my computer like normal when the feeds cut to fish. That is because Cliff requested to be woken up early around the time of the planes hitting the WTC so he can pay respect. They actually did it and supplied a large American flag for them to display. Everyone woke up around 6:30 am and got fully dressed and went into the living room to reflect on the event. I thought it was a beautiful tribute and easily one of the best I’ve seen since blogging this show. Thank you for doing this, Cliff.

On to the actual game part of Big Brother…

Tommy plans to reveal his secret to Nicole and Cliff today which is about as dumb as when he revealed it to Jackson and Holly. Well, probably a little less dumb because he already let the cat out of the bag so by hiding it from half the house makes it look worse. It was dumb to reveal it at all but I guess it makes sense to tell those two about it in the event that Holly or Jackson beat him to it and makes him look sneaky. It may swing the vote back into Holly’s favor but he may as well go all-in on being ‘Honest Tommy’ moving forward.

I’ll update this thread because I do expect some campaigning. I am not sure what will actually happen, and it will probably happen later tonight, but I want to keep this open in the event this group does something other than sit around and sing all day.

I see that Tommy did his reveal to Cliff and Nicole. Like I said, he didn’t have much choice now that he spilled it to begin with (which was the original mistake).

In a conversation later, Jackson points out how Christie was able to flip the house multiple times and she will easily flip the jury for Tommy

Holly is currently campaigning to Nicole and continues hard to try to cry but no tears are actually coming out. Kind of awkward.

Oh, and not many high traffic nights left to make sure many see this – Thank you a ton for donations this season!

Holly begins tearless crying again to Nicole saying how she just can’t leave 5th. She’d happily take 4th. Why? Does anyone fall for that? No, you want to extend your stay. You won’t happily take 4th any more than you’ll happily take 5th. Don’t lie. Just focus on reasons why it’s better to keep you over Tommy

6:15 pm – Jackson asks Tommy how it went with Cliff and Nicole. Tommy said ‘good’ then says ‘oh I didn’t tell you. Remember when there was an incident in the back yard’… feeds cut. This is referring to when the guy with the megaphone blurted out Christie and Tommy’s secret but only he and Cliff heard it. Cliff clearly didn’t tell anyone for some reason

Holly is now going to campaign to Cliff

6:30 pm – In talking to Holly, Cliff mentions how weird it was that Tommy revealed that. How little he had to gain from that. Cliff can see it. It was a stupid move. Holly then points out how that also made her upset at him thinking back to the big blowup fight that he instigated about Holly and Kat knowing each other outside the house. She says that was hypocritical of him and he’ll talk to him outside the house

It’s good to see Holly finally throwing Tommy under the bus a little. It’s about time someone did. They have been babying him all season

Holly continues … She wants to just be an inspiration to girls and doesn’t care about the money. She says if she is backdoored on Jackson’s HoH, it will taint her entire BB experience.

This whole conversation is all about Holly. She’s made few little effort in convincing Cliff as to why he needs to keep her over Tommy. Her legacy, top 4 is good, blah blah. This is embarrassing how Holly made final 5 and someone like Christie is in jury