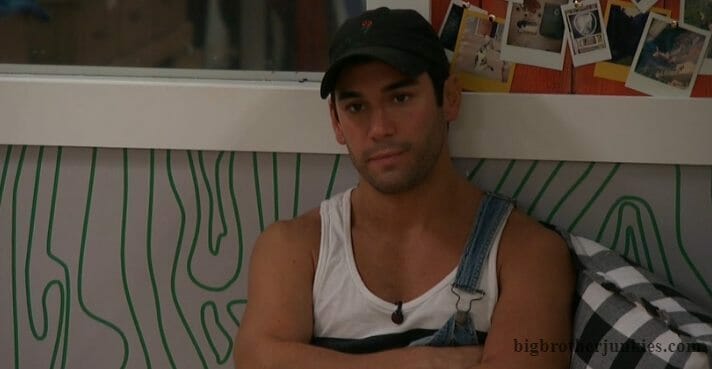 Whew, okay. Let me try to recap tonight a little.

Sam has been going around the house telling the story about how Christie was fine with Jack and Jackson going on the block and said she could get house support. This was going to be what he put in his speech I guess, but decided he didn’t want to blow up Christie’s game. Instead, he proceeds to try to do just that by telling nearly everyone on an individual basis. His strategy behind it was to somehow prove he’s loyal and it would make people want to keep him. Needless to say, it wasn’t Dan’s Funeral type of strategy. Sam is not a good player and people have been running around telling him he’s amazing and that’s why he’s going home. The only thing he has going for him is his ability to be well-liked by the house. In that regard, he’d almost certain beat almost anyone in the house, but they’re telling him he’s amazing because … well, may as well. Make him feel better about leaving?

Moving on… Sam doesn’t tell Tommy about this whole thing but Jack decides to for more reasons unknown. Holly and Jackson begin to panic when they found out Tommy was chatting with Sis and Jack, so he ran away and got Jack alone. He asked him if he told Tommy and Jack said no. Jack then continues on to basically say he did tell him but didn’t give him ALL the details and it was only a test to check Tommy’s loyalty. Jackson was like … ohh, good strategy and felt good about it.

When Jackson re-tells Jack’s excuse to Holly, she immediately tells him that they already know those two are working together. This was not some mystery that needed to be cracked. Jackson reassured her it’s all okay and the big thing is that he wants to be Mr Hero and make sure good guy Sam leaves with his head held high tomorrow. They’re all keeping the secret from Christie for Sam’s family. So sweet. Maybe voting to keep him would be better for Sam’s family, but what do I know?

Tommy, realizing that he needs to confront the issue, pulls Sam aside and they talk for a long time. Tommy does a lot of damage control by downplaying those old events. They continue talking and Sam decides he wants to just have a confessional session with Tommy and starts telling him his whole game and how he had issues with trusting Christie and things like that. It was really weird and just overall stupid but that was just Sam’s amazing gameplay. Tommy then tells Sam that he thinks Jackson, Holly, and Kat know each other outside the house (or he thinks they do) which is a nice cover for him and Christie deflection. Sam says ‘well, that’s more than enough reason to keep me’ which actually does make sense but won’t matter because he’s gone tomorrow.

Just a weird night, but here is your summary: