Good morning BBJ gang! Yesterday was quite a surprise. I knew Christie would campaign but after Taco Tueaday, I didn’t think she had anything left to pull out of her manifesting bag of tricks. I was wrong about that one. (I was right about her path to staying going through Beth) I’d guessed more of it would hinge on Jess, rather than Cliff, when I talked about it yesterday so I was wrong about that too.  I probably should’ve factored Cliff into it more since I was aware he and Nicole had already had a discussion about hating to send Christie home over Sis. I didn’t, so I obviously don’t need to go the Vegas this week.

Except for the campaigning and a cereal party, the night was basically more of the same. The day can mostly be summed up by saying, Christie’s trying to stay, there’s a really good chance it’s going to happen, Tommy played a little behind all day and people think Nicole is wishy washy.

Here’s a condensed version of the day:

Everyone tried out Tommys “botox face” during the cereal party and this was Jacksons attempt: 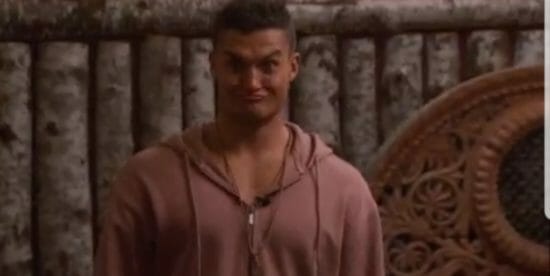 This is a guessing game right now, for us and for them. Honestly, I don’t think any of us can judge most of them too harshly for these game decisions because things simply aren’t that clear cut right now. (We can still judge them on being a**holes so we do have that) Not only are the players unpredictable this year, there’s more than one path for many of them to take. Yesterdays enemy could be todays new alliance member. Christie will be harder to get out than Sis down the road but because of the strong bonds and pairings this season, it makes ‘the right move’ a bit more tricky.

Naturally, Jackson should want Christie out because he clearly named her as his target. However, he’s a strong competitor and in a shomance so he needs big targets in the game.  If he wanted to go this direction, he should’ve done it from the beginning but it took the blow up between Nick and Christie for this to become an option for him.  I still see him as the person with the most to lose if they keep Christie. He’s  putting too much faith in Christie’s “mental abilities.” Cliff and Nicole aren’t really loyal to him, despite what they say but he isn’t loyal to them either so IF Christie stays loyal, it could work out….for now.

Beth is in a similar situation and she dropped hints all week about wanting Sis or Nick out.  She knows she could easily go otb with a Nick HOH, so if they were going to do this, she should’ve pushed harder to get Nick put up from the start.  Beth’s had a hang up with Sis for a long time and even though she was worried about Nick, she was too focused on Sis. (It’s a personal issue for her with Sis and that alone, makes it a bad game move. Remember way back when Beth and Kat complained about being jealous of the attention Sis was getting? It’s the reason Beth talks about beating Sis in every comp so much and says Sis is bitter because her shomance is gone. Those are two things Beth has done better than Sis)

It boils down to this: If Christie sticks with Jackson and Beth for a while, it wouldn’t be a bad decision to keep her. If she’s just saying what they need to hear and turns on them, they should’ve sent her home. Unfortunately, whether keeping Christie is a good or bad move will be sort of results oriented.  I don’t like evaluating a player’s game based on that because it’s the same as saying “well, it worked out, so obviously it was a good move.” It’s like Cliff and his decision to make a deal with Christie rather than make her use the power. It was a smart decision because he’s still there and more importantly, his word is gold to people. Should he have made Christie use the power? Yes, he should’ve but we can say no at this point because his gamble paid off.

Nick certainly needs Christie to leave, Tommy can benefit from either scenario and I think this could actually be good for Cliff and Nicole.  It could also be terrible for them depending on who backstabs who….so I’m really going out on a limb with predictions, huh? (This house simply has too much movement right now for anyone to know how it could play out imo)

I know many people are irritated that Christie could stay and I doubt I’m going to change anyone’s mind so I’m going to toss out some ‘glass is half full’ thoughts instead:

Here are some other thing I don’t mind:

I’m ready for all of them to go so I’m not picky about the order.  Some of you are dead set on Christie leaving tonight and I can respect your feelings about her.  I’m just saying, even a shit storm can sometimes grow flowers once it ends.  For me, good feeds can be defined by my blood pressure.  I may be very excited or I may be very angry but at least I’m feeling something other than boredom.

Take care, ‘see you’ tonight and have a great Thursday!