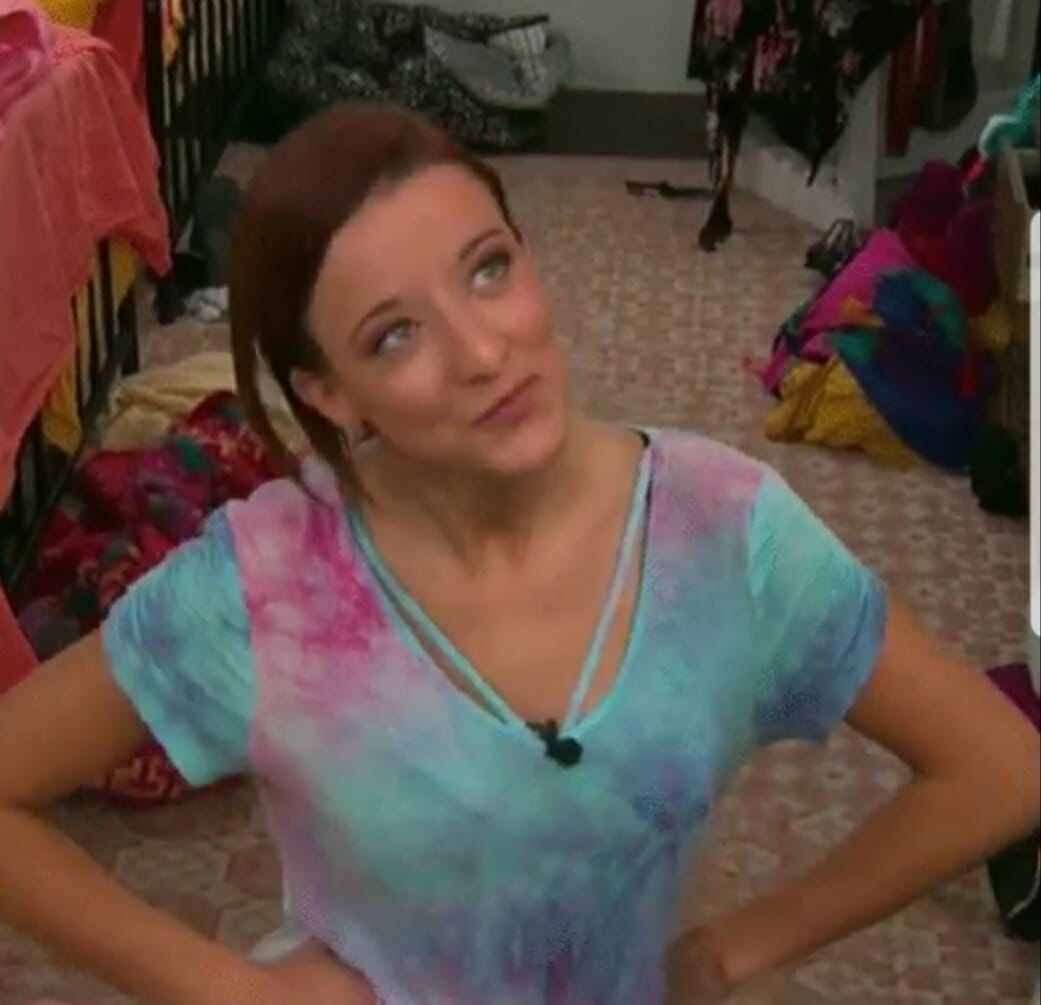 Good morning everybody, yesterday was like watching the house when there’s only 3 or 4 people left in the game. Nick is not the person I’d ever guess to be the one to leave quietly. I think a lot of it is the way they campaign, not just Nick. This year, they campaign as if they’re booking appointments but only until they’re off the clock. Nick especially, doesn’t understand it’s about the relationships leading up to “campaign day” that are important, not the campaign by itself.

Christie wasn’t even planning on campaigning because she feels so confident but once Nick began, she felt like she should at least make a show of it. No ones minds have been changed and unless America is being pranked too with a reset week, Nick and his metal bowl will be leaving tonight.

I’ve gone back and forth over what I think would happen regarding a reset. I don’t think they’ll do it because Julie didn’t hint at it and I don’t see them having the fans vote on something that would be voided in the end. On the other hand, it would fit the prank theme this week and allow for a double eviction. A third hand, if I had one, would be to slow down the end game, not have a quick mid week eviction when they reach 4 or 5, and they could still have the double and send someone to jury tonight. Either way, we’ll know soon enough.

Here’s the rundown of what happend yesterday:

Jess gave Nicole a makeover. Actually, Christie helped too and they used some of Beths makeup so they all had a hand in it. 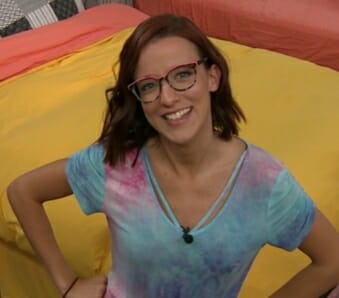 She looked great and Jess didn’t go crazy with it so Nicole didn’t look overdone. Nicole is a cutie anyway, with or without makeup.

Nick practiced his campaign with Nicole before he approached everyone else. 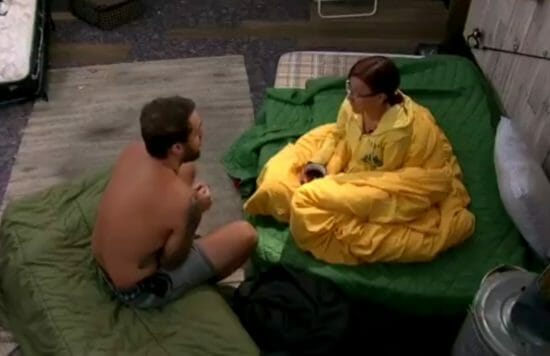 Nick campaigned to everyone. Tommy kept trying to steer Nick in the wrong direction to help Christie just like he tried to find out in advance what Nick’s campaign would be in order to tell Christie. When Nick spoke to Cliff, part of his proof of loyalty to Cliff, included the example of when he put Cliff on the block, he said he didn’t want Cliff to go home. (???)

Nick used a condom for a prop when he pitched Beth and Jackson. This sounded insane to me when he first said it. Surprisingly, it wasn’t terrible. He was trying to tell them that he would be their protection, be loyal to them but didn’t expect loyalty in return and they could dispose of him when they wanted. (It was funny and he knew his audience, I suppose) The more he talked, the worse it became and by the end, I was back to thinking it was terrible. They weren’t ever going to keep him and I was only evaluating the pitch itself. During his speech, the condom broke and that should have told him something. 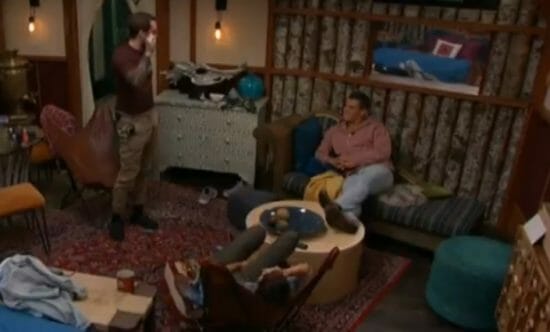 Christie campaigned by hinting at a F3 with just about everyone. She spelled out to Cliff that Jackson and Beth would be her targets and the deal she made with them was over. She asked him not to tell them. There was a lot of speculation online if Cliff would tell or not. I think he will at some point but not to save Nick. Too many people are lumping Cliff and Nicoles games together. Yes, they’re working together but what’s good for Nicoles game isn’t necessarily what’s good for Cliffs. He needs Nick to leave and he isn’t disloyal to Nicole because he’s trying to help make it happen.

With Nick gone, there are 3 defined pairs in the house. Every pair thinks they are (or wants to be) the pair in the middle. Nick messes that plan up for Cliff. Nick is another path for Nicole to get to the end that’s being shut off tonight so it makes sense for her to want him to stay.

Nick still hangs out and goofs off withTommy but the trust is over….unless he stayed and then, he’d probably go right back. 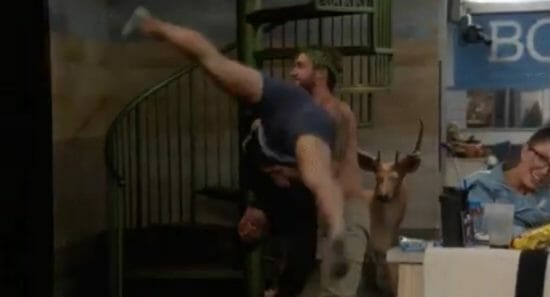 Beth is a little bothered by the attention Jackson gives Nicole. He treats her like a little sister so I thinks she’s jealous of the attention in general, not the kind of attention.  Beth, once again, told Jackson she thinks Nicole is a little manipulative. (She may be, I’ve never thought her good heart and feeling so bad for the person going home was 100% sincere. She does seem to be a sweet person but I actually hope some of it’s an act. I’ll be more impressed with her if she’s milking it a little) Jackson complimented Nicoles makeup yesterday and said he’d jump in front of a pie for her if she had to pie herself. Beth said “wow, that’s the power of make up. I have make up on a lot and he’s never offered to jump in front of a pie for me.”  Jackson also made an earlier comment (to other people, not Beth) about not knowing if they’d be together after the show because he thought Beth might be too much of the jealous type. (This won’t turn into Jeff & Jordan folks)

Cliff and Nicole talked about how Nick was going to be voted out by Jess, Jackson and Tommy anyway so they may as well vote him out too. She asked if the should tell Jackson and Beth what Christie said about going after them and Cliff didn’t think they should. (It’s risky if it’s too soon)

Jess spoke with Nicole about the pros and cons of sympathy votes. Short version: It was ok for Jess to give Kat one but she doesn’t think Nicole should do it for Nick. Jess’ situation was different. (???)

Jess had an attitude with production last night for some reason. She suggested everyone sleep naked and on top of the covers so production couldn’t use the footage. When Nicole said the thought of people writing down what she said creeped her out, (hi Nicole) Jess called us (feed watchers, updates, bloggers, etc.) insane. I suppose it would be insane and creepy if I did this to my neighbor but my neighbor didn’t agree to be locked in a house, filmed 24/7 and have a chance to make 500k in 3 months. I’ve noticed a lot of talk about production this year, which we always hear, but I can’t  remember it being so negative before. I’m not saying Jess was all that negative because she wasn’t. I’m basing it off a lot of comments by a lolt of people. This conversation just made me think of it.

Nicole and Beth talked about the vote too. Nicole seemed to talk without making much sense (to me at least) and she reminded me of listening to Jess. It sounded like she isn’t planning to give Nick a vote to stay, Beth doesn’t mind if she does, maybe she will give him a sympathy vote, Beth won’t hold it against her, Nicole thinks Christie may try to use it against her later if she does and Nicole FINALLY gave Beth the assurance she’s been looking for. Nicole said she was completely on board with Beth, Jackson and Cliff and said this week didn’t change anything. She also told Beth that Christie insinuated she’d be going after Beth and Jackson, in spite of Cliff thinking they shouldn’t. (See, they arn’t playing as one person. Cliff and Nicole have different agendas, to an extent)

Nicole told Nick it wasn’t looking good for him and he’d probably be going home. He was bummed out and confused. He doesn’t understand why anyone would want to keep Christie, who he says is a liar. (Nick won’t ever understand saying you’re loyal isn’t the same things as being trusted because you’ve built game relationships with people. He’s still probably shocked the condom pitch didn’t work. He should get points for creativity and then he should be sent to jury) Nick said he thinks his biggest flaw in his game was being loyal to people and expecting that loyalty in return.

I talked about Cliff and Nicole yesterday so here’s a few thoughts on Tommy:

He seems a bit lost to me at the moment. Maybe I’m reading him wrong but his plans have been ruined and he’s having to make new ones. Not only had he accepted he was losing Christie last week before the flip, I think he was looking forward to it. The advantage he and Christie have is unfair but we have to remember, he didn’t ask for it or know it was going to happen.He might have been fine going to the end with Christie at first but when people began saying she was a threat, that probably changed. (We’ll never know because when he’s asked after the show, he may want to seem loyal to the people back home. He may say he was always with her, even if it isn’t true)  I think his plan for a while was to go to the end with Sis, Nick, Beth and Christie. (He hasn’t said this, I’m basing it on his actions) Along the way, he needed Nick to take out Christie and Beth to take out Nick. I think it’s why he put so much time into Beth and Sis separately. Sis was his first choice to be in the F2 with and I think Beth was a backup plan. (before she started winning comps) Beth is taking out Nick but it’s too soon for Tommy with Cliff, Jess and Nicole still in the house, not to mention Jackson. Out of all the players, I’m curious to see his strategy moving forward. Nick has him scared to be a F2 with Christie if he wants to win. Yesterday, he told Christie, he’d probably put Nicole up with Jackson instead of Beth. He’s still trying to keep his options open with Beth but she must be starting to have winner potential to him too. I’m going to be watching to see if he starts putting in more time with Jess or Nicole because with Sis gone, those are his best options if he sticks with his original strategy. He may also be forced to switch strategies and realize, he may not be able to get to the end with someone who is easier to beat because the people he’s close to keep getting evicted.

Which duo, who already knew each other, had more of an advantage?  Tommy and Christie knew each other very well but they didn’t know the other would be there. Beth and Kat were acquaintances but not really friends. However, they were able to find out in advance and had time to plan a strategy for it. It’s just some food for thought (as long as you don’t chew like Christie) since this week seems to have nothing else going on at the moment.

Catch ya tonight and have a great Thursday.