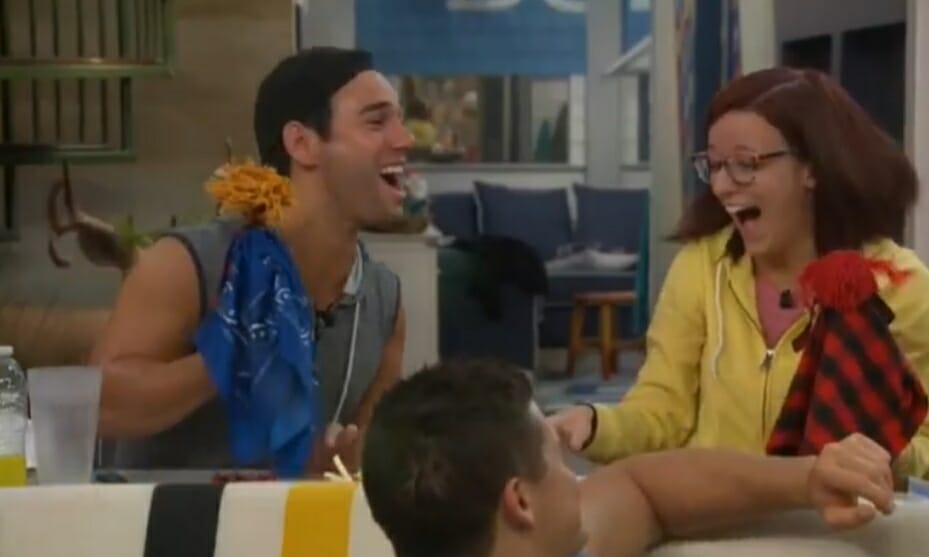 Good morning and happy double eviction day!  Unless something crazy happens today, we’ll be losing Jessica plus one more tonight. The double can’t tell us who’ll win the game but it will at least let us know who heads into the week with an advantage. There’s 3 pairs and one of them is losing a number. The pair who wins the DE hoh will be safe but only one of that pair can play for the next hoh. Therefore, the duo that manages to keep both players during the double but doesn’t win the double has the best odds going into next week.  It’s why there’s been so much talk about who’s going to try to throw it and who isn’t.  They’ve suspected a double and once they know for sure, I don’t think anyone’s throwing it.

If you’re new here, I use Jolly to speed up the typing, not because I thinks it’s a cute shomance name. I use Beth because I’m an a**hole. I’m also not original since #Bething has been all over Twitter all season, every time Beth does something worthy of mentioning.

There was a lot of game talk happening last night but it was mostly everyone trying to convince everyone else they have each others backs moving forward.  If you want details of the conversations, you should read the comments in the previous thread. NK went through the entire thing and they’re all highlighted in blue boxes. It went late into the night or well into the morning, depending on which way you see it. (Either way, gurl had a busy night!) As usual, I’ll stick with highlights only since this is a recap but I really encourage you to read the detailed conversations. Often, some of the subtleties happening in the house are lost with just a recap of the day.

Side note: Nicole didn’t do the best job here. It’s one thing for her to talk to herself and the cameras while sorting things out. She can say Jess made some good points, she worries about Cliff being too close with Jolly, etc. TO US but she shouldn’t be going over those kind of thoughts with Cliff.  Sure, she told him he was staying but during that talk, she also told him that after hearing Jess pitch to her, she was “leaning towards Cliff.” Wth?  This is supposed to be her F2, according to her own words and it’s not very smart. Don’t get me wrong, not only is Nicole my favorite person on the show, she may actually be my favorite person out of all 21 seasons. I haven’t put that much thought into it but as I quickly think back through all the seasons, I’m not sure I’ve ever liked a hg as much as I like Nicole. It doesn’t mean I think she’s killing it in this game because she isn’t. Yes, the arguements been made she’s the deciding vote a lot so even without an hoh, she’s played an important role. She has, but it’s not from strategy, it’s because the house sees her as wishy washy.  She’s played the game more emotionally than I would like but I’ll give her credit for not voting emotionally when it gets down to decision time. I’m just saying she needed to do a better job of hiding the emotional process she goes through leading up to her decisions. The other players would see her as a stronger player even without comp wins. (She’ll still have to win a couple comps to have a shot because players in recent season value comp wins more than older seasons)

Everyone is partially correct about each duo playing the same strategy.  They still are but the biggest shift has been over wanting to throw it. They all wanted to throw it and now, no one wants to throw it, except maybe Tommy but he won’t do it unless he can throw it to Christie. (He wants to go after Jackson and Beth but he wants to remain innocent when it happens) They’ve all changed their minds close to the same time this week and it’s a little comical.  Everyone is still lying to everyone but the difference is, now everyone knows it. However, it hasn’t caused any of them to stop yet.

Taking my personal thought about these people out of it, I can honestly say, I have no idea what I want to happen tonight.  I’d love to see Tommy and Christie on the block together. I’d love to see Tommy and Beth on the block since they’re the only 2 who haven’t been there. I’d also like to see one of Jackson or Beth go because they’ve been in power for a month.  I don’t want Cliff or Nicole to leave but I wouldn’t mind seeing what the remaining one could do in the game if they weren’t seen as a duo anymore. Now that I’m thinking about it, I may really enjoy tonight because there aren’t many scenarios that could disappoint me.

The only situation I think would be bad is if one of the pairs wins the DE hoh, takes someone out, and the other half of that same duo wins the next hoh. I’d rather lose one of each over the next week to make for a more interesting end game.

See ya tonight and have a great Double Eviction Thursday!